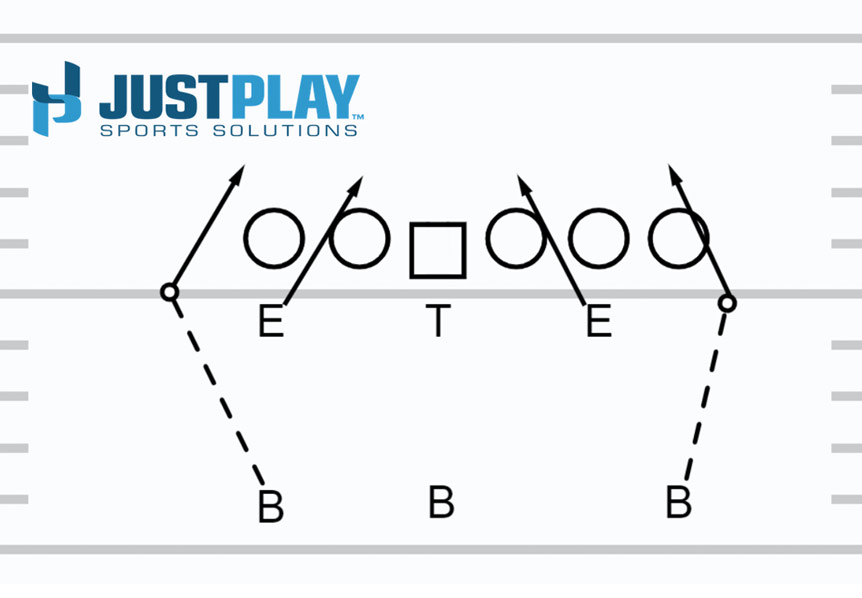 Across the college football landscape, there is an increase in hybrid defense and defensive personnel groupings. The need to be multiple, and present different looks to the offense, has never been more important. After all, offensive coaches have done a fantastic job studying exactly how defensive players are coached to align and react.

Offensive play-callers are identifying with great success where on the eld or who on the defense they can put under the most stress. Offenses are forcing defenses to cover every yard of the eld both horizontally and vertically. Defensive coaches are fooling themselves if they think they can just line up in a couple of static fronts and play base defense all game.

Every year, there’s more of an emphasis for defenses to generate turnovers and create lost-yardage plays to put the offense behind the chains. When defenses create negative plays like sacks and tackles-for-loss, it pushes the opposing offense out of its comfort zone. Offenses are comfortable when they know exactly how the defense is going to line up and react. We believe our 3-3-5 scheme allows us the flexibility to be multiple in our fronts, stunts and blitzes without having to constantly substitute personnel.

Why is it that on 3rd-and-long — an obvious passing situation — that there are all kinds of unique defensive alignments and personnel groupings? Clearly the defense is trying to confuse the quarterback to prevent him from identifying the coverage and to also perplex the offensive line to create breakdowns in pass protection or at least get favorable one-on-one pass rush matchups. Why do defenses tend to show less variety in fronts, stunts and blitzes on 1st and 2nd downs? At San Diego State, we believe the defense should always be the aggressor. It should constantly be trying to create some mental confusion for the opposing offense.

The credit for this philosophy goes to our head coach and defensive play caller Rocky Long. He always challenges our defensive staff to give our players a schematic advantage and constantly asks, “Why not?” in defensive game-plan meetings.

Here I will diagram and explain a few of the different ways that we get into two very traditional fronts (Over and Bear). Hopefully, it provides some insight into how we game-plan the front and why we believe the 3-3-5 gives us the best flexibility to achieve the multiple looks we want to present to the opposing offense.

For simplicity, I’m only going to diagram the five offensive linemen and a tight end against our three defensive linemen and three linebackers to illustrate a couple of the different ways we create these fronts. Obviously, there are game-plan decisions that have to be made regarding what coverages you want to play, how best to disguise them, and how to insert additional defenders like safeties into the box to account for all the gaps an offense can create.

The easiest way for us to get into an Over Front is to kick the defensive line one way or the other, and walk a linebacker down to play either the weak-side 5-technique or a head-up 8-technique on the tight end as shown in Diagrams 1-2. You must decide which version is better for you based upon your personnel and the opponent’s. 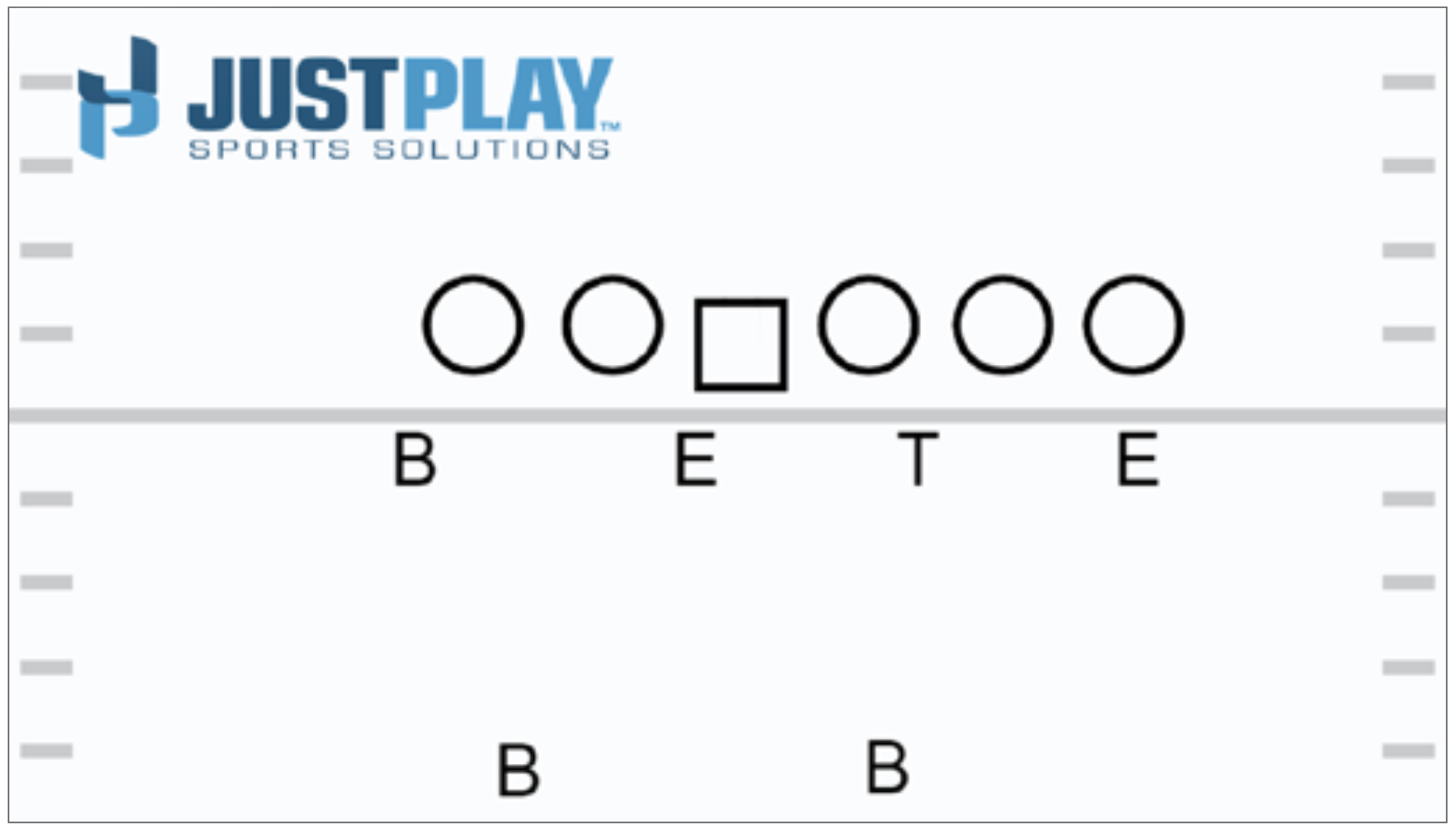 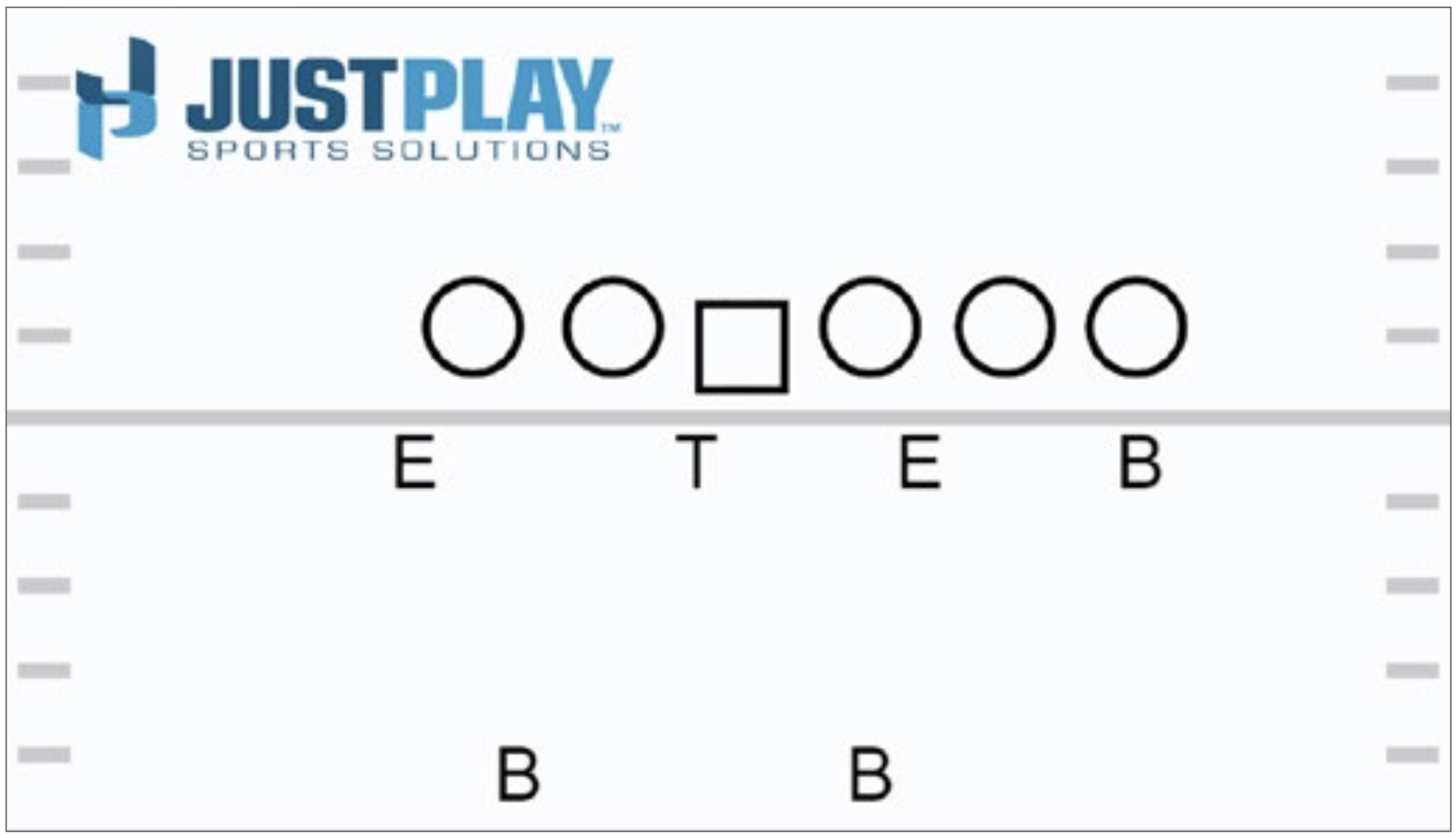 Against a team that likes to run the ball to an inline tight end, it’s likely better to kick the defensive line strong so you have a defensive end matched up at the point of attack against the tight end. On the other hand, maybe your best defensive lineman is your nose tackle and you want him shaded on the center as much as possible to disrupt the snap and control the interior of the line of scrimmage. In that case, you would want to bring the outside linebacker down to the tight end and kick your defensive end down inside to play the 3-technique.

Perhaps you have a good edge-rushing outside linebacker and you like the matchup of him against the opponent’s offensive tackle. You most likely want the ability to do both, because there are going to be situations in which you prefer one over the other. It’s up to you to decide what fits your personnel the best and how much variety you can teach and practice while still effectively executing
the scheme.

The two other variations of Over Front that we have the flexibility to get into start with our defensive line in a stack alignment. In that formation, the nose tackle is head-up on the center and the defensive ends are head-up on the offensive tackles. is is referred to as a 4-0-4 alignment. As seen in Diagram 3, a linebacker will walk down on the tight end and the defensive line will slant away from the tight end on the snap. After the defensive line executes its movement, we are in an Over Front. is can be disguised by blitzing the outside linebacker o the edge to the tight end instead of showing it in pre-snap alignment. How you decide what you want the outside linebacker to accomplish and the technique you want him to play with will dictate whether you prefer him as a blitzer or part of the front pre-snap. 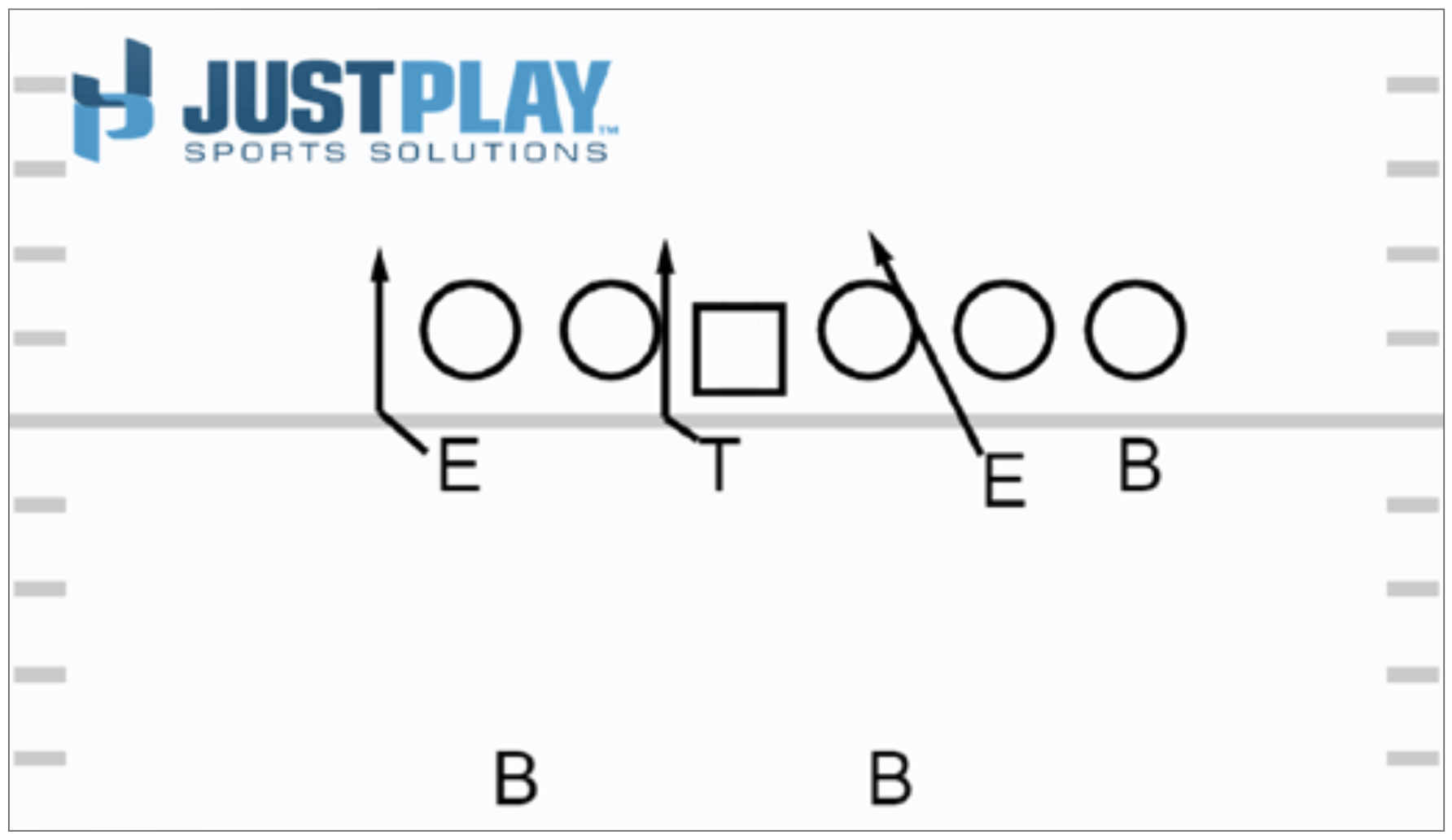 As shown in Diagram 4, we are still in Stack Front, but we are going to create the 3-technique to the tight end by blitzing a linebacker. It’s your preference whether the middle linebacker or your outside linebacker is the B-gap blitzer, but in the end, you are still just playing Over defense. is has been a particularly effective variation for us against the spread offenses that like to base out of four-wide receiver sets. It disguises well and you can get the 3-technique exactly where you want him (for example, to or away from the off set running back in the shotgun). 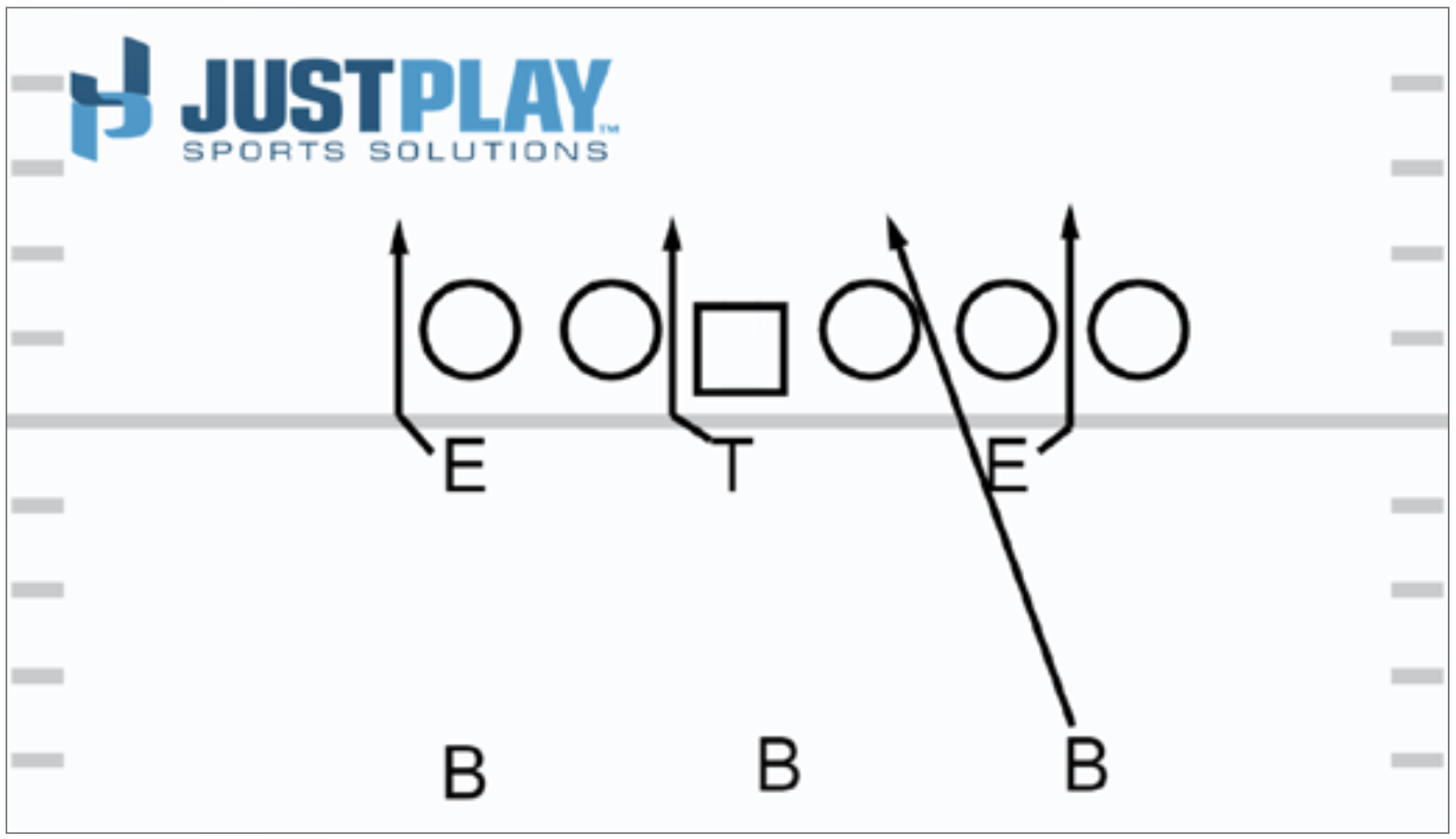 Bear Front is becoming increasingly popular in defending the inside zone against the spread rushing attack, because it allows you to account for the interior gaps so you can walk second-level defenders out to an alignment to better play both run and pass. As shown in Diagram 5, the simplest way for us to get into a bear front is to simply walk both outside linebackers up on the line of scrimmage to become the 9-techniques and align the defensive ends in 3-techniques. 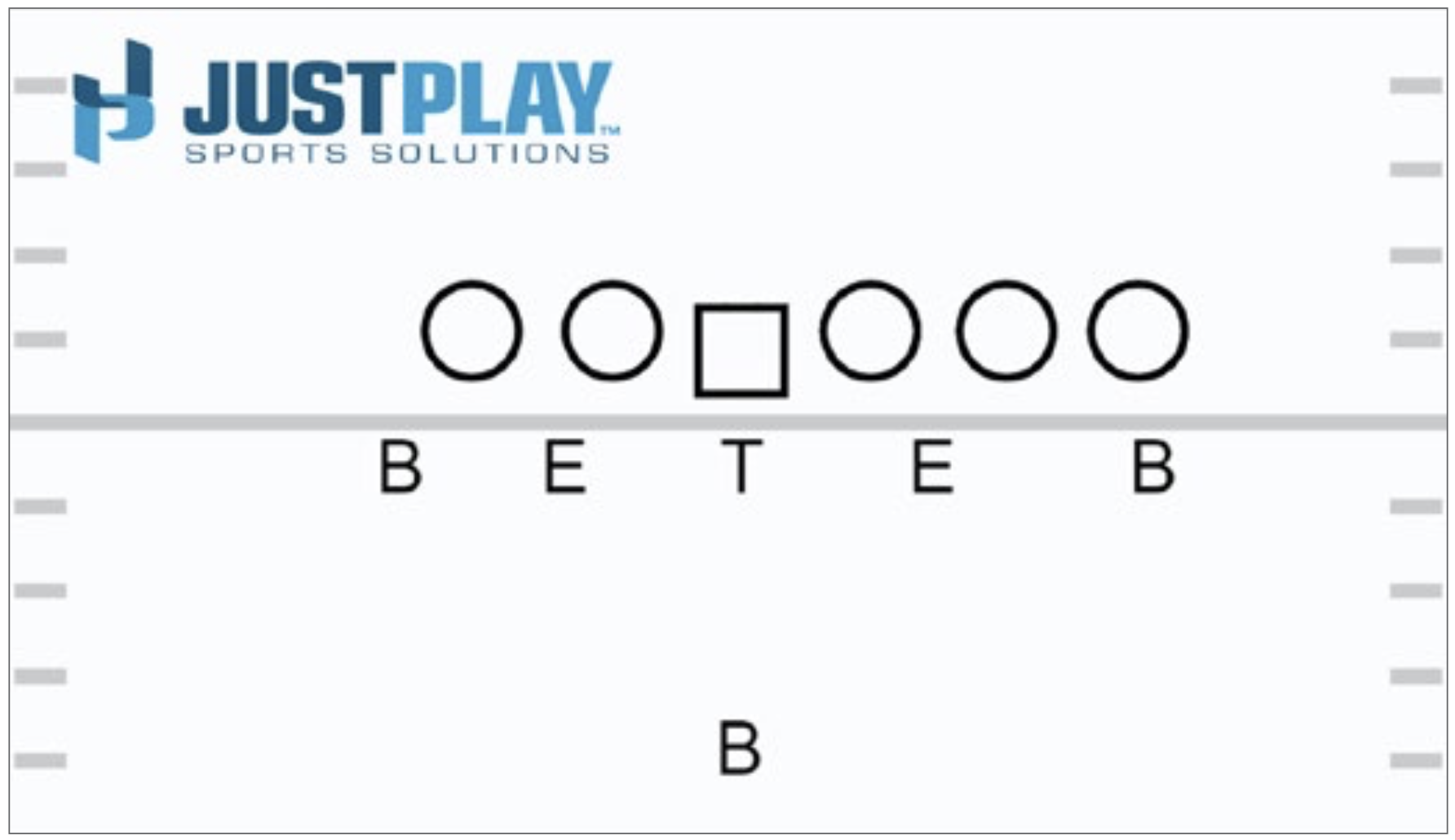 Similarly, in Diagram 6, we will start in a Stack alignment and stunt into Bear. We want our players to understand that pinching the defensive ends from 4-techniques and blitzing the outside linebackers off the edge represent a very aggressive defense, and we are trying to get penetration into the back eld to create negative plays. 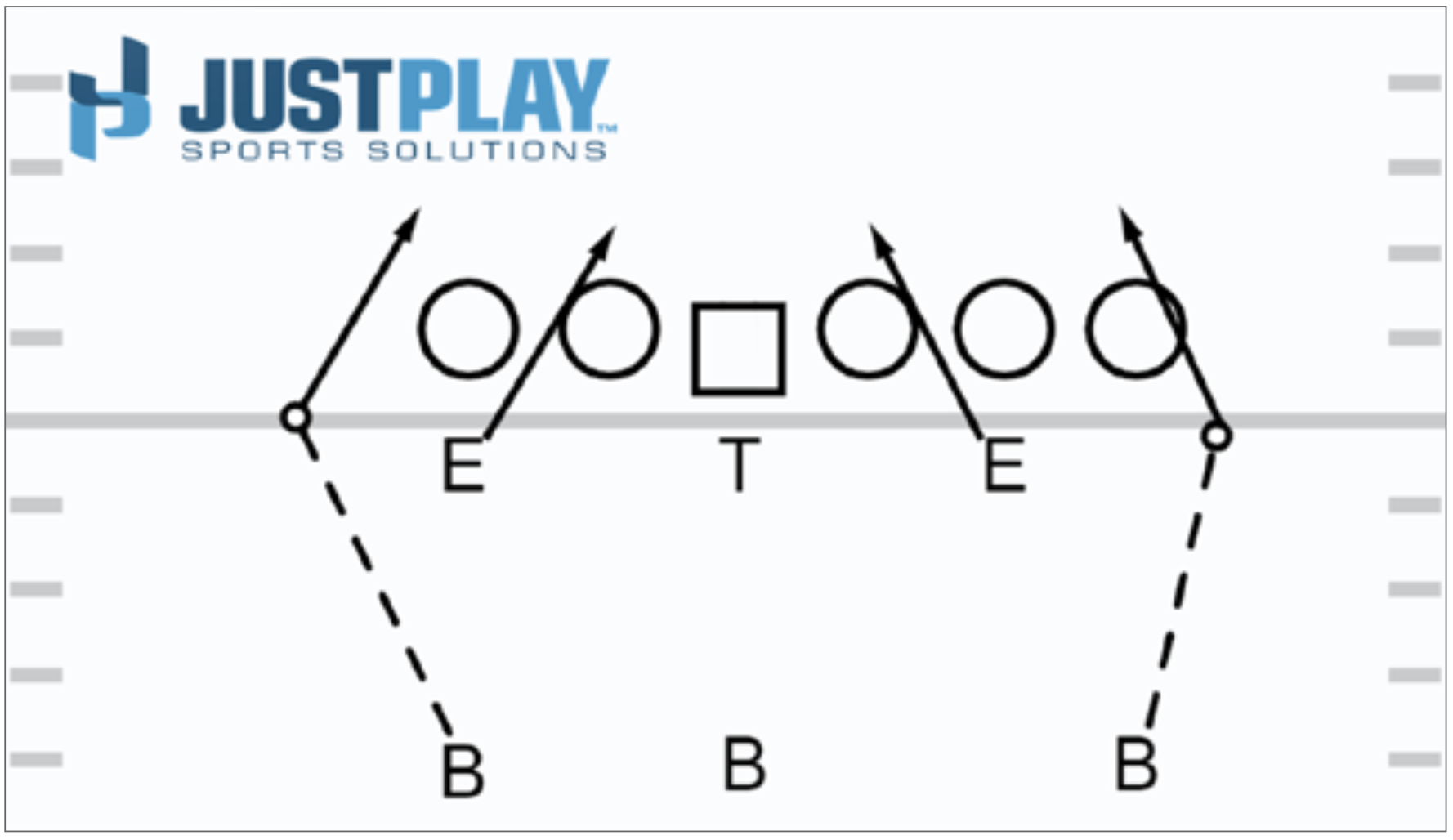 The other two ways we get into a Bear Front are illustrated in Diagrams 7-8. Just as we diagramed earlier in creating an Over Front by blitzing a linebacker into the B gap, we will accomplish the same thing by blitzing both outside linebackers into the B gaps. It is necessary to give your linebackers aiming points so you get them to accomplish what you want out of the blitz. Those aiming points could be the outside shoulders of the guards, the inside shoulders of the offensive tackles, or to hit the gap vs. teams with big splits and try to get as much penetration as possible. 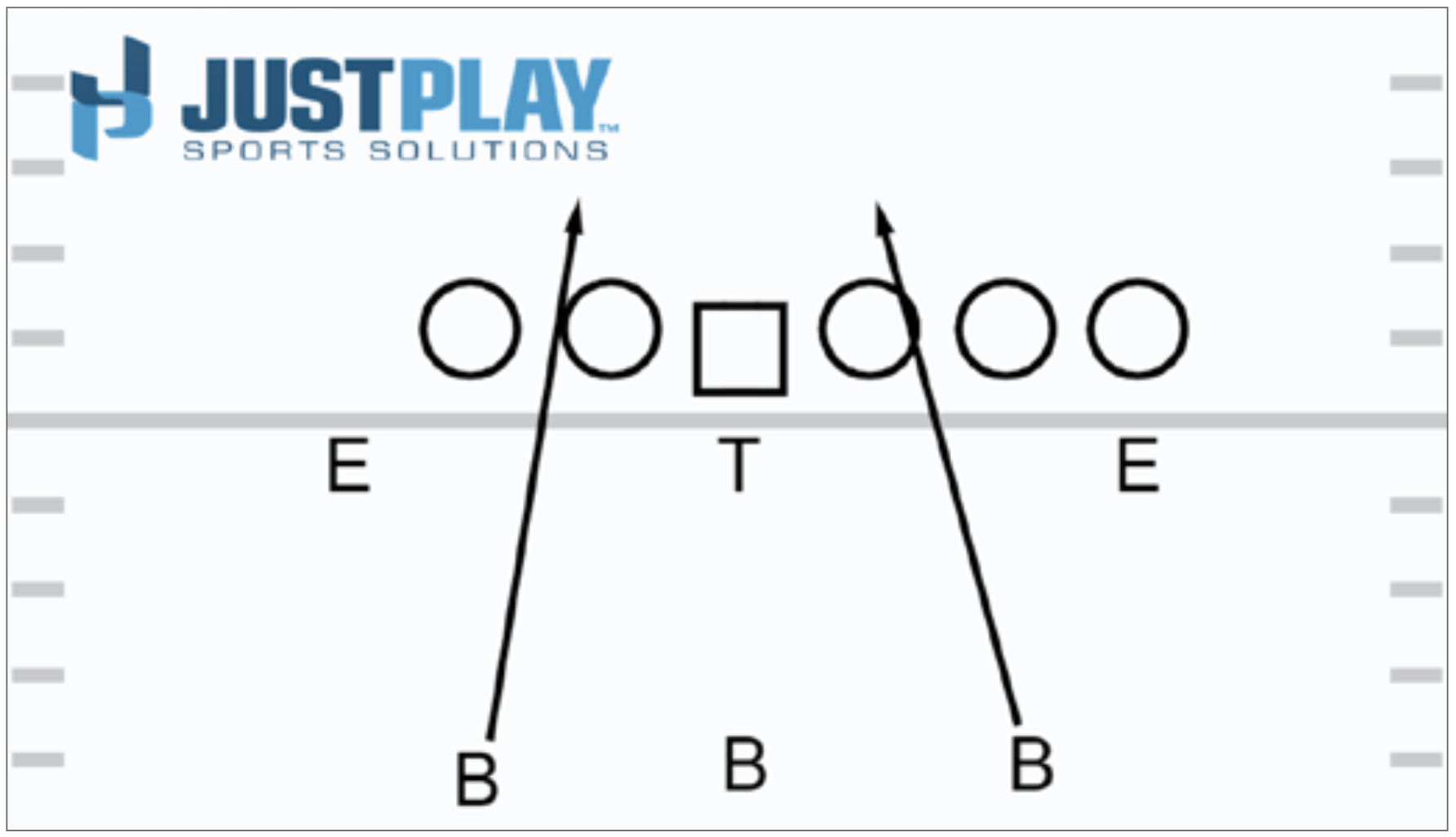 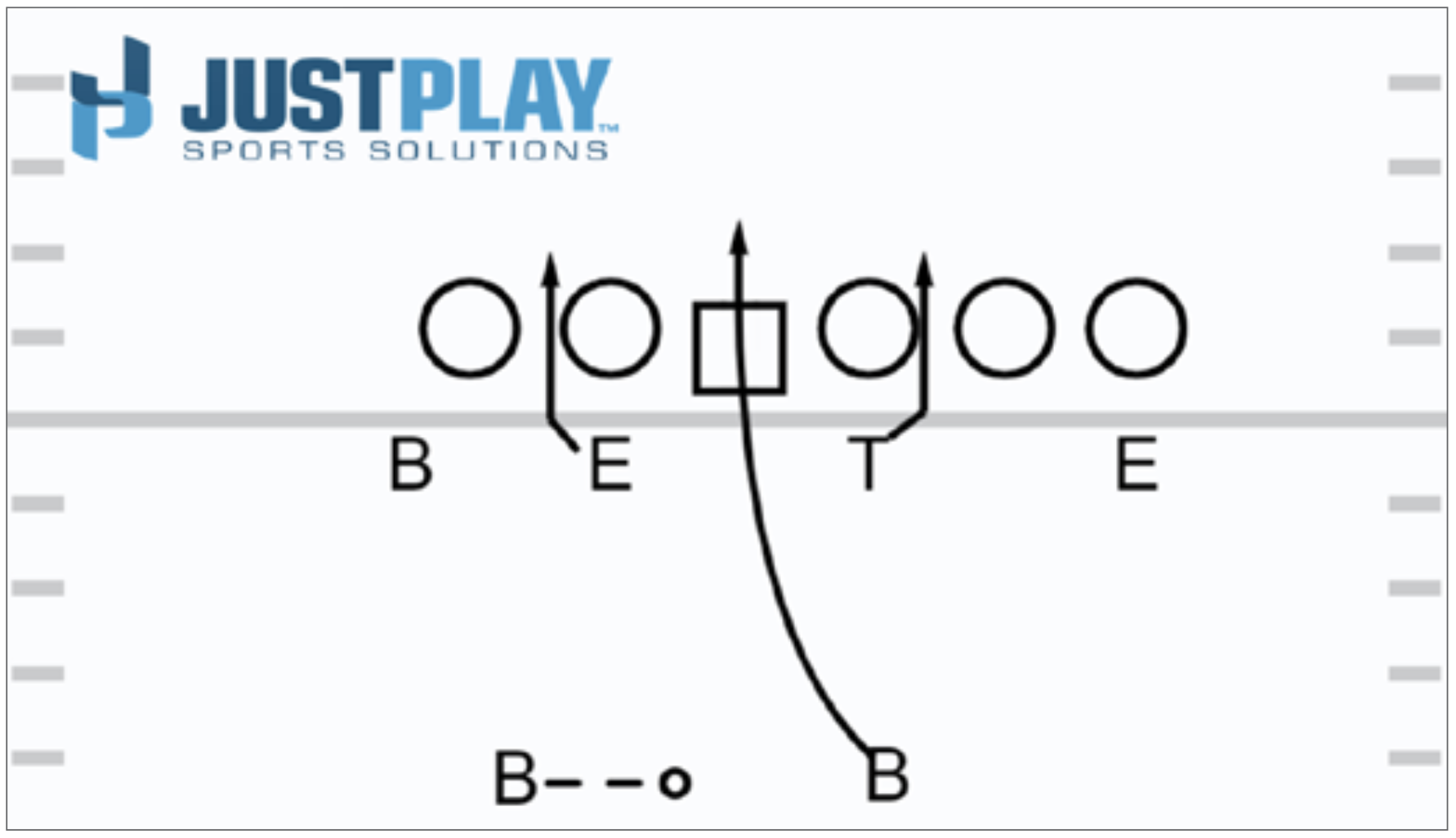 The last variation for getting into a Bear Front starts in an Even Front with two head-up 2-techniques on the guards. On the snap, both 2-techniques will loop to become B-gap players and one of the linebackers will run a blitz right down the middle of the center, effectively becoming the nose guard.

You’re probably not expecting your blitzing linebacker to become a 2-gap player the way you would a true nose tackle, but you might get better penetration up the middle by cutting your linebacker loose and allowing him to penetrate o the center’s movement. You might also like this matchup in a pass-rush scenario if you think the quickness of your linebacker can cause trouble for the center.

Ultimately, there is no substitution for effort and intensity in the game of football, but as defensive coaches we must look for new ways to create confusion and hesitation in the minds of opposing offenses to give our players the best opportunities to generate negative plays.

We try to be as multiple as we can effectively execute. There is no sense in having a bunch of variety if you can’t successfully practice
and employ it. The key is finding that perfect balance of variety and multiplicity in your fronts, stunts, blitzes and coverages, while still being able to get enough reps in practice to be proficient on game day.