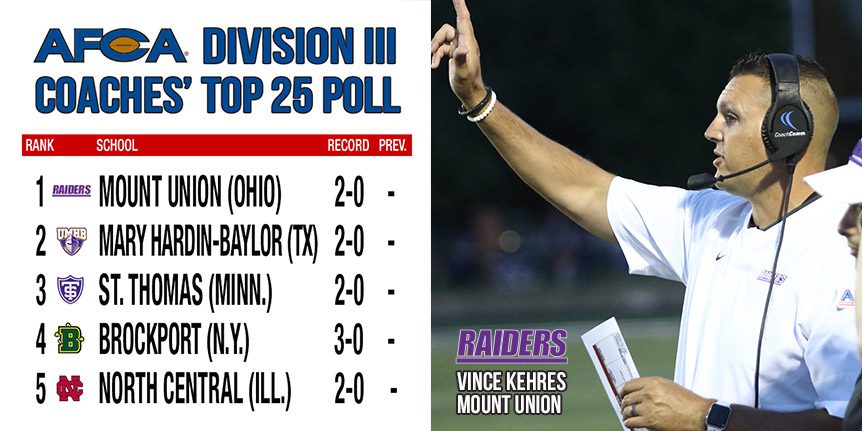 Mount Union (Ohio) starts the 2018 AFCA Division III Coaches’ Top 25 Poll in familiar fashion – at No. 1. The Raiders, who received 45 first-place votes, defeated Baldwin Wallace (Ohio) 56-21 to improve their record to 2-0. Since the AFCA Division III Coaches’ Top 25 Poll began in 1999, Mount Union has begun the season ranked in the top spot 13 times, nine more times than their closest competitor, Wisconsin-Whitewater, who has been ranked No. 1 four times to start the season.

Related Article: McNeese Jumps Into The Top 10 Of The AFCA FCS Coaches Poll

Mary Hardin-Baylor (Texas) comes in at No. 2 after receiving six first-place votes. The Crusaders are followed by St. Thomas (Minn.), Brockport (N.Y.) and North Central (Ill.), who round out the Top 5.

There is only one Top 25 matchup this coming weekend, and it is a Top 15 battle as No. 1 Mount Union plays host to No. 15 John Carroll (Ohio) in an important Ohio Athletic Conference contest.