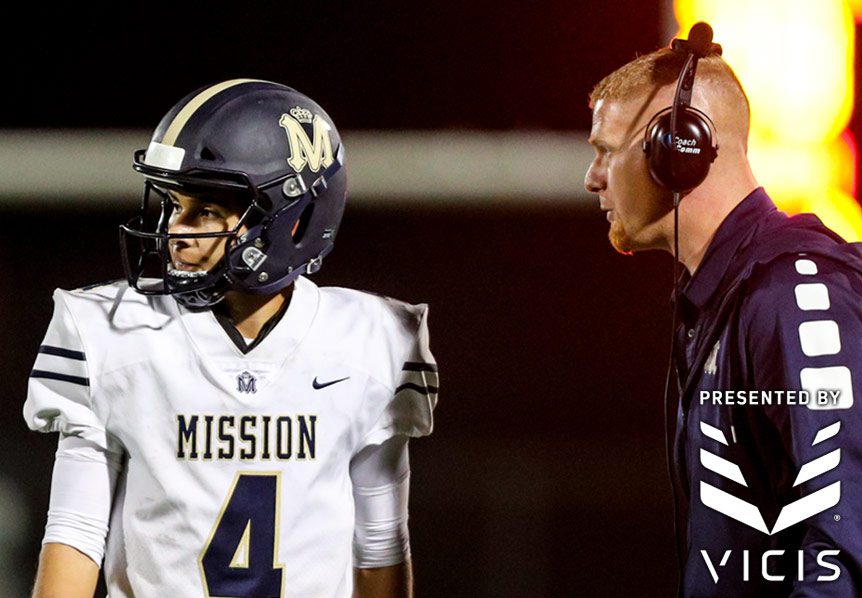 David Schuster was sitting in his coaches’ meeting at Grace Brethren (Calif.) High School when the rep from VICIS arrived and started talking helmets. Schuster’s mentor and head coach Josh Henderson had invited VICIS in for a discussion about helmets, technology and their impact on player protection.

“Yeah, I was in that meeting when they were going through it,” says Schuster, who was an assistant coach for Grace Brethren at the time. “It definitely sparked an interest for me. You’ve seen the video. Two helmets, side-by-side, impacted at the same time. You see the impact and the movement of the head and the helmet. It’s just kind of undeniable. You know it when you see it. There’s something different about that VICIS helmet.”

Fast forward a couple years, and Schuster is now the head coach of his own program at Mission Prep (Calif.) High School, rebuilding a team that had experienced a lot of success in the past, but in recent years had declined.

“Part of that was safety issues in the prior program. They had some problems with injuries that needed addressing,” says Schuster, who’s been rebuilding the program for a little more than two years. “Also, we had moved down to eight men. We have moved back to 11 men now.”

Because of the way the last program wound down, Schuster was determined to make sure the Mission Prep student-athletes, parents and alumni knew he was serious about rebuilding the program “the right way,” and this time, he had help.

“We had several families and benefactors who were willing to do something very similar to what they did at Grace Brethren,” says Schuster. For the 2018 season, the entire program at Grace Brethren switched to VICIS helmets. “I had a conversation with those folks and I thought, ‘Hey, we have the capability to do this. The helmet is undeniable.’ I got the idea originally from [Henderson], just watching him do it, and I saw the impact those helmets made. I just remember thinking, ‘This is big. This is meaningful. Let’s do it.'”

It was a huge splash, says Schuster. The donors helped Mission Prep purchase 48 VICIS ZERO1 helmets for their players, outfitting the entire team. It was an extremely strong move that showcased the fact the program had indeed changed, and the focus on student-athlete safety had never been higher.

“When VICIS showed up and fitted everyone out, there was so much energy and buzz and excitement. We had media there,” says Schuster. “With the kids, the excitement was audible. You could see it on their faces. You could feel it in the air. They were incredibly excited.”

Schuster and VICIS worked together to generate that excitement, setting the stage and building understanding among student-athletes regarding why the helmets were different.

“We brought in a test helmet for four weeks and gave it to our hardest hitter, our middle linebacker,” says Schuster. “We had him test it out for a month. Everyone got to see him wear it and got to hear him talk about it. So by the time we moved forward and those helmets showed up, everybody couldn’t wait to get theirs. There was definitely an anticipation factor.

“Our kids put it on their heads and told us it just feels better, that it just fits better and feels more balanced, even though technically, I guess, it’s a tiny bit heavier. Then they started hitting in practice, and that’s when everything changed.”

Schuster’s VICIS rep warned him that during practice, Schuster would think that the kids weren’t hitting that hard because coaches weren’t going to hear the impact of helmets in the same way they did prior to VICIS.

“I’m thankful he prepped me for that,” says Schuster. “We started practice and I thought, ‘Oh man, the media’s here, the kids are all excited and pumped up, so they don’t want to hit.’ But that is just what the helmets sound like in practice. They’re quieter. They aren’t cracking out loud. The kids were really hitting each other. They instantly felt the difference. They told me they barely even feel the contact, and it was that moment when we looked at each other and said, ‘Yeah, this is something different.'”

The complete migration to VICIS helmets had two certain impacts in the community. First, it helped crystalize the way the student-athletes perceived their leadership.

Second, it was a major signal to the community and to the Central Coast of California at large that there something going on at Mission Prep and that the program was willing to make the changes necessary to protect student-athletes.

“It certainly makes it easier to look at a mother and go, ‘Hey, we are going to take care of your child in every possible way, and we put our money where our mouth is,'” says Schuster.

The end of the 2018 season saw Mission Prep go undefeated and win the school’s first California Interscholastic Federation Central Coast 8-Man Championship. While correlation does not imply causation, the new helmets certainly helped Schuster and the Mission Prep players grind and excel day after day in a long, hard-fought season.

“I can tell you that there were a lot of defining moments for us during that season,” says Schuster. “For sure, one of them was the day that VICIS showed up.”