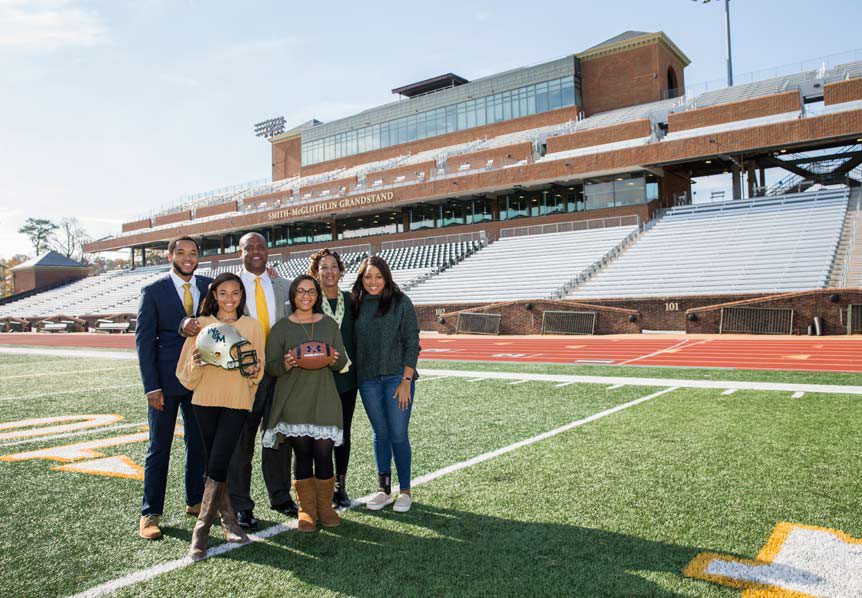 It’s not often that turning points in our lives stand out so brazenly from the background of our everyday grind that we can immediately recognize them for what they are. The turning point in Mike London’s life arrived at the business end of handgun and the quick pull of a trigger.

But, we’ll get to that. First, it’s important to understand a little bit about Mike London’s formative years and their association to the game of football, a game that he would play and coach at the highest levels, and still coaches today as the brand-new head coach at the University of William & Mary.

London “lived all over” in his early years. His father is a veteran of the United States Air Force – now retired in Hampton, Va. – who was a navigator on C-110 aircraft. In fact, he had the distinction of bringing late Arizona Senator John McCain back from Vietnam after he was a prisoner of war.

“Growing up, I lived all over the world,” says London, who was born in West Point, New York. “Africa, Germany, California, Hawaii, all over. My dad, he fought in the Vietnam War, and he’s alive today. He’s fighting some of the effects of fighting in the Vietnam jungles, the Agent Orange, things like that. It’s tough to watch, but at the same time, his opportunities and my opportunities were extended just by having an expanded world view, making friends and losing friends and making new friends, really just being adaptable to where you are and making the best of it.”

London knew early in life what he wanted to be when he grew up. He recalls early childhood memories of seeing the president speaking at Air Force bases.

“I noticed these guys standing behind him,” he says. “They had the earpiece in their ears, the wind was blowing and this guy’s coat blew back and there was a machine gun hanging under his coat. I didn’t know what they were doing, but I wanted to do that. Seeing a guy sworn to protect the president of the United States, sworn to protect life and liberty – I grew up around that – that’s what I wanted to do.”

As London grew, so did his athletic prowess. He played football for the University of Richmond from 1979-1982 as a defensive back before going pro as a defensive back for the Dallas Cowboys in 1983. His career with the Cowboys was short-lived, and so London had a decision to make.

He enrolled in the police academy of Richmond, Va., which at the time was located at Virginia Commonwealth University. He remembers fondly this period in his life.

“If you can imagine it, I was cut from the Cowboys and I was a corner/safety, so I’m all rocked up,” he says. “I’m lifting, I’m training. They were fitting me for my Kevlar vest and they want to know if I want it loose, and I’m like, no, I want it really tight. I got my uniforms tailored to show off my ‘other guns.’”

He was all set and ready to make a difference for his community.

It was a new chapter in London’s life, and he embraced it. London began his police work as a patrolman in Richmond, working traffic stops and writing parking tickets. Not long after, the Richmond Police Department launched a new program called the Selected Neighborhood Action Patrol (SNAP). It aligned perfectly with London’s idea of the type of police work he wanted to do.

“It was plain clothes, you ride around in unmarked cars, you could grow your Michael Jackson afro, earing in the ear, all that stuff. I was like, ‘Sign me up. That’s what I wanted to do’.”

London worked maybe a year in the SNAP program doing “neighborhood action patrol.” Then, he was promoted quickly to detective in Richmond’s street crimes unit. It was London’s chance to get closer to working with the FBI, the Secret Service, the Department of Treasury.

The street crimes unit introduced London to an extremely dangerous lifestyle. If someone was a serial bank robber or burglar, it was London’s job to follow the individual.

“It was kind of hairy, because we knew he was going to break into a house or rob a bank, but we had to follow him knowing that lives may be on the line,” he says. “After they’d make the attempt, we’d rush in to apprehend the suspect or get him coming out. Then we’d use the forensic evidence based on what we collected at that crime scene and try to match it to other crime scenes based on what the individual may have left behind.

“We followed around the worst of what people did. They were murderers, robbers, burglars, drug dealers. We followed career criminals. We got involved in foot chases and fights. I’ve seen the worst of what human beings do to each other, from homicides to assaults, just so many things. But you just gotta be Batman.”

It was one of those nights, sitting in an unmarked car on the side of the road with his partner, Craig Johnson, that London’s life was about to change. Little did he know, but he was about to come to a crossroads of his own.

The call came in at around midnight. A KFC had just been robbed “somewhere in south Richmond,” says London, recounting a situation that has obviously played repeatedly in his mind for years.

“The call comes out that individuals were just involved in a robbery and we get a description of the vehicle,” he says. “My partner and I are in an unmarked car. There’s no traffic around, but there’s a van stopped at a traffic light.”

The description of the vehicle matched the van London and Johnson stared at from their unmarked car.

“We’re calling for other officers in terms of marked cars to pull the van over, and the van kind of took off,” he says. “We followed behind it. It sped up, we sped up. It slowed down, we slowed down.”

Eventually, it became clear that the individuals in the van had figured out something was wrong with this car following them. The van pulled into a driveway and then turned all the way around, facing out toward the street

“We pulled into the driveway ourselves,” says London. “My partner was driving, I was in the passenger seat. We got out of the car and had our guns drawn. We said, ‘Police officer. Let me see your hands.’ As we approached the van the driver in the van smashed on the accelerator so, the car started to kind of fishtail. Obviously, they were trying to get by us or through us to get away. I don’t know [if it was] training, or stupidity, whatever it is, I jumped into the front window – the driver’s window – and I’m wrestling with the driver.”

“We’re going back and forth, and all of a sudden the driver pulls out a handgun and points it at me, points it at my face and he pulls the trigger. I heard like a click.

“I don’t know, like a moment in time just froze. When that happened, I thought about everything, my parents, my family. Just like, time came to, it just stopped for that moment. Thank God that it didn’t go off, the gun didn’t go off so, I let go and the van got in front of us and got away.”

The van was stopped by police officers a mile or two away and the individuals were apprehended. They were charged with armed robbery, commission of a felony with a firearm, and attempted capital murder on a police officer.

While this seemed like an open-and-shut case at the time, it didn’t turn out that way.

“It came back down to myself and the other officer involved. When they got away from us they got rid of the handgun so, when it came down to us it’s like, ‘All right. Detective London, where’s the gun? We couldn’t find the gun and without having the gun the aspect of attempted capital murder, we can’t convict on that,” he says. “The only thing those kids were convicted of was trying to run me over with car, and they got probation.”

It was a low point in London’s life and it forced him to reconsider what he wanted to do with the life he’d been granted.

The journey that London made over the last 30 years in the coaching profession stems from his roots growing up the son of an Air Force veteran. His father coaches all the teams he played for growing up: football, baseball and basketball.

“He would coach the little league teams, and my mom would coach the cheerleading teams,” says London. “My dad became the model of coaching and teaching, affecting and changing lives. He never said a curse word. His curse word was, ‘You numb-ball.’”

London saw how he made other kids feel. Maybe they weren’t the most talented players, but they gave a lot of effort, and he saw that if a coach infuses positive characteristics into young people, what comes out can’t be measured in a 40-yard dash or on the weight bench.

“I wanted to affect lives and be an asset to the FBI or whatever law enforcement I got into,” he says. “When that door closed, I knew I could still affect lives by drawing on the inspiration and the example that my father set.”

When London took over the head coaching position at Howard University in 2017, the team was 3-19 overall, and 1-11 on the road, prior to London’s arrival. London quickly turned the team around, getting a huge FBS road win vs. UNLV as a huge underdog. He finished the 2017 season with a 7-4 record, with four of those losses coming at less than a touchdown’s difference.

The secret to quick success is no secret at all, London says.

“First of all, you surround yourself with really good people,” he says. “I had really good coaches and I was able to hire all of them myself without any other issues involved. They’re great teachers; they’re role models and mentors. We adopted the philosophy of ‘Mission Possible.’”

The standards he set for the team were straightforward:

“The last one really was based out of being a police officer,” says London. “I learned that, being a police officer, what comes out of your mouth has the opportunity to escalate or de-escalate a situation. It comes from having to ask tough questions and diffusing volatile situation. You can encourage and discourage people with what you say to them. Treating people with respect is critical.”

“People don’t care about how much you know until they know how much you care,” says London. “It’s tough being in this profession when people associate you with wins and losses, but if you let that define you, then it destroys you. But if you just pray for a stronger back to carry more people, give them a sense of solace, a sense of direction, a sense of hope, if you can demonstrate that, then that’s servant leadership, and its impact is significant.”

Paul Markgraff is the managing editor of AFCA Magazine. If you have questions or comments, he can be reached at (608) 423-2703 or pmarkgraff@threecyclemedia.com.