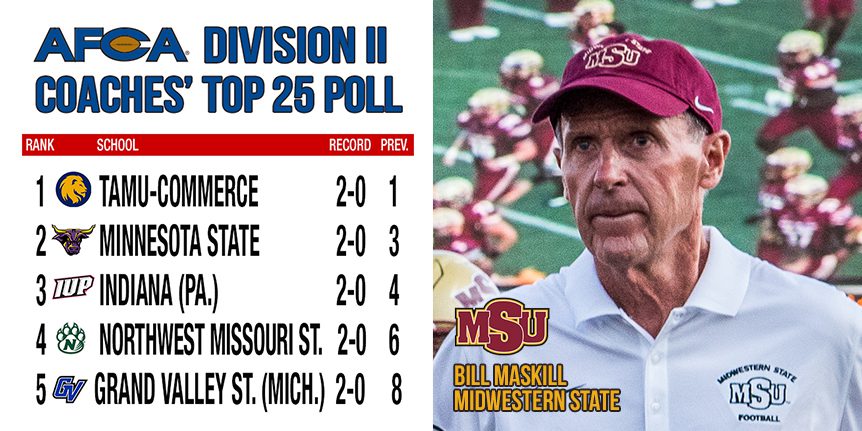 Midwestern State (Texas) out-scored West Florida, 35-3, in the second half to run away from the second-ranked Argonauts 38-17. The win jumped the Mustangs up three places to No. 7 in the AFCA Division II Coaches’ Top 25 Poll and dropped West Florida down to No. 13.

Texas A&M-Commerce still holds the top spot with 26 first-place votes. Minnesota State moves up to No. 2 with three first-place votes. The Mavericks are followed by Indiana (Pa.), Northwest Missouri State and Grand Valley State (Mich.), who round out the Top 5.

Ashland (Ohio) and Findlay (Ohio) dropped out of the poll, which made room for No. 23 Pittsburg State (Kan.) and No. 25 Southern Arkansas. This is the Gorillas first appearance in the AFCA Division II Coaches’ Top 25 since October 12, 2015. The Muleriders were last ranked at No. 22 in the 2017 preseason poll, but dropped out after the first week and never returned.