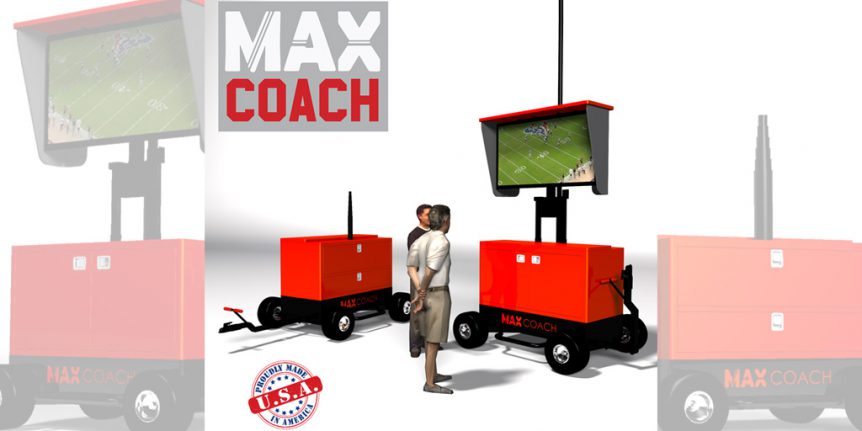 For decades, football coaches taught the game using the same tools. It’s pretty common to see black and white photos of coaches sketching out plays on a chalkboard, demonstrating scheme and technique with tools that never changed all that much.

Over the last decade, however, teaching tools have evolved rapidly, and in turn coaches have adapted to new teaching styles. Ask any coach, and you would find that student-athletes learn differently than before, as well. They are visual learners, and rightly so. Screens varying in size surround them on all sides. From their phones to their tablets to their laptops to their TVs, visual learning and information consumption dominates their lives.

Insane Impact, the Iowa-based manufacturer of portable, weatherproof LED screens and jumbotron displays, is producing a transformative screen that will allow coaches to teach players in ways never‑before envisioned.

Max Coach makes large-scale visualization and learning a reality. It contains a super-bright outdoor display screen (up to 65 inches) that rises to 10 feet in the air, giving the entire team a clear view of film, instant replay, or anything that can be displayed on a screen. Its camera tower rises 30 feet, giving a live-action, birds-eye-view of the field. Max Coach also integrates with the coach’s current camera system. On top of all that, players can actually see it. The Max Coach LED screen is visible in pure, direct sunlight.

Max Coach is towable and easy to move, plus it provides for private viewing when necessary, with two front doors that swing open to allow viewing when the screen is retracted into the case. Its fold-down desk houses a dynamic workspace for A/V operators, and it is powered by lithium‑ion battery, which provides up to 5.5 hours of viewing time.

“Kids are visual learners these days. They stare at screens constantly, so it makes sense to bring a screen out to the practice field so they can learn instantaneously instead of learning by being told later. It’s so incredibly advantageous for coaches to have the opportunity to give players that instant feedback,” says Anthony Long, president of Insane Impact, the makers of Max Coach. “We envision coaches teaching athletes using Max Coach on the practice field. We envision this being used for sideline replay during games, where legally applicable.

“It’s a product that enables coaches to provide instant feedback via replay and telestration, allowing them to correct a player on the spot vs. waiting for the film room to tell them. It’s about ‘coaching now vs. later.’ Coaches can watch highlights or plays from opposing teams now vs. later. They can coach in real-time based on real situations right now, vs. waiting until later to break down film.”

Every last inch of the Max Coach platform has been engineered with a single purpose in mind: teaching players with urgency. With Max Coach, gone are the days of five offensive linemen and a coach huddled around a tablet on the sideline squinting in a vain attempt to see the screen. Max Coach is an all-encompassing, consolidated replay system operated off a single iPad, for ultimate convenience.

“With Max Coach, we are making visual learning more accessible,” says Long. “We’re giving coaches the confidence that they have a state-of-the-art teaching platform that accelerates the learning process. No more power strips or tents or banquet tables. No more tablets, flight cases or extension cords. No more hovering around an iPad. We’re bringing your learning platform to the field. Anything that can plug into a TV can plug into this. It’s going to change the way we coach the game of football.”