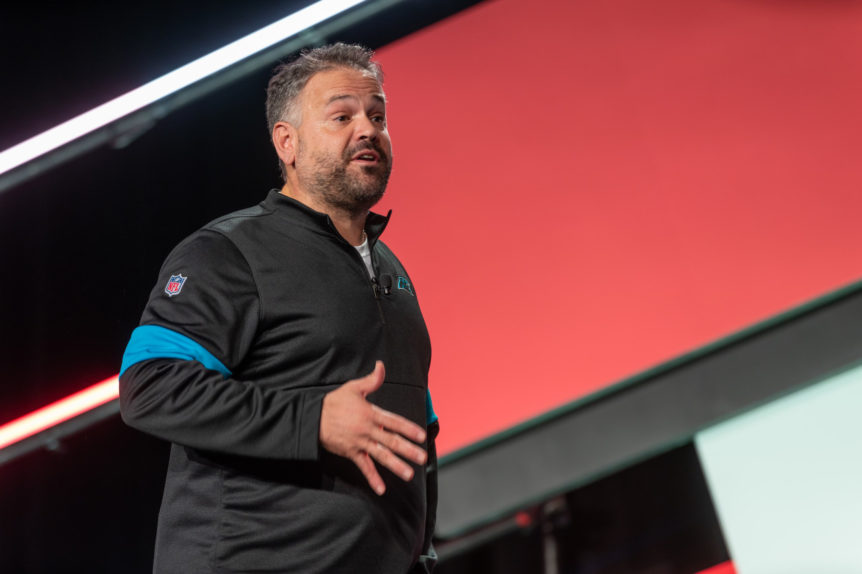 The Carolina Panthers’ recent hire, Matt Rhule, outlined key components to building a winning program, some of which included goals, definitions of brand and toughness, standards, a plan to win, and advice for young coaches.

In his speech, Rhule delivered a powerful address to thousands of fellow coaches across all levels and divisions at the 2020 AFCA Convention, which was held in Nashville, Tennessee.

Early in his speech, Coach Rhule used an illustration to help describe the importance of creating a strong, consistent, and recognizable brand.

“When you order a Diet Coke and the Diet Coke comes and it’s got the label on it, and it says Diet Coke, but when you start to drink that Diet Coke it’s actually Sprite, you’re going to be confused,” said Rhule. “When you show up and you see a football team and you see their name on the schedule or when they see your football team or your position and they see your name on the table, what do they say? Brand is when image, how people see you, meets identity, what you really are.” Creating this brand requires the compilation of many characteristics shaped by culture.

One of the greatest characteristics of football players is their undeniable determination to portray toughness. Coach Rhule defined toughness as the physical and mental strength to accomplish the things that are supposed to be accomplished, no matter the situation.

Matt Rhule was a walk-on athlete at Penn State, delivered 200 resumés no one would accept, and got fired as the offensive coordinator at Temple University. Two years later he became the head coach of a struggling Temple team, which he turned around. He then took on a troubled Baylor program, which he also turned around. Now, Rhule looks to rebuild the Carolina Panthers organization. This story demonstrates his own determination and toughness to persevere.

At Baylor, Rhule created a competitive culture that was infiltrated with toughness and hard work for both players and coaches alike. Watching and studying extra film was not mandatory for Rhule’s players. According to Rhule, it’s not hard work if it’s mandatory.

“It’s a culture, a mindset of doing extra,” said Rhule. “And how do you build that culture and mindset? You have a coaching staff who does extra.”

Rhule also discussed the significant role of leaders stating that the players will follow the brand that the coaching staff puts forward.

“We understand that talent wins games, but you need leaders to win a championship,” said Rhule.

Rhule and the other coaches at Baylor developed this culture of leadership. These coaches also created standards of performance and preparation to win by sitting down and writing out a plan to win at the beginning of each season.

At the conclusion of his speech, Rhule told young aspiring head coaches that their role was to make sure that everyone has what they need to be successful. He then listed 10 tips for young coaches:

Being A Part Of Something Far Greater

Rhule also stated the importance of the annual AFCA convention not only for young coaches, but even for those who have been in the profession for decades. He said that his attendance at the convention, an event he holds dearly, had to be guaranteed prior to his acceptance of Carolina’s offer to become their next Head Coach.

RELATED ARTICLE: Power Of Influence: Tony DeMatteo And His Decades Of Perspective

“The only thing that was non-negotiable was that I wanted to make sure I was here,” said Rhule.

He also called the opportunity to speak at the convention an honor above all honors, as he offered up praise for what the AFCA has done for his coaching career.

“As I sit here 20 years later, I am so grateful for this convention and the AFCA, and the way it brings people together because if not for being here (at the convention), I would have not had that first opportunity, that first shot,” said Rhule.

To watch Coach Rhule’s General Session speech, along with numerous other videos, please log in to your AFCA membership account and search through the AFCA Educational Library.