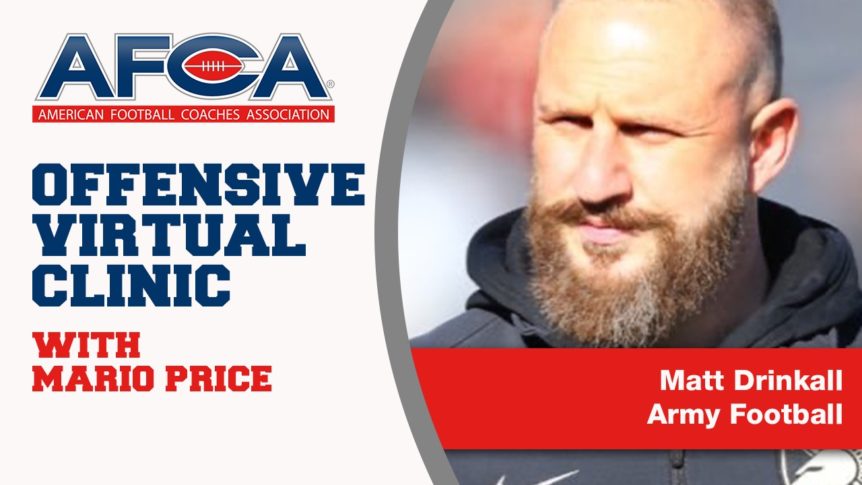 In this AFCA Virtual Clinic, Army football coach Matt Drinkall shares his reasons behind gap series. It is comprised of a four-play run series that is extremely useful and versatile to fit into any offense. The four plays that make up the series are Power, Counter, Counter-Trey, and Tackle Wrap. Coach Drinkall’s methods of run blocking are easily understood to help blockers know the timing and responsibility of their blocks, which helps maintain the flow. Even the ball carrier can pick up on the concepts, so they have the knowledge of where the ball should go because the blocking has a chain of events. The components of the gap series are as follows:

Coach Drinkall has basic rules for his blockers and he calls them the 3 OL Commandments which are:

Simplify How You Teach Blocking… Because It’s HARD

He believes that one of the hardest things to do in the game is block. It is not about blocking and holding a defense, but the timing and being able to get in the way of the defense just enough to set up the key blocks to get the ball carrier to the next level. Drinkall emphasizes simplicity and that is a reason for how his players grasp his concepts and understand who is responsible for which block and where that person should go. Instead of teaching his athletes fronts of different defenses, he teaches them zones, like the A or B zone, that shows where the block is working towards vertically.

He even shares his beliefs about line calls made at the line of scrimmage and why keeping it simple helps your offense. The concepts are made to counter multiple defensive fronts and to deal with shifts, pre and post-snap, eliminating the need for calls. This keeps the tempo of your offense at the pace you want while keeping the defense on their toes without the ability to decipher where the play is going. Blocking to Coach Drinkall is like a domino effect with a chain of events that flow together to create the lane for the ball carrier, and incorporates this sequence:

In the visual demonstrations of the gap series, Coach Drinkall uses diagrams for the four different run plays that show the wham-wrap-ball in multiple fronts. They show the blocking assignment for every person on the field and allow the personnel to be aware of not just where they are going, but where the whole play is going. There is also a good amount of game film displayed in the clinic that shows the Power, Counter, Counter-trey, and Tackle wrap plays against different fronts. Coach Drinkall shows the good and bad examples of the wham-wrap-ball series. That is a testament to the run timing and flow of a run play to get the blocks necessary. Here are the wham and wrap blocks and why they are essential to getting that solid run play.

The Wham Block Is The Key To Success

The wham block is the flow setter and is first in the sequence, so it is of high importance. The requirements of a wham block are first, the block needs to occur at the line of scrimmage to be the locator for the wrap. Along with the three commandments the wham blocker needs to stay and keep his head inside his block assignment to not allow the defender to cut through. Lastly, there needs to be a vertical push to create the crease for the wrap block and later the ball carrier.

The wrap block is second in the chain of events that keeps the wham block true whether the wrap is going outside or inside the wham. The main point that Coach Drinkall emphasizes about the wrap block is that they must take off from the correct platform which is about a step behind them before they pull or move in the direction they must go. Another rule of thumb for wrap blocks is the wrap blocker should make contact with the shoulder in the direction that they are going. Coach Drinkall displayed multiple plays of game film that show variations of the wham-wrap-ball sequence and makes known that this is a concept that can be used at all levels to involve deception and misdirection. Check out the entire clinic for insight on solid gap series technique.

Don’t forget to check out other content in the AFCA educational library. This content includes anything from drills and coaching tactics to convention sessions and podcasts that can help you and your football program.