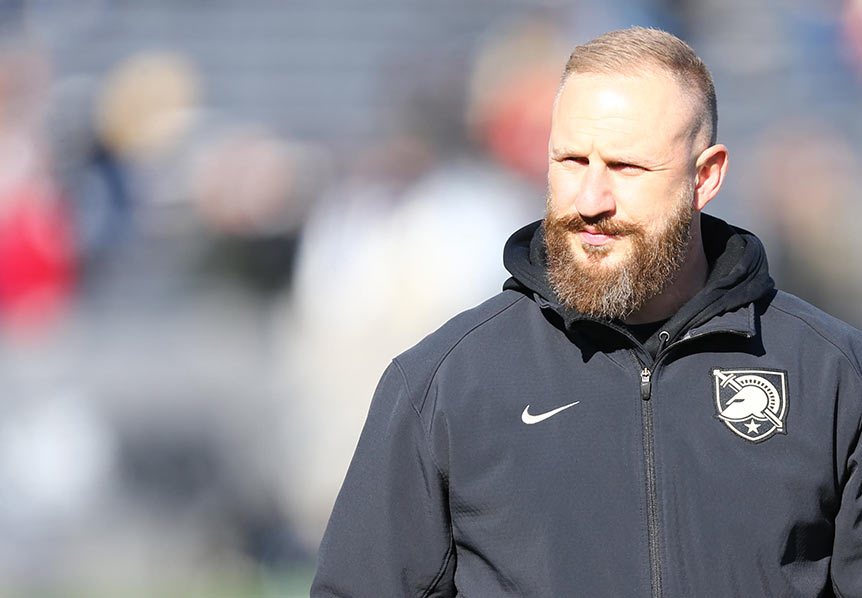 Matt Drinkall, the tight ends coach for the United States Military Academy, uses every tool possible to connect with players and fans. While some coaches shy away from social media, Drinkall’s Twitter is a must‐follow feed. Much like everything else in his professional and personal life, there is a balance to his postings.

One day there is a video of two world‐class table tennis players battling with Drinkall’s tagline of “Me arguing with myself about the advantages of Pistol vs. Offset Gun,” then another is a look inward as he shares several things he finds easier to say but harder to do, such as enjoying time alone, getting rid of noise and defining one’s own happiness.

He’s posted Halloween pictures of him as The Dude From The Big Lebowski. He’s posted a Christian Okoye appreciation video. He’s even been known to use the hashtag #MakeFullbacksGreatAgain. Then, if you keep scrolling, there’s a tweet about hugging and reaching out to your parents. There’s that balance again.

So it’s no surprise that when Drinkall reflects on what is the most difficult part of being a coach, he mentions the need to find balance.

“Coaching is like football itself; it’s incredibly important and rewarding, but it shouldn’t be your life — it should be a part of your life,” Drinkall says. “In any high‐stakes job, it is easy to think ‘more’ is always better. Finding a balance of time, emotion and interests, between your personal and professional life, is critical. You need both.”

As Drinkall continues his quest toward achieving better balance, he’s done so by successfully climbing the coaching ladder. He’s served as an assistant coach at his alma maters, both high school (Bettendorf High in Iowa) and college (Western Illinois, where he received his masters of science in recreation administration). Drinkall then moved on to St. Ambrose University (Davenport, Iowa) for six years before landing his first head coaching job at Kansas Wesleyan.

The first year in Salina, Kan., was a tough one with a 2‐9 campaign. Drinkall, however, righted the ship and posted a 40‐8 mark through the next four seasons before accepting the job at Army in 2019. Being a part of a struggling, then winning, program allowed Drinkall to experience the depths of coaching. “Seeing growth in people you lead is the most rewarding experience overall. That might come in the form of accomplishments, overcoming obstacles and adversity, emotional development, or maturity in general,” Drinkall explains. “Using growth as a metric is the best tool because it is evolving and never‐ending. It allows me to stay in touch with players and coaches throughout the course of our lives.”

Keeping in touch now, as the uncertainty of COVID‐19 continues to dominate the landscape, is as important as ever. Drinkall, who describes himself as a “glass‐half‐full person,” is extracting a bit of positive in an otherwise challenging situation for football programs and the country as a whole.

“COVID‐19 produced this opportunity to frame how football fits as a piece of the puzzle in everyday life. It is clear that football plays an incredibly important role in the lives of people and American culture in general,” he says. “The virus and surrounding circumstances have allowed people to connect more frequently and in new ways — a whole new shared experience that strengthens bonds and relationships.”

Beyond the wins and losses, it’s those bonds and relationships that will keep Drinkall in this game for many years to come. There aren’t too many other professions in which you experience what it’s like to lead young people in such a unique setting.

“Football teams represent the best society can be. They are incredibly diverse, in nearly every area that divides people, and yet, they work and depend on one another effectively and efficiently,” Drinkall concludes. “I love competing, but the ability to impact people and their lives so they can contribute to the greater good, is the greatest motivating factor as to why I coach.”