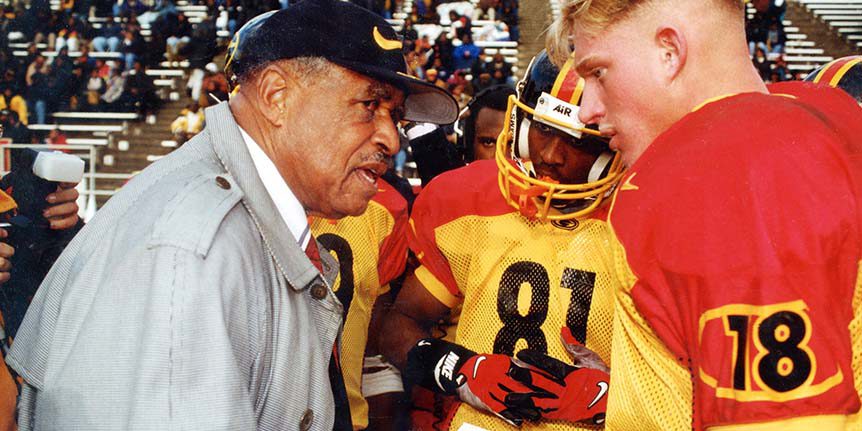 The Grambling College version of the Pro 4-3 defense is the result of information received from many persons.

We are indebted to many college coaches, professional football coaches, players and scouts who shared their knowledge of this defense with us.

The basic ideas of defense have remained constant. A sound defense is one that has every player on the defense carrying out his assignment to accomplish the basic theory of defensive football, that of containing the offensive team and preventing the easy touchdown.

The major objectives of the defense are:

Some years ago we were experiencing difficulty in employing a defense to successfully accomplish the major objective listed above. The problems grew out of the kinds of sets and personnel we were facing each Saturday.

We turn to the Pro 4-3 defense as a matter of survival. We thought that this defense, with its flexibility, would enable us to compete on a more equal basis. This defense is so designed as to match speed with speed, apply pressure on the passer through the use of available LBs and the work of the front four. At the same time you may employ from 3 to 7 defenders against the forward pass.

We name the offensive formations and familiarize ourselves with each. Our defensive captain makes the call of the opponent’s set when they come to the line of scrimmage or after the shift if the team employs one. When the call is made every team member must be aware of the possible things the team can do to his side or plays that might come directly at him.

The backs should immediately be aware of what kind of passes he can expect to be thrown at him, such as a combination of individual patterns.

When we have completely mastered the bread and butter runs and passes from the offensive set, we feel that we are capable of defensing that formation. Diagram 1 shows the Black set. The basic runs and passes are listed. Diagram 2 – Double Wing. If flankers are tight the call is “Double Wing Tight.” Diagram 3 – Red Left. If the call is Red Left, it means the formation is strong to our left. We declare the side of the flanker as the strong side. If the fullback lines up on the weak side of a Red Left, the call becomes Red Left Over. The basic runs and passes are listed under the Red Left Set. Diagram 5 – Brown Left. This is the formation most frequently used against us. It is characterized by the normal full back and set back with flanker wide or close. The weak side end varies from tight to extremely wide. Diagram 6 – Right and Left Tackles. Tackles can use 3 or 4 point stance. Many persons have argued the merits of which hand down, and foot back will provide the best performance. We encourage them to try both methods, right hand and right foot, and left hand and left foot. We try to find out which method provides better results in executing his assignment. That is the one he will use.

They should line head-up on no. 3 man. His normal position should be two feet off ball, but he can vary this depending upon the quickness of his opponent. Should step with inside foot for outside shoulder of no. 3 man, obtain parallel foot position and react to key.

You must rush passer in your lane and as you rush passer and see that you are in the line of flight get your hands up as high as possible without leaving the ground to hinder the quarterback or block the pass. Diagram 7 – Right and Left End. The defensive end should line up face on outside shoulder of no. 2 man in a 3 point stance, as close to man as necessary.

The defensive end will read offense end and tackles block – destroy block jam tackle to prevent his progress down field as a blocker. If the ball starts in the opposite direction, you are the chase man. You must get across the line of scrimmage and get as deep as the ball before chasing. The end after penetrating deep enough should turn and chase as fast as possible.

He is responsible for keeping leverage on the passer when the rush is on and is the contain person for reverses and bootlegs.

The coach must improvise drills that will help the defensive end recognize keys and react to them. For example, he must fight for outside position if the tackle tries to hook him, jam him to the inside when he (tackle) blocks out on him, and if the tackle blocks in react to outside pressure if no outside pressure, move down the line to close hole to inside. The persons most likely to block you will be center in a ross block, near half back or pulling guard.

If the tackle pulls, you pull along the line laterally with him (watch for false flip) wide plays should be forced from inside out. If tackle pass blocks, destroy block and rush passer from outside. Diagram 8 – Right & Left Line Backers. We want linebackers in a 2-point stance, feet parallel or outside foot back, hands low in a football position. His face should be on outside shoulder of no. 1 man, as close as possible to the line of scrimmage.

The outside linebacker should step with inside foot to jam off tackle hole using hands to destroy end’s block. He should prevent end’s progress down field as a blocker or receiver. He should never be hooked by end.

The outside line backer’s responsibilities are similar to those of the defensive end. When the man in front of you tries to hook you, fight for the outside position – never be hooked. When the man blocks out on you, jam him to the inside.

He must be able to react to the end’s block. If the end blocks down, step with inside foot and shrink 1 and 2 hole, but do not cross line of scrimmage while keying near HB–no. HB, look for guard block.

His first responsibility is the off-tackle hole. If sweep shows, force it deep then take proper pursuit angle. Coach must have standard adjustments for end splits and flankers. A faulty alignment or improper adjustments to split ends and flankers can lead to quick touchdowns. Diagram 9 shows the position for a weak line backer: In case of a close set flanker, who is playing one yard or less outside of his end, the SLB has basic responsibilities.

If flanker is 2 to 5 yards wide, SLB must be conscious of flanker cracking back on him. Basic responsibilities:

If flanker is more than 5 yards wide, SLB has basic responsibilities.

When flanker is midway between end and tackle in a slot, the SLB should line up headup or inside of slot man, depending on width of slot man and defensive call, LB must check slot man if possible than handle basic responsibilities. We want MLB in a 2-point stance, feet parallel, hands low in front of him ready to play football. Hs position should be headup with center – 1 ½ to 2 yards of line between defensive tackle.

MLB is responsible for area between defensive tackles. He must read blocks of enter and guard and react immediately.

If center comes at him, he must destroy his block and react to the ball carrier.

If center cross blocks, be ready to fill hole and react to ball carrier.

If pass shows you have draw responsibility, first – do not leave immediate area until QB has retreated beyond any possible draw man.

Strong Corner Back (SCB): Check backfield flow through the offensive end. If action starts your way and OE blocks, you must force end run. If flow starts your way and end releases you, must check to see if HB blocks or releases. If HB blocks the SCB, continue force – HB releases SCB, drops back into pass zone. When the flow goes away SCB should drop straight back checking for any receiver coming in flat. He must take proper pursuit angle.

Weak Corner Back: Should key backfield action through offensive end. If flow is toward WCB play for pass first. (LB will force) and then support end run. If flow is away, start roll (predetermined) looking for receiver coming back into your zone.

Weak Line Backer: Must read backfield flow through offensive end. (Automatic force) If the end blocks down or on WLB he must cross line of scrimmage, force end run inside of him. If the action is away, retreat to hook zone looking for play coming back or receivers going into your zone.

Middle Linebacker – Key FB: Move to hook area on side of FB lock or flow. This article was written while Coach Robinson was at Grambling State and first published in the 1968 AFCA Proceedings Manual.

Eddie Robinson coached the second most victories in NCAA Division I history and the third most overall in college football. For 56 years, from 1941 to 1942 and again from 1945 to 1997, he was the head coach at Grambling State University, a historically black university (HBCU) in Grambling, Louisiana. Robinson is recognized by many college football experts as one of the greatest coaches in history. During a period in college football history when black players were not allowed to play for southern college programs, Robinson built Grambling State into a “small” college football powerhouse. More than 200 of his players went on to play in the American Football League, CFL, and NFL. Robinson coached three American Football League players who would later be inducted to the Pro Football Hall of Fame. During his coaching career, Robinson compiled 45 winning seasons, including winning or sharing 17 Southwestern Athletic Conference championships and nine black college football national championships. He retired in 1997 with a college head coaching record of 408-165-15. Robinson served as the 1976 AFCA president. He received several awards during his career including the Amos Alonzo Stagg award (1982) and the Bobby Dodd Coach of the Year award (1992). He was inducted into the College Football Hall of Fame in 1997. Robinson passed away on April 3, 2007.