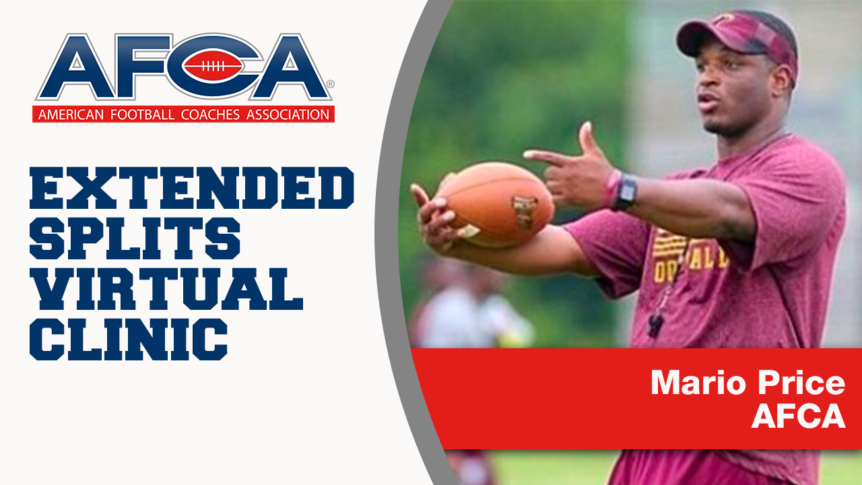 In this Virtual Clinic Session, Mario Price, the Director of Coaching Education at the AFCA, presented on extended splits for wide receivers. He highlights the importance of utilizing the entire width of the football field, which forces the defense to cover more territory and potentially creates mismatches.

Coach Price began his coaching career at Waco High School (TX) before moving to Texas A&M University-Commerce. He has also coached at Millsaps College, the University of Louisiana-Monroe, and Davidson College. While coaching at ULM, Coach Price and the Warhawk coaching staff implemented the concept of extended splits. Some of the benefits of using extended splits include:

Utilizing extended splits also creates a tremendous advantage in the run game. Extended splits allow for an advantage in the numbers game. This creates an opportunity to have a hat for hat. For example, if you have four defensive players lined up over a three by one, and you have two defensive guys over one guy to the boundary, then you should have a clean five-man box.

If the numbers don’t exactly work out like that then you always try to find the one-on-one hat for a hat matchup. Coach Price also shares how it becomes difficult for the +1 defensive players (apex backers and safeties) to cover the passing threat AND run game. This leads to poor alignment, which creates poor angles and more sprinting for defensive players. It also opens up the inside run opportunities, if set up correctly.

While running the screen game it is important to have certain tags for different WR screens. Then they must execute the designed screen by catching and accelerating from the launch point, which is located behind the numbers and behind the line of scrimmage. Coach Price discusses the importance of protecting the launch point and how a “cross-block” helps in doing so.

While discussing execution in the passing game, Coach Price points out the creativity that simple addendums allow for when lined up in a three by one formation. The tagged wide receiver runs whatever additional route he is tagged with while the remaining wide receivers stay on their route structure. It is also important to note that there can be leniency with route technique, especially if you use landmarks. These landmarks allow for the flexibility in alignment and route structure. Another advantage to extended splits is the capability of mixing in dummy routes to draw the safeties away from the middle of the field. This exposes the middle of the field between the hash marks and allows for some big-play opportunities.

RELATED ARTICLE: The Top 2 DB Drills You Can Do In 10 Minutes Or Less

Q: What coverages seem the most effective in guarding the extended splits?

A: This is tough because whenever there is a coverage that would defend the extended splits then the box should be clean enough to run the football. But I would say anytime we get multiple guys pressed and the number 2 receiver is covered in a three by one set then that could really disrupt our route structures.

Q: How often did defenses use trap corners?

A: We saw that a lot.  A lot of times you would see the corners playing over the number 2 receiver because they weren’t too concerned about us throwing the fade route consistently. If we had majored in extended splits, we definitely would have exploited that a lot more and thrown the deep ball.

To watch Coach Price’s Virtual Clinic, along with numerous other videos, please log in to your AFCA membership account and search through the AFCA Educational Library.