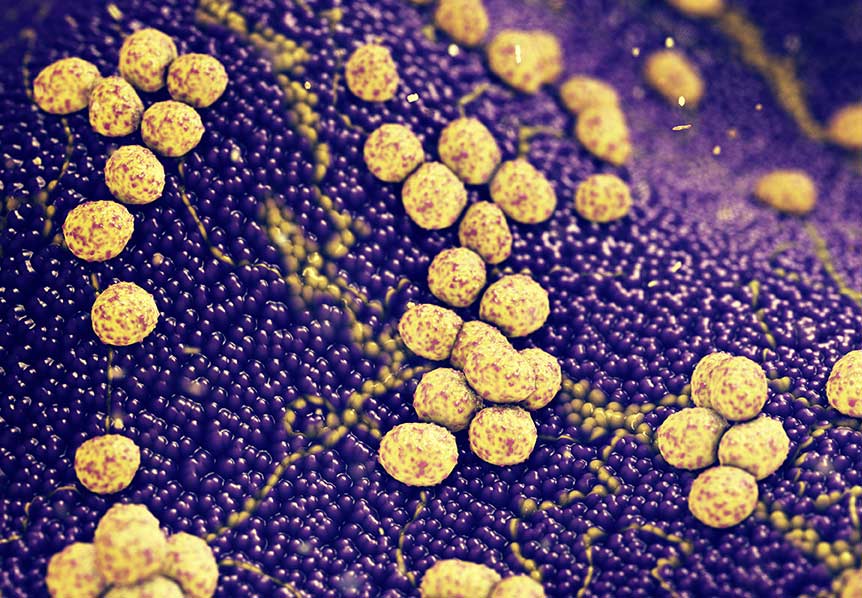 A recent concern for many athletic departments, sports facility administrators, and other recreational employees in charge of locker room, weight room, and shower facilities is the rise in a contagious form of bacteria known as MRSA (Methicillian-Resistant Staphylococcus Aureus). Pronounced “mer-sa”, this condition was first discovered in 1968 and initially reported in an athletic environment in 1998. It has since become widespread across the nation at every level of competition from junior high to high school to collegiate, and even at the professional level.

MRSA is a topical skin infection that appears red and swollen and typically resembles a pimple or boil. Because it looks much like a spider bite, even the most experienced physician may unknowingly misdiagnose the condition. It may be carried on the skin or even in the nose of otherwise healthy individuals (one in three people carry some type of staff, while two in 100 carry the MRSA strain). Over time, the bacteria have developed a resistance to many of the most commonly used antibiotics such as oxacillin, penicillin, and amoxicillin, due to the sharing of medications and patients not completing the prescribed dosage amounts.

A recent report from the Centers for Disease Control and Prevention indicated the total percentage of reported staph infections involving MRSA has risen from two percent in 1974, to 22 percent in 1994, and finally to 63 percent in 2004. One report also stated that MRSA infects more than 90,000 people nationwide annually, killing at least 20,000 each year. The number of MRSA cases involving athletes has continued to rise as this awareness has been brought to the forefront. Numerous members of collegiate football teams have required days of hospitalization for treatment of MRSA infections contracted through turf burns on their arms and then players sharing locker room towels and practice gear. Fencing club members have contracted the disease through inadequate shower facilities and the sharing of uncleaned sensor wires (used to detect touches by the opponent’s foils).

In 2005, Austin Peay State University’s football and volleyball team lost players off and on for 9 weeks (almost both seasons) due to a MRSA outbreak in the department. The condition was finally brought under control at a cost of over $5,000 and the implementation of stricter standards of athletic hygiene, stronger training room procedures, and the education of all coaches, administrators, athletes, trainers, equipment personnel, and team physicians about the bacteria.

Fairly easy to treat if caught early, MRSA is often misdiagnosed, and often not viewed as a potentially serious threat to athletes and fitness enthusiasts.

MRSA can spread rapidly if proper precautions and safeguards are not in place or followed. Improper diagnosis can lead to hospitalization (sometimes extended), and serious cases may lead to pneumonia and/or blood stream infections and even death. A Nevada female died in January of 2017 after her leg wound rejected treatments of 26 different antibiotics. Most athletic departments establish their MRSA protocols on cues from the Certified Athletic Trainers or trained medical professionals, but the Equipment Manager also needs to become part of the treatment team and be educated on the accepted guidelines for the treatment and prevention of this serious condition.

A MRSA infection is usually transmitted when athletes share items such as towels, equipment, and other personal items that come in contact with a MRSA-infected wound. It may also be contracted through person-to-person contact if one of the individuals has an affected open injury such as a skin abrasion rubbing against another’s open skin wound. Experts have determined the condition may also be carried through the air or be found in dirt and grass surfaces (real or man-made).

Newer turf surfaces are traditionally treated with special agents formulated to kill the bacteria on contact. Neoprene sleeves and similar coverings can be beneficial and effective alternatives to bandages and wraps, and the athletes seem to adopt their use with minimal objection.

The key to heading off a MRSA outbreak is to take proactive and aggressive actions prior to its onset.

Good hygiene is the key to preventing the spread of this contagious disease. Equipment Managers should be authorized to enforce strict hygiene practices in the locker room areas.

Athletes should be required to shower immediately after practices and competitions using warm water and antibacterial soaps. Installing liquid soap dispensers is a sound preventative measure, since bars of soap are commonly shared and offer contamination tendencies. Using individual clean, dry towels must also be a required practice to avoid spreading the bacteria.

Educating the athletes on the importance of these practices will help gain acceptance and increase their understanding that they are vulnerable to a serious health issue.

Maintaining a sanitary environment in the entire athletic facility plays a big role in the prevention and containment of most unwanted outbreaks. This is accomplished by addressing three distinct processes: sterilization, disinfection, and cleaning.

Locker rooms are unable to address most sterilization requirements but can easily address the other two through various methods. Weight room equipment must be wiped off after every use and the entire area should be sprayed down on a regular basis (free weights typically have about 362 times more bacteria than a toilet seat).

Proper sanitation may be accomplished by wiping equipment using a 1:100 solution of diluted bleach (1 tablespoon of bleach in one quart of water). Many companies offer pre-packaged towelettes and small spray bottles specifically designed for this purpose. MRSA bacteria thrive in carpeted areas, so use extreme caution and incorporate the use of available products that inhibit the spread of bacteria on these types of surfaces.

Checking the laundry system to ensure that those systems infuse a chemical that addresses bacterial growth. A simple mixture of any oxygen bleach/hydrogen peroxide with water (1 part per 10 gallons of water) and proper water temperature (150 degrees for cotton/135 degrees for performance fabrics) will kill MRSA. Make sure all items are completely dry prior to use. Education is another integral part of any athletic department’s plan for handling MRSA infections.

Coaches need to understand the necessity to quarantine athletes from practices and competition until all wounds have healed to prevent further contaminations.

Reminding players of the importance of personal hygiene and proper wound care will increase the success of a safe and sanitary locker room environment. It must be emphasized that every team member, not just those infected with the MRSA bacteria, need to take proper precautions so that a single incident does not become an outbreak. Reviewing cleaning practices with coaches, athletes, equipment staff, trainers, and the janitorial staff at regular intervals improves the chances of preventing outbreaks and/or contaminated areas. Make certain designated cleaners and chemicals are used in the recommended concentrations and according to the instructed procedure. Increasing the strength of such products may cause serious irritations, burns, or abrasions which could lead to the spreading of the MRSA virus instead of inhibiting its growth.

This article was written by Sam Trusner, E.M.C. Trusner currently serves as the National Office Manager for the Athletic Equipment Managers Association. Sam has been a member of the AEMA for 30 years and has served numerous positions in the organization including District 5 Director, Certification Chair, and Editor of the AEMA Journal. He served on the original Certification Steering Committee and was responsible for acquiring ADAMS, USA as the sponsor for the Journal, allowing members to receive their copies at no charge. Sam was the Head Equipment Manager at Millikin University for 20 years, an assistant at the University of Illinois for 10 years, and an instructor of Sports Management at Millikin after receiving his Master’s degree from the University of Illinois in 2000.