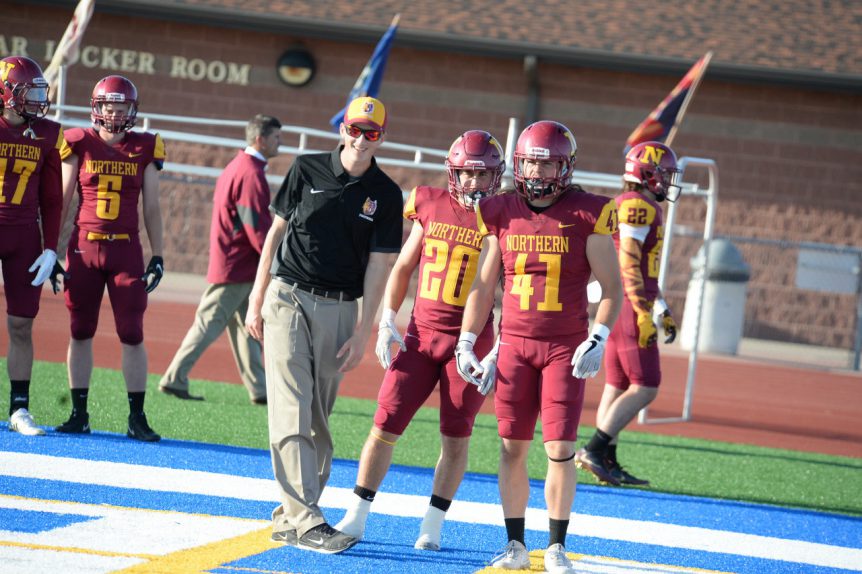 Entering my fifth season with the Wolves Defense, second as Defensive Coordinator, I am excited to talk with you about something that has become an obsession with my Cornerbacks Coach, Jared Gallatin, and I…Man Coverage!  With the way Football is today, having to play Man Coverage is inevitable.  At some point during a game, one of your Defensive Backs will be one-on-one with a receiver downfield.  As a coach, you will need to accept it and embrace it.  At Northern State, we employ a 3-4 Defensive scheme basing out of a Cover 4 two high Safety shell.  This Defensive structure allows us to hide not only what coverage we may be in on a given down (We play a multitude of Coverages: Cover 4, Cover 1, Cover 2, Match, Cover 0), but this also allows us to hide who will potentially be our fourth, fifth, or sixth rusher.  Within all of our Defensive schemes and coverages, we have the ability to allow our Defensive Backs, especially our Cornerbacks, to play man coverage concepts.  At its base level, man coverage is played in two ways, in a 1) Press position or in a 2) Off position.

When playing off-man, the first thing that needs to be established is the yardage at which you play your Defensive Backs.  I play my Cornerbacks at 7 yards from the Line of Scrimmage and my Safeties if in a man concept, will stem to 8 yards from the Line of Scrimmage.  Making this black and white in the players’ minds is key to your success.  Every Coach in history has had a player align too tight to the Line of Scrimmage and get blown by on a vertical route, or align way too deep and give up countless yards on hitch routes.  Eliminating these pre-snap alignment errors will help immensely once the ball is in play and will give your Defensive Backs the best opportunity to be in the right position to make a play.  In no way am I saying that the depth I use for my athletes is what you should use for yours, this is something that needs to be assessed by the coaching staff and agreed upon.  Factors that may play into this yardage depth definition are age, quickness, top-end speed, game experience, and Football IQ. The next piece to the man coverage puzzle is the Defensive Backs feet, eyes, and initial steps.  Our Cornerbacks will always have their outside foot up in a staggered stance.  When you break down the Defensive Back stance to the bare bones, you are looking for a few things.  The feet need to be pointed forward or slightly pigeon-toed in a toe to in step (minimum) or toe to heel range (maximum) and under the athlete’s armpits.  There should be a bend in the knee, bend in the hips and the shoulders down over the knees.  The arms should be relaxed but ready to engage and the chin should be up.  Our eyes will always be on the leverage hip of the wide receiver we are keying (Outside leverage = Outside Hip / Inside Leverage = Inside Hip).  I am not a believer in reading the Quarterback through 3 steps.  I believe that it slows down Defensive Backs, especially young untrained ones.  It creates bad habits within your Defensive schemes where the QB may not be where their eyes initially need to be.  The quarterback is like Medusa, he will turn you to stone, and stone Defensive Backs have a hard time covering receivers.  The number one man beater isn’t a route combination, it’s a Defensive Back’s eye discipline and progression.

Once our eyes are in the correct location, Defensive Backs need to be trained constantly on what they are looking for.  We are looking for the initial release and potential stems of the wide receiver off of the Line of Scrimmage.  With my Defensive Backs, we look at 4 possible vertical release types.  1) Outside release, 2) Vertical Release, 3) Slow Inside Release and 4) Drastic Inside Release. With a Drastic Inside Release, the receiver is looking to take away your inside leverage and then immediately press vertically.  If the initial inside leverage is taken away, your Defensive Backs are susceptible to inside breaking routes.  In my experience, 9 times out of 10, if a receiver immediately stems inside off the ball, he is running an in-stemming route.  When the stem is recognized, our Defensive Backs will Steer (a lateral foot-replace) or Weave (a lateral step-behind) to maintain initial inside leverage and then progress back to a backpedal.

With a Slow Inside release, I tell our Defensive Backs to continue vertically in their pedal.  This is a typical Fade Route stem with a Cornerback in inside leverage.  This stem is slow and not drastic.  The wide receiver is trying to manipulate you into working farther inside so he can then fade out towards the sideline and create more space for the ball to be dropped in.

Outside Release = Tilt butt/Angle to sideline and Pedal

With an Outside Release, we have our Defensive Backs Tilt or Angle their bodies towards the sideline and pedal, keeping their eyes on their leverage hip.  This technique will help your Defensive Backs cut off a Must Outside Release (MOR) vertical route without opening the hips immediately.  This will also help if the route breaks back inside off the initial inside release.  The hips will not be committed to the sideline and have to break back the opposite direction.

Press-man is a technique that all Defensive Backs need to develop, and every position within the Defensive Backfield will use it at some point.  I don’t usually press my safeties in the open field, but if we are playing Man Coverage in the Red Zone, being able to have your Safeties press is a great tool.  Press-man is an art form, and it continually needs to be refined and altered to master this technique.  The biggest advantage of Press-man is that you get to attach to a wide receiver early in his route progression.  Wide receivers love space, and Press technique takes this away from them.  When attaching to a wide receiver early in the progression, you have the opportunity to affect not only the timing of the route but also the depth or location at which that route is run.  When used correctly, this can be detrimental to an offensive passing game.  The Press-man stance is different than the Off-man stance.  We will be square, with our feet no wider than shoulder width apart, feet pointed straight ahead.  The knees are bent, shoulders are wide and down, the chin is up.  The weight in on our toes and our hands are above or near our waist, ready to fire.  Our alignment will be 1 to 1 ½ yards off the wide receiver with the Defensive Back matching his outside foot to the wide receiver’s inside foot (May be opposite depending on wide receiver split and ball location – Split Rule).  The more explosive off the ball the wide receiver is, the more room you will need to give yourself.  (See Diagram 4)  When it comes to the techniques used after the stance is perfected, we use two variations of Press-man Coverage: 1) Motor and Mirror, 2) Step and Shock. These techniques can be broken down into two separate parts, the Start and the Transition. I would like to thank you for taking the time to read this article. There is no secret dust or potion that will magically make your Defensive Backs great in Man Coverage.  Success lies in the compelling motivation to continue to perfect your craft and the persistent preoccupation to not only be successful but excited to play Man Coverage.  In other words, it takes an Obsession.  Obsess to become the best you can, or be Depressed because you didn’t buy in and give it your all.  Coaches need to strive to keep things simple, and keeping things simple is more complicated than one may believe.  The more your athletes buy into your ideas, techniques, and schemes, the faster and more aggressive they will play.

“You have to understand the mundanities of excellence…excellence is boring, it’s doing the same things over and over and over again that have led you to success.” – Sundance Wicks, Head Men’s Basketball Coach, Missouri Western State University.

Feel free to reach out regarding the article.  Go Wolves!

Matt Racowschi stepped away from coaching following his third season with the Wolves in 2018 and his second as defensive coordinator. In 2017, Racowaschi led the Northern State defense in his first season as coordinator. The Wolves finished the year ranked third NSIC in opponent third-down conversions, behind Minnesota Duluth and NSIC Champions Minnesota State. As a graduate assistant for the Wolves, Racowschi worked primarily as the safeties coach beginning in 2014. The San Pedro, California native, opened his collegiate career at Santa Barnara City College in California. Racowschi is no stranger to NSU football, as a former student-athlete for the Wolves at defensive back. He played two seasons with Northern State and graduated in May of 2013 with a Bachelor of Science in Human Performance and Fitness.