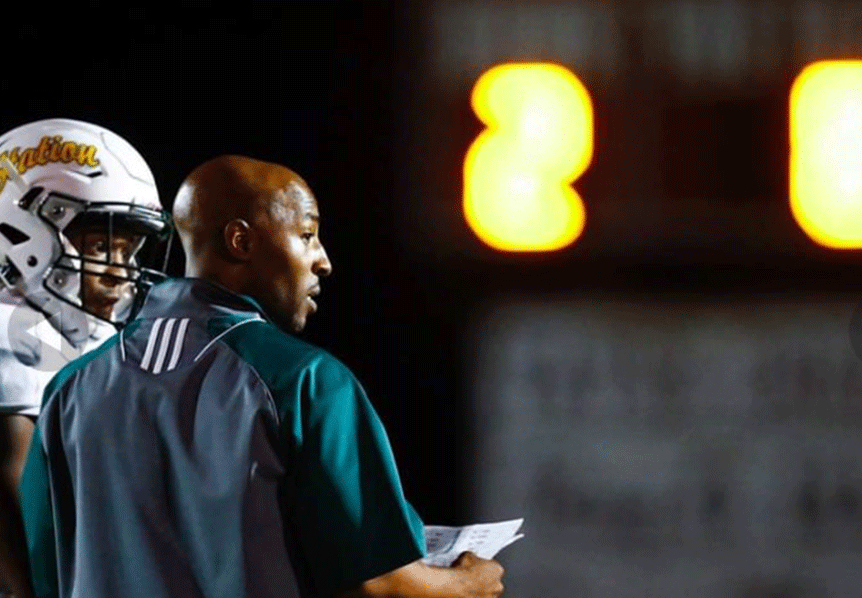 Offensively, the game of football has changed from three yards and a cloud of dust to a fast pace wide open style. As offenses continue to evolve and find new ways to create mismatches via RPOs, motions or pace of play, defensive coordinators are constantly looking for ways to be sound in alignment and assignment, while offenses are running plays at a rapid pace. This pace puts a premium on the ability to communicate coverage calls and adjustments effectively and efficiently between all defensive participants. With the way the game is being played today, I determined our defense would be better served if our secondary was responsible for many of the calls and adjustments. We became more effective and efficient with our communication which resulted in our guys playing faster. There are several things that made this strategy effective.

I have always been a big fan of the two-deep look because of the flexibility it provided in our defense. In my opinion, it was always a lot easier to adjust to different offensive sets by playing multiple coverages while lining up in a two-deep look. In the first three days of our install period, we would put in our base coverages for a 2×2 and a 3×1 look. Most of the teams that we were playing at the time were spread teams with these two formations being their (as well as our) main sets. The third most common set at the time was twenty personnel.

The first coverage we installed was our Read Cover 2 that we ran against 2×2 sets. We called most of our coverages by colors, so anytime our opponent came out in a 2×2 our players would communicate the proper color for this coverage. In our ‘Read 2’ we read 2 to 1 and match routes with our secondary; our linebackers also read 2 to 1 as they drop into coverage. Next, we would put in our cloud coverage to 3×1 (trips). We kept a two-deep look, but we would adjust the backside safety’s alignment over the ball. We would allow some of our safeties to roll on the snap based on ability. This was one of the few coverages we did not identify by a color.

In our cloud coverage, the corner to the trips side played the flats (still reading 2 to 1). The safety to the trips would play hash to sideline, and the safety away from trips played the middle of the field. The safety away from trips would read 3 to 2. The corner on the backside would be locked up one on one. Outside linebackers would read 2 to 1 and inside linebackers would read 3 to 2 as they were getting into their zone drops. If the running back was opposite of the trips, then the outside linebacker would be responsible for running with the back.

For an empty set we would play quarter, quarter, half, which was our version of cover 6. This would be the last of the automatic coverage calls we installed defensively. In our cover 6 we played cover 4 to the trips and ‘Read 2’ to side with two receivers. The field corner and safety would play deep one fourth with the outside linebacker playing flats. On the two-receiver side our corner and safety play our ‘Read 2.’ The outside linebacker on the two- receiver side is reading 2 to 1 as he gets into his drop.

As a defensive coordinator my main objective, just like any other defensive coordinator across the nation, was to take away what our opponent’s offense did best. So, as we started to game plan, we would break down film and identify our opponent’s top plays. As the defensive staff formulated the game plan, one of our goals was to limit the amount of checks and adjustments made by our box players. Now, we all play those teams where it’s inevitable that you are required to have several different adjustments so you can be sound defensively. In these situations, with our front we would try to make as many adjustments possible with movements that happen post snap versus pre-snap. It allowed our guys up front to think less and play faster. The key was to make sure our guys in the box were not outnumbered in any situation since they did not focus on a lot of pre-snap moving or adjusting.

When it comes to schemes and play calling, it is a numbers game. It is imperative to make sure you are not at a disadvantage due to numbers. Our answer to staying sound number-wise was to adjust with our secondary. Using a two deep look made it easier for all stakeholders involved in preparing and executing the game plan.

Since the secondary was used to balance our numbers, formation recognition was vital for proper alignment. At times, we would walk one of our safeties down to give us an extra man in the box to help stop the run. We do this to be sound versus a RPO or for leverage. Then, there would be times we would roll our safeties, depending on flow, to allow us an extra hat and create a number advantage. In our secondary, the safeties made most of the calls and necessary adjustments, but there were times we asked our corners to make them. It could be due to an unbalanced set, certain tight end formations, or the use of the corner blitz. Corners were also required to relay the formation and coverage.

With the variety of motions presented by multiple styles of offenses, our philosophy of adjusting with our secondary and playing coverages based on formations allowed us to check in and out of coverages without a lot of confusion. There was a big emphasis on communication because it was imperative that the secondary and linebackers knew the formation and coverage when the offense lined up and sent someone go in motion. By being intentional about communicating, we allowed the secondary to take ownership in how the coverage checks would be communicated. So, they came up with hand signals that would relay the coverages to each other before and after any type motion.

Handling the different types of motions we would see wasn’t a big issue for us because of the rules we had in place. First, we establish what motion constituted a coverage change. We would not check into a new coverage until the motion man passed the quarterback. Most of the time the coverage we played was based on formations, and our players knew that we would check in and out of coverages based on the formation. The motion presented to us would change our coverage accordingly. For example, if the offense comes out in a 2×2 look, then motions to trips, we would check our coverage to cloud. We would also have special checks depending on our opponent and personnel issues.

Defensive pre-practice periods required a lot of formation and motion recognition and walk-throughs, so we could  check into the correct coverages and alignment. Yes, the base coverages would be used more often than not but there were plenty of times different coverages or adjustments had to be used, due to match-up issues, to put the players in a better position to succeed.

The key to any good defense is to make sure it fits your personnel’s strength. It does not matter how great or sound your scheme is on paper if your players cannot execute it at a high level. So, making any adjustments or checks with the secondary is pointless if the personnel lacks the mental or physical ability to perform what is asked of them. With the secondary making the calls and adjustments, usually the safeties, you must have at least one guy, though preferably several, on the field with a high football IQ and good communication skills. These guys are responsible for getting the defense lined up correctly in the right coverage.

Alignment and assignments are two terms you constantly hear on the football field, regardless of schemes. The in-game coaching luxury is the limited calls coming from the sideline. Since the secondary makes the calls on the field, aside from blitzes and stunts, there are fewer calls being signaled in from the sideline, which allows for faster play. This does come with a great deal of intentional preparation during staff meetings, board work, and practice time. It’s tough to play sound football when you can’t get lined up correctly, so those walk-throughs are a vital part of the process. There is no playing fast if there is not a clear understanding of the plan.

Regardless of what schemes you prefer or what adjustments you think are best, we must keep mind that if our players cannot execute it effectively it does not matter. Certain programs can do certain things because of the personnel they consistently have in their program. It becomes difficult at times to transition away from what we prefer, especially if it has been successful schematically. However, when it becomes time to make decisions about adjustments and checks, keep in mind your personnel’s strengths and weaknesses and go from there.

Frank Parks, Jr. was hired in 2001 by East Jessamine High School (KY) as the defensive backs and wide receivers coach, a position he held for 2 years.

In August of 2003, Parks was hired as an assistant coach at Madison Central High (KY). Parks served as a varsity assistant for seven seasons working with the wide receivers, defensive backs, and serving as the special team’s coordinator. He also was in charge of implementing and designing the program’s strength & conditioning program as the strength coach.

In 2010, Parks was hired at Bryan Station High School (KY) as a business teacher and defensive coordinator. In 2012, he was the Head Football Coach, a position he would hold for the next 8 seasons. This would make him one of the longest tenured head coaches in school history. In 2014, Parks was recognized as the KFCA District Coach of the Year.