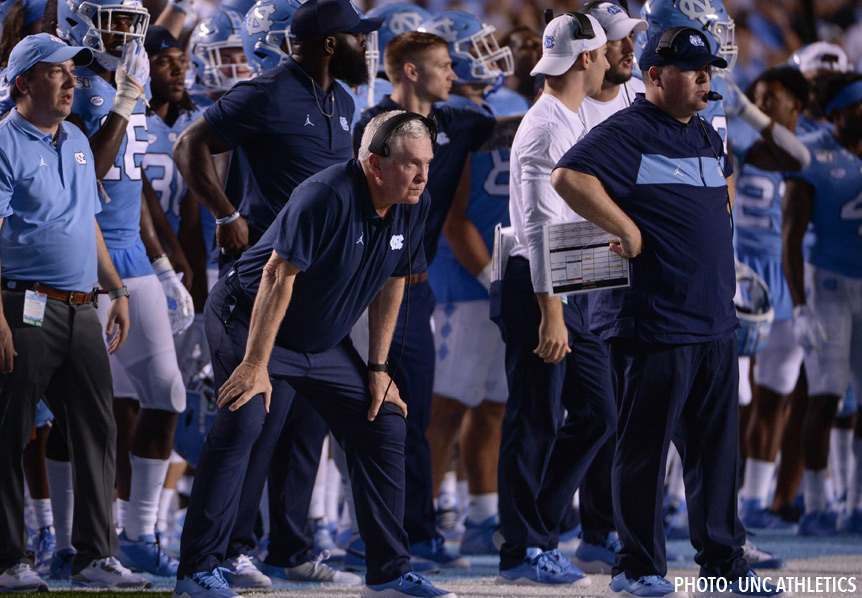 Mack Brown says the notion that someone is tougher than someone else on a football field is a misnomer. If you’re on a football field, you clearly are tough. It’s about being “tougher longer than your opponent.” It’s something he preached during all his years as a head coach to his players … and something he attributes to the profession of coaching as well.

As a head coach, especially in a high-profile environment (such as his 16 years leading the University of Texas or his current head coaching position at the University of North Carolina), you are called upon to be tough for the benefit of players, assistants and the overall program.

“Toughness for a coach is handling that press conference after the game. It’s trying to pick up your team and staff after a tough loss, so you don’t let one loss beat you twice. It is going to speak at a funeral of one of your players who was lost in a car wreck. It is going to see a parent and young man who ruined his knee in his senior year, and he was so excited about leading his team as a senior and the possibility of an NFL career,” Brown remarks. “It’s having to fire a friend, when you are at a point when it is no longer good for the university for him to stay, but you love the guy.”

Brown says he appreciates the profession and those in it even more now. He calls coaching a “lonesome life” because there are so few people around you who understand how much the job truly entails.

Brown knew the rigors of the job before ever leading his first program at Appalachian State in 1983. Brown’s father and grandfather had been football coaches and superintendents of schools in their home state of Tennessee. Brown always had been around athletics and even started coaching a Little League baseball team when he was just a teenager playing on a Babe Ruth squad.

Beyond the rigors, however, Brown also gained early exposure as to the impact and difference a quality coach makes in players’ lives. He says as he grew up, he was around a lot of his grandfather’s ex-players.

“They talked about the influence he had on their lives … by turning them into men and giving them an opportunity to be better prepared for life after high school football,” Brown recalls. “That message carried through with me. When I took that role as head coach, I felt a lot of pressure to make sure it was more than just winning football games. You had to influence young people’s lives.”

Of course, Brown won games — a lot of games — including the 2005 national title. He achieved this greatness on the field by inspiring and leading players from all walks of life. He sees the sport of football as “the best melting pot” in our society.

“Coaches have to care about teaching kids and caring about the whole. They ask the parents to give them their most prized thing in their lives. When you take someone’s child out of their home and commit to take care of them, you don’t think about what color they are,” Brown explains. “You just think they are a young person who you want to help grow.”

It’s why he loves athletics, and football in particular, as he sees it as a way to help the healing needed in our country. He’s troubled that race relations in this country haven’t progressed and hopes athletics can play a role in some much-needed healing. “It’s one of the things I love most about sports – and especially football – is that it brings down a lot of walls and barriers.”