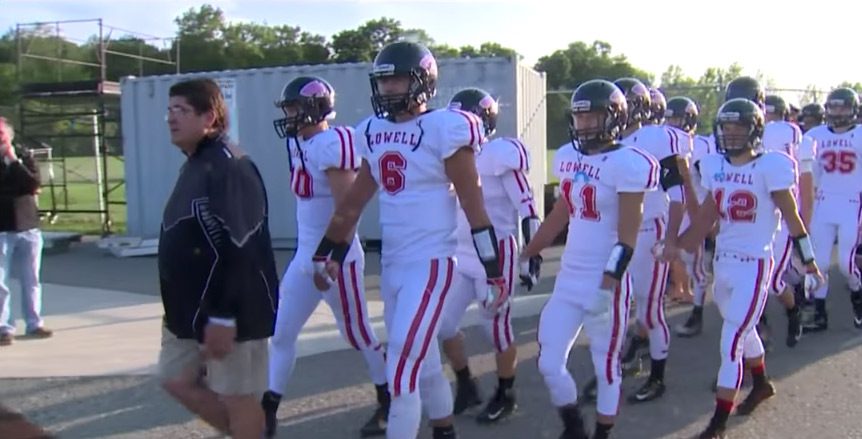 When Noel Dean was a child, he remembers his father sacrificing time after work and even investing his own money to help build a church in their home town. This selfless act of working for the greater good of the community and thinking about life’s bigger picture definitely imprinted on the youngster who would grow up to become one of the nation’s most successful high school football coaches.

Noel Dean, former head football coach at Lowell High School in Lowell, Mich., won the 2011 AFCF Power of Influence Award, an award that has grown in notoriety and is now officially presented by TeamSnap during the general session of the AFCA Convention. Part of the reason for his success is that he not only built a high school football powerhouse in a working-class area of Michigan that had no real tradition of winning football, but he somehow managed to parlay that on-the-field success into a charitable organization that struck a chord with the community and grew almost beyond comprehension.

Dean took over the Lowell program in 1996 at the age of only 27. But even then, the ambitious young head coach had a clear vision and meticulously thought-out formula for how he could turn the non-football school into a perennial winner.

Lacking the raw talent that many of the larger schools had available to them, Dean identified two immediate areas that he could tap into to improve the football team at Lowell:

In Part 1 of our series on Coach Dean, we’ll discuss how he helped grow the love of football within the community of Lowell.

Cultivating A Love Of Football

As a head football coach who was both young and new to the community, Dean felt a need to establish and promote youth football in Lowell. He developed a flag football program for 4- to 7-year-olds to counterbalance the area’s youth soccer movement which was prevalent at the time.

“The entire Lowell school system has about 4,200 students at any given time and we’ve averaged about 800 kids who play football from fourth grade on up,” says Dean. “If you do the math, that’s about 2,100 boys in the entire school district and 800 of them play football within some level of our program.”

Getting to these impressive participation numbers was not an easy task, according to Dean.

“My first few years as coach in Lowell, I’d go down to the elementary and middle school lunchrooms and spend a lot of time with the young students. In those first few years, the young kids would all tell me that they were soccer players,” says Dean. “Clearly, I needed to convince these young kids on the merits of playing football.”

Once they decided to give it a try, we needed to work hard as an entire youth program to cultivate a love for football in these children at an early age.

“The flag football program is for the really young kids (ages 4 to 7) and the main objective is to make football fun. These youngsters have fun playing and learning basics — things such as pursuit angles, vertical running, the field boundaries, basic rules, positions on the team and fundamental ball skills.”

Flag football is a great tool for cultivating a love for the game at an early age, says Dean.

Next on Dean’s list was to establish an introductory tackle football league for 8-year-olds on up. In this league, the young players (most of whom had previously gone through the Lowell flag football program), begin to learn more rudimentary skills such as basic form tackling and learning the Lowell football nomenclature.

“They may not run our exact plays, but they’ll learn our terms, our numbering systems and basic formations,” he says. “We don’t overload them with information though. At the high school level, our offense, for example, is pretty sophisticated and takes a certain-aged player to fully grasp it,” Dean says. “Again, the goal is for these players to learn the game and enjoy playing football.”

Dean and his staff meet with the area’s youth coaches and hold coaching clinics every year. They also initiate a program to have Lowell varsity football players visit each youth team and get hands-on experience instructing the youth league players. This program serves a dual purpose.

“Having varsity players providing instruction to the youth leagues empowers our high school players as teachers of the game. It also provides the youth players with someone locally to idolize and look up to,” says Dean. “It gives the youth league players a goal of one day being able to play varsity football for Lowell High School.

“As coaches, we want to absolutely exploit the most positive attributes of our players and put them on display to our youth football program. We take the hardest working, best-character players on the high school team and get them interacting closely with the area’s youngest players. This rubs off on the younger players and eventually it becomes the culture of our football program.”

“Lowell is a small, working-class community with great values and our team tries to embody this lifestyle with pride,” says Dean. “We never overly celebrate a victory on the field and we never throw our helmets in disgust or argue with the referees. We always shake hands with our opponents. We’re not a team that shows emotion on the field and we always try to act dignified on the field. In a town such as Lowell, they appreciate the way we handle ourselves.”

In Part 2 of our series, we will see how Coach Dean leveraged success in the weight room to create a winner on the field. This articles was written by Mike Podoll, associate publisher of AFCA Magazine. To connect with Podoll, follow him on Twitter @fcdaily_podoll.