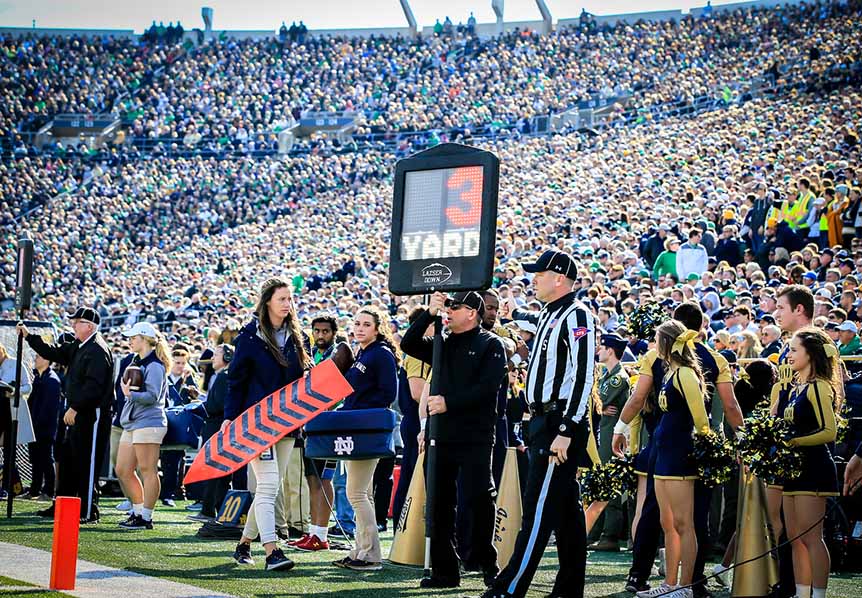 Like many products, the unique down-and-distance markers invented by Mike Foster were born out of frustration with existing products that never quite measured up to expectations. Foster, who founded Lazser Down, coached football for 30 years, making 13 moves to five different states across the U.S. and spending most of his time stalking college football sidelines. Sunday morning post-mortems always featured the same finger-pointing contest, with coaches arguing over who failed to communicate clearly.

“The excuses were always the same. We didn’t get the call soon enough from the press box. We had to take a delay of game. We had to waste a timeout. Someone told me it was 3rd-and-2, but it was 3rd and a foot,” says Foster. “I knew there had to be a better way. I had the idea, but I didn’t know how to execute on it until I joined up with a few engineers.”

With the help of those engineers, BV Systems, the Blue Valley Center for Applied Professional Studies (CAPS) in Overland Park, Kansas, and the added help of Jim Egender — the man responsible for developing the ubiquitous Dial-A-Down products seen on virtually every sideline over the past several decades — Foster invented the solution.

Lazser Down And Distance Markers offer instantaneous feedback on bright, easy-to-read LED displays, taking the guesswork out of sideline strategy when seconds count and inches matter. The Down Display and Distance Display use patented, synchronized radio technology to give immediate distance feedback accurate to the yard, foot or inch. Their foam housing units use rounded corners to reduce the risk of injury to anyone on the sideline and are fully waterproof, making them ideal for all playing conditions.

Foster initially vetted the Lazser Down products using multiple entrepreneurial incubators, taking his product from the Whiteboard to Boardroom with the help of Spark Lab, Digital Sandbox, GMS, ScaleUp! KC and the Kauffman Foundation, to name a few. After multiple iterations and much fine tuning, Foster introduced the product to the sideline for some real-world experience.

“We started with Tulane, Nebraska, Notre Dame and Central Catholic (Ill.) High School, where my son is a principal,” says Foster. “We did that for two years. Those schools used it for practice and games. They gave us feedback. We made modifications. Then, we started doing all-star games and national championships with NCAA Division II and NCAA FCS football. Now, over the last two years, we’ve been in over 100 televised contests, NCAA bowl games, Power Five games, you name it, we’ve been there and we’re proven to work.” 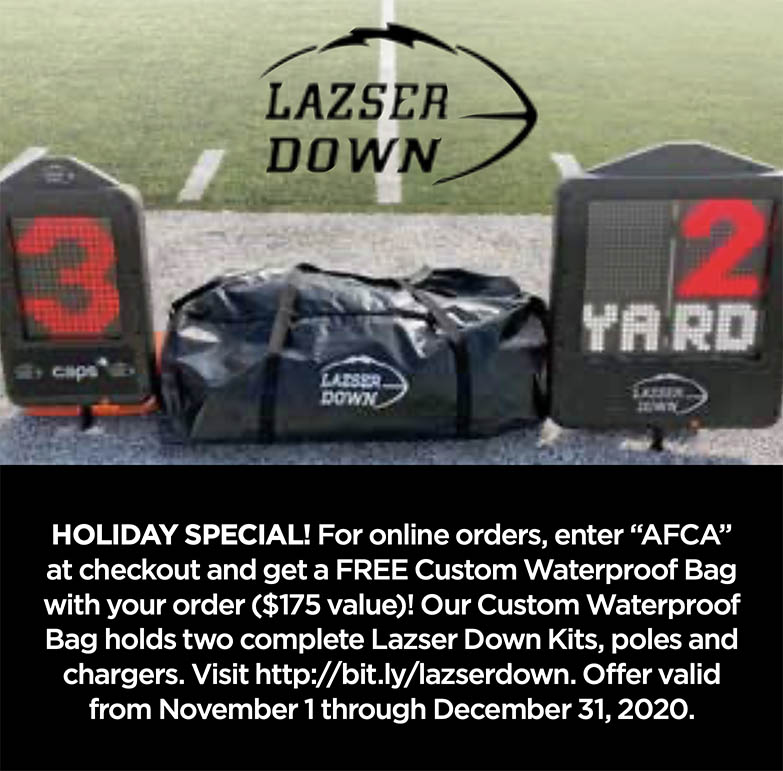 Making It Yours And Making It Pay

Most recently, Foster has introduced the ability for programs to use their Lazser Down And Distance Markers to generate revenue through a sponsorship program. With just a little communication, programs seeking to purchase the Lazser Down And Distance Markers can work with Foster to add the logo of a sponsor to the product, front-and-center. The Lazser Down logo will appear slightly offset, while the sponsor’s logo gets the “beachfront property.”

“In the case of one of our most recent customers, they purchased our system, added the sponsor’s logo on the outside, and ultimately made $11,000 on their sponsorship deal,” says Foster. “It was a pretty healthy return-on-investment. The markers go up and down the field, moving 80 or 90 times a ballgame; all eyes are on it. How many pieces of football equipment can actually generate revenue for your program? This one can.”