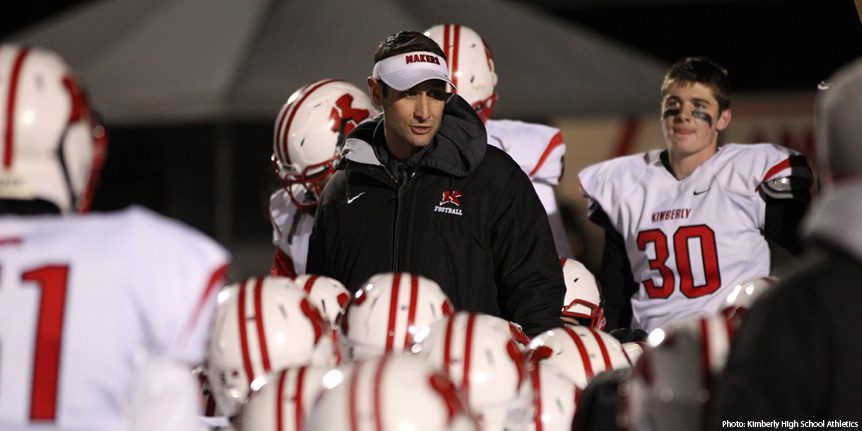 Jones worked tirelessly to implement a student-athlete-based leadership program called “The Leadership Council,” which serves as building block for a team-wide attitude of responsibility, hard work and service to others. Jones credits the tenets of this program as having a trickle-down effect throughout the team and says it’s a primary driver for success of the Papermakers football program.

But you don’t win seven state titles in 10 years as a head coach with just one go-to method for sustained success. Success on that scale relies on many variables, and Jones is the first one to credit other factors that have worked in unison to create this perfect storm of winning football in the Dairy State.

Jones was already a member of the Papermaker coaching staff prior to taking over as head coach, serving first as a position coach and then as offensive coordinator. The program was already an emerging football power in the area, having won back‑to‑back state titles in 2007 and 2008, but Jones and his staff knew a few on-field tactical changes could provide answers to some of the adversity and challenges his program faced in subsequent seasons.

Offensively, the Papermakers added a new dimension to their blocking scheme and Jones credits their offensive line coach, Mike Verstegen, a former NFL and Big Ten offensive lineman with the Wisconsin Badgers, with bringing the new ideas to the table.

“It’s hard to label our offense,” says Jones. “I’d say we’re a multiple-formation offense. I hate to label us spread, and we’re not quite a pistol-formation offense, either, but we do utilize our power run game out of the shotgun.

“Verstegen is a really good offensive line coach, and he helped us implement zone schemes into the mix. When you can have answers to defensive fronts, and run multiple schemes – both gap and zone schemes – especially at the high school level, it puts serious stress on the defense.

“We still hang our hat on the power run game, which was a gap scheme, with power and counter plays, but by mixing in some zone, it makes our offense unpredictable.”

On the defensive side, Jones listened to his defensive coordinator, Josh Heisler, and switched from a 3-3 stack defense to a 3-4 front that utilized more cover schemes than ever before.

“Going from a 3-3 stack to a 3-4 front wasn’t the biggest change in the world,” says Jones. “But it gave us better balance and provided answers to some of the things that opposing offenses used against us. It also allowed us to vary our cover schemes more. They proved to be nice changes for us. Our defense has been lights out … since we made the switch.”

Jones knew that one of the drivers to true sustained success is to build up his relationship with Kimberly’s youth football coaches. This is easier said than done, though, as at the youth football level, many youth coaches change over the years and leave coaching as their own kids grow up and go through the program.

“Our youth coaches have been great. They’ve run what we’ve asked them to run schematically and they use our terminology,” says Jones. “In turn, we try to provide them with as much coaching information as they’re willing to take.

“Every year, we hold a youth football coaching clinic where we go through our daily individual drills, practice plans and provide information on our offensive and defensive schemes. We also invite youth program coaches to attend as many of our practices as they can get to.”

The Papermakers coach says that the No. 1 job of his youth program is to get the players within the program to enjoy football and learn more about the game every year.

“It’s critical that kids learn a love and appreciation for football,” says Jones. “As such, I’ll tell my youth coaches that as an assessment of their youth program, I will never assess them as coaches or judge their coaching success, by wins and losses.

“The bigger assessment comes from analyzing how many kids return the following year. There are always variables, but overall, I want my youth coaches to strive for a 100-percent-return rate on players.”