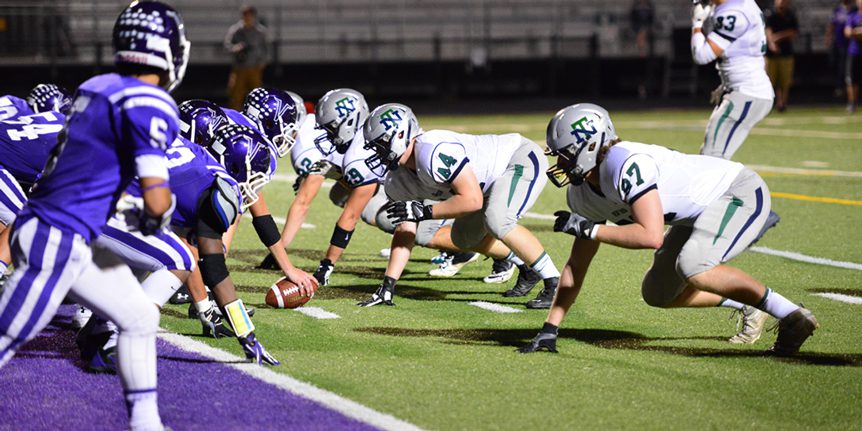 Given the success and prevalence of the spread offense, many teams have attempted to increase the amount of speed on the field by installing a three-man front. To have another look – perhaps a primarily run-stopping option – we adjust frequently to what we call the 3-4 Under, which resembles a traditional 4-3.

New Trier has had great success in this transition. During a three-game stretch in 2013, opponents gained – between the tackles – less than 100 yards, combined.

This production was a systematic success, a product of our defensive staff, and the years of hard work and devotion on the part of our players. With great understanding of the scheme, we learned to move seamlessly between fronts.

Shown in Diagram 1, our base 3-4 front features the traditional 4-0-4 alignment (Anchor, Nose, Tackle):

Our Under front includes one primary adjustment: walking our biggest, strongest outside linebacker down to the line of scrimmage. We played him in a 2-point or 3-point stance relative to strategy and possible stunt.

The obvious and most essential benefit of this front is that it allows, by alignment, time for our inside linebackers to read and move without taking on a block.

When executed correctly, the 3-4 Under occupies all five offensive linemen (See Diagram 2):

Before we instruct athletes how to play, we must find the types of athletes needed to accomplish their goals. As coaches, we must put our players in position to succeed, which includes talent evaluation. We can only ask an athlete to do a job they are capable of doing. For each athlete type, we are looking for both absolute and ideal characteristics.

Absolutes: We look for long, strong bodies to play the strong-side. An Anchor should be heavy handed (strong, aggressive, accurate hand-play). He should have mobile hips and the ability to play both laterally (toss, sweep) and vertically (rush the passer).

Ideals: In years when we were lucky enough to have an Anchor with high athleticism, we could be more creative with our zone-drop options to the field.

Absolutes: Leverage and toughness are the two must-haves to play nose in the Under front. We are asking this player to occupy two offensive players as often as possible. He must bend well and play low to the ground, be great with his hands, be quick off the snap, and be able to turn his hips to split double-teams.

Ideals: Identify a mismatch such as size or strength. Many teams will play their 1 technique nose as a “space-eater.’’ A 275-pound nose with great strength and the above attributes provides cover for inside linebackers. Or, if the nose has fantastic speed, he may be able to consistently turn a center by beating him off the snap.

Absolutes: We look for great hands and eyes. A good tackle can maintain separation and react quickly to his visual cues. He needs to have the strength to play a base block, and the field-savvy to follow a pull, spill a trap, play screens, and rush the passer.

Ideals: We have had the most success with smart 3 techniques, but they have to be “field-smart.” When we can ask a player to show false alignments, be mobile pre-snap, stunt with accuracy, and still be able to filter through visual information at speed, that is when we know we have a special player.

Absolutes: The Buck is a hybrid player. We’re looking for the biggest, strongest, rangiest linebacker of the group, or the fastest, most athletic defensive end. He has to be able to drop and cover the flat if necessary, blitz with success, and play strong on an offensive tackle.

Ideals: Speed is the key. If we can quickly switch back to our Base 3-4 without needing to sub a player at outside linebacker, we have more confidence in frequently running the Under front.

Defensive line is the hardest part of the defense to play. Not only is it extremely physical in the trenches, but defensive linemen are at the disadvantage of not knowing the snap count or play. Linebackers at 4-5 yards have more time to read – as do defensive backs – but the defensive linemen have a fraction of a second to play physical, accurate football, and make decisions that support the scheme.

As coaches, it is our job to make the players’ jobs as easy as possible. We have to scout and understand all possible offensive plays and schemes our defense might experience – all blocking schemes, misdirection, formations and tendencies.

From there, we must develop simple rules for our players to follow. If followed, the rules must account for all scenarios.

I tell our defensive front all the time: The play doesn’t matter – your keys matter, and your reaction to those keys will make you successful.

As a coach, I try not to give my players more than five keys to remember. I call it the “Rule of 5.”

If I ask them to remember anything more than that, I believe I have given them too much to process, which results in slower play. We want to play fast and accurate, so we keep it simple and direct, and we do not waiver from our expectations.

Here is what I ask my players to focus on – in order – and with perfect execution: stance, attack, control, react and finish.

1. Stance – Stance begins with focus and understanding. Understand the called front and play, and use supreme focus in your alignment. A 5 technique requires the player to put his inside hand down, inside foot back (and ready for first step), appropriately distribute his weight pre-snap (relative to stunt, if applicable), and align his inside eye with the offensive tackle’s outside eye (See Example 1).

Make sure to slow it down. During the first few film sessions, pause before the play, identify the strict alignment in the front, and show the players who is perfect in their stance/alignment, and who is leaving the defense vulnerable before the ball is even snapped. 2. Attack – We spend a lot of time on teaching attack. The attack point is precise and requires focus, speed and aggression. Once a player is in his stance and aligned correctly, he locks his eyes onto the point of the offensive player he is about to strike.

For example, a 5-technique anchor will lock his eyes onto the upper-outside corner of the offensive tackle’s jersey number. Once he sees movement, he attacks with his hands: full extension, elbows in, thumbs up, bringing the hips.

The object of the attack is to knock a blocker off his path and allow an extra moment to process and read the block. (See Example 2)

Players must focus on sight, not sound. Incorporate plenty of drills in which an athlete’s movement is based on a visual cue. 3. Control – Upon attack, the player should be under control: arms extended and controlling a block, good (low) pad level, feet and hips underneath him, careful not to overextend and lose balance.

During hand-work drills, whistle or call a freeze command. If the athlete is under control, he should be able to freeze his position and correct, if necessary.

Abiding by the Rule of 5, we try to become masters of five types of block:

Base – Assuming the athlete has accomplished proper attack and is under control, the base block becomes a test of grit. The athlete must maintain his gap assignment and leverage. Don’t pick a side! We cannot create interior lanes.

Down or Inside Release – A powerful and accurate attack should slow an offensive lineman’s interior movement. Whether he is blocking down on another defensive lineman or releasing inside for one of our linebackers, the task is simple: squeeze. Squeezing keeps the offensive lineman off our players, and puts us in position to spill a trap or kick-out block. To squeeze, we drop our interior elbow to the hip of the offensive player, maintaining pressure, therefore maintaining the line of scrimmage and our gap.

After a down block, watch for a trap. We spill – or wrong-arm – all trap blocks, which seals off any interior lanes. Assuming the defensive lineman has taken care of his down block, he should have squeezed himself into perfect position to spill the trap.

Teach down-block, squeeze and spill recognition as often as your practice schedule allows.

Reach Block – Get width! The defensive lineman must keep his arms extended, and work to keep his hips outside the block. Should a defensive lineman lose position on the snap, he must work underneath the reach block, then sprint horizontally down the line of scrimmage in the direction of the initial block.

Double-Team – Start with a powerful attack, then turn into the secondary pressure. As always, a good attack increases the odds of success. Against a double-team, a good attack limits the potential of the initial blocker to get hip-to-hip with the second blocker. That distance between hips is all the opportunity a defensive lineman needs to be disruptive.

Once the player feels secondary pressure, he should turn his back to the pressure while pressing forward to split the space between the linemen’s hips. This needs to be practiced over and over until it is a knee-jerk reaction.

Know when enough is enough. To establish a behavior as habit, it must be practiced. It is up to the coach, however, to know when it is time to pull back. In a double-team drill, the defensive lineman is at a clear disadvantage. Let him rest. He can’t help the team if he’s injured and sitting on the bench.

Pass Set – Speed is important and knowing when to turn the corner is crucial. Speed can get you pressure, but the turn can get you sacks. Pass Set might be the easiest block variation to recognize, but it has the highest amount of response variation. Each coach needs to develop pass-rush moves he is comfortable teaching, then progressively install.

We start with a Bull Rush on one edge of the offensive lineman, then go from there. From Bull Rush, we move to Push-Pull, then use that to set up our double-moves.

Regardless of how a player wins his one-on-one battle, it is important that he know when he has won. Once he is hip-to-hip with his blocker, he should rip through, drop his inside shoulder and turn the corner toward the quarterback. (See Example 3)

Stay within the toolbox. We ask our guys to start on level one: hands on half of a man, Bull Rush. Once they have mastered it, they can move on to level two. In a given year, we might allow three to four players a full range of moves to use at their discretion. Other than them, we have a handful of big guys who master the Push-Pull and the Rip. They stay there all year with great success. 5. Finish – Do what you are supposed to do, over and over, and the finish will take care of itself. Stay low, stay hungry, and arrive in a bad mood!

We teach safe tackling daily, but many tackles by defensive linemen aren’t pretty. They don’t have to be. They just need to put the ball carrier on the ground. Putting yourself in position to make a tackle is the key.