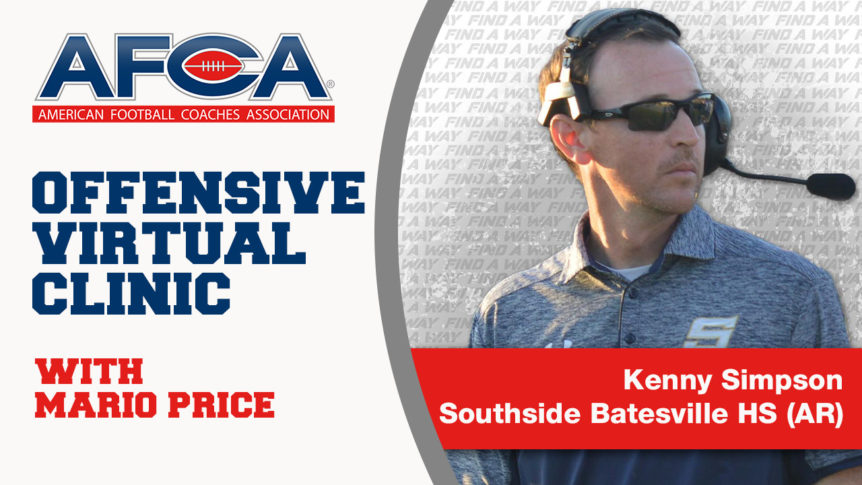 While you can run the buck sweep out of any formation, Coach Simpson shares that he likes to run it out of a spread type of wing-t formation. He also tries to capitalize on RPO type plays, even out of the wing-t set, to protect the run game.

RELATED ARTICLE: The Best Way TO Defend The Zone Read

“We have to build in answers for when a defense is going to run different things against us,” said Coach Simpson. “We want to build in play-side answers with our blocking scheme and backside answers usually with the RPO game.” 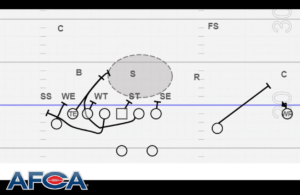 When running the buck sweep, one advantage to the modified spread wing-t set is it splits the defense. The offense also treats it as a split field with play-side and backside. Coach Simpson also says that he likes to marry the wing-t with the buck sweep to run double handoffs, inside runs, and waggles. This look also allows you to base your RPO and play-action concepts off of the buck sweep. Everything can branch off of the buck sweep simply by making key adjustments.

The buck sweep is a gap down backer blocking scheme, which means block the first defensive player inside on the play-side. The goal is for any down blocker to end up with their backside facing the end zone that the offense is working toward. This prevents the defensive player from crossing the lineman’s face and making a tackle.

Running RPO’s Off of Buck

Q: What advantages or disadvantages are there for outside zone, under center toss, and buck sweep? What made you major in this play over other plays?

A: On buck, you’re creating angles and it’s less teaching. With zone, you have to have more traditional looking lineman to get a push as opposed to the wing-t where you are creating down blocks and gaps.

Q: What is your running back’s vertical alignment?

A: We would like our running back to have their heels on the quarterback’s toes.

Q: Do you flip-flop the offensive linemen like a strong-side and weak-side?

A: Yeah, we do because our strong tackles wouldn’t be able to handle the thing our quick tackles can do like blocking screens.

Q: How many times per game do you run buck sweep and what other schemes do you run?

A: We run buck, our version of strong belly, and power read. If they don’t stop buck, then I don’t stop calling it.

Q: What adjustments do you see defenses make to the changing guards and tackles?

A: We get them into a split field look. When we shift to strong/weak look we try to really hit the defense.

Q: How do you teach the quarterbacks about making the right decision on an RPO?

A: I let them make a ton of mistakes in the spring and summer, and then teach them on film review. I also have a kill signal where I can kill any RPO.

Q: What is the trend you see opponents use against you?

A: We’ll watch film on technique because that won’t change, and then we’ll also prepare for looks that we think we could see. If we do get to a game and see a defensive look we didn’t work, we’ll have to make adjustments as we go, but typically you can be prepared based on what has stopped your offense in the past.

For a more complete breakdown of the RPO’s discussed in Coach Simpson’s Virtual Clinic, along with numerous other videos, please log in to your AFCA membership account and search through the AFCA Educational Library.