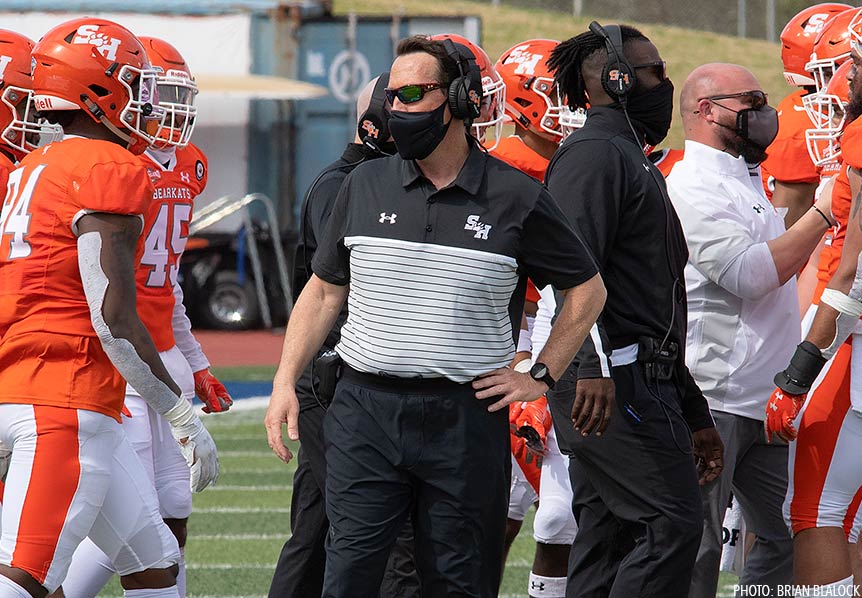 Those who win together, celebrating mutual success, they find happiness in the thrill of the moment. They share smiles, laughs and a fleeting sense of fulfillment.

Those who struggle together, who work hard and hurt and fail, fight and weep and fail again – those who sacrifice together, for each other – find a deep fulfillment and joy, and an immortal bond.

This is the story of the 2020 Sam Houston State University (SHSU) football team. The last team standing in an FCS season of attrition, the Bearkats put it all on the line for one common goal and came out the other side as national champions.

SHSU head coach K.C. Keeler describes the team’s 2020 journey as, “the hardest season ever to navigate.” Which, comes as a surprise to no one, considering all the hurdles the COVID-19 pandemic threw at football programs. The pandemic threatened to derail the season before it even began, and it continued to make life difficult every step of the way.

“Every coach I talked to either on the phone or before the game when we would play would say the exact same thing. They were physically and mentally exhausted as a staff and as players,” Keeler says. “We thought in June we were coming back to get ready to play in September. And then we decided we were going to postpone. And then there were so many question marks going through the fall, watching how the fall was being handled. Would we get to a spring season?

“My whole career has always been about challenges or opportunities. And so, I saw these challenges that we had with COVID as an opportunity to bring us even closer together. We talk a lot about integrity and about the teams that truly want to compete and win championships. Those teams are going to find a way to manage through this COVID situation.”

As is often the case, attitude reflects leadership. For SHSU, the positive attitude was more than just surface- level positive thinking. Keeler’s approach was mirrored by a seemingly built-in response from the team throughout a difficult season.

The challenges started before the season began. While the decision process unfolded on whether to have a season, or when to have the season, the coaching staff had to institute and maintain new standards of readiness and discipline.

“If the players wanted to play this season, it wasn’t, ‘Go hang out with your teammates,’ which you always want them to do. But it’s, ‘Go hang out with your roommates because your teammates could get caught up in contact tracing,’” Keeler says. “There was a lot of education taking place, but it was also a lot of, ‘If we do this right, we have a good team, maybe the best in the country. So, those sacrifices that you’re going to make, they’re going to be worth something down the road.’”

Adding to the challenges of the pandemic, the past year was a politically and racially charged powder keg, threatening to blow up everything the SHSU staff had been building towards for years. If coaches mishandled a delicate issue or ignored the big-picture concerns of their players, they risked not only failing in their responsibility to produce better men, but their season would surely be lost as well.

“We have a situation where we have George Floyd’s murder on national television. We’re all looking right at it,” Keeler says. “I’m the head coach of a lot of Black and brown players, and I’ve never walked a mile in their shoes. And so, I thought it was really important that as a staff, we decided that we were going to have those uncomfortable conversations.

True to form, the Bearkats embraced these tough conversations, during what was already a year filled with unprecedented health challenges and rallied together in a profound way.

As the season began, evidence manifested early on that this version of SHSU football was special. All the adversity — including the sobering possibility of losing the opportunity to play the game they loved altogether — resulted in a mentally bulletproof squad hungry for the opportunity to compete.

“The first game, we’re playing Southeast Louisiana, and it’s a hot, muggy February night, and the air conditioning goes out,” Keeler recalls. “Players are in the locker room dressing for the game with sweat pouring down off of them. And you know what? No one said ‘Boo.’ They just wanted to play. They realized football was taken away from them in the fall, and they just felt so blessed to have it in the spring, there was this new appreciation for not taking this for granted.”

The Bearkats rattled off six straight wins in a perfect “regular-season” showing that left them primed for a title run. Maintaining their unblemished record through the playoffs would prove no easy task, but the team always responded when their backs were against the wall.

In May, SHSU completed its perfect 10-0 season after running a gauntlet of championship-caliber programs. Every single playoff game was a competitive affair, and Keeler’s squad defeated all four postseason opponents by a combined margin of just 15 points.

Time and again, SHSU overcame. In the championship game over South Dakota State, after mustering just 17 points in nearly four full quarters of play, they scored the go-ahead touchdown with a perfectly placed pass over the middle that split two defenders with just 16 seconds remaining.

No Margin For Error

Looking back on an incredible year, Keeler takes pride in all the program’s accomplishments, but also takes time to ponder what is to be learned from such an unusually grueling season with little wiggle room on any front. One of his biggest takeaways? Learning to stay in tune with the wear and tear on his players.

It takes a championship work ethic to continue to push when everyone is exhausted. It takes championship poise and trust to know when it’s time to ease up. In Keeler’s experience, the best way to tip-toe such a tricky tightrope is to continually fall back on the relationship coaches have with the players.

“It’s all about relationships, and that’s what I love about coaching,” Keeler says. “It’s the relationships that you build, and you gain trust with each other over a period of time.

A lot of coaches — the vast majority of coaches in all likelihood — aspire to be the best. Few will ever attain this lofty goal. The math just doesn’t work out. At the end of each season, though many can claim they were the best, only one team gets to hoist the trophy.

Despite this, Keeler’s approach should encourage everyone to aim for the pinnacle. Hard work and sacrifice may not guarantee the desired outcome, but the riches it bestows upon those who find their bond and fulfillment in striving and daring to be great far outweigh the cost.

“It’s not okay to be okay. That’s not the goal. I didn’t just come here to win. I came here to win a national championship,” Keeler says. “Even if you fail, there’s so much about trying to be the best that is going to permeate through the rest of your life, and that’s the only way I can do it.”