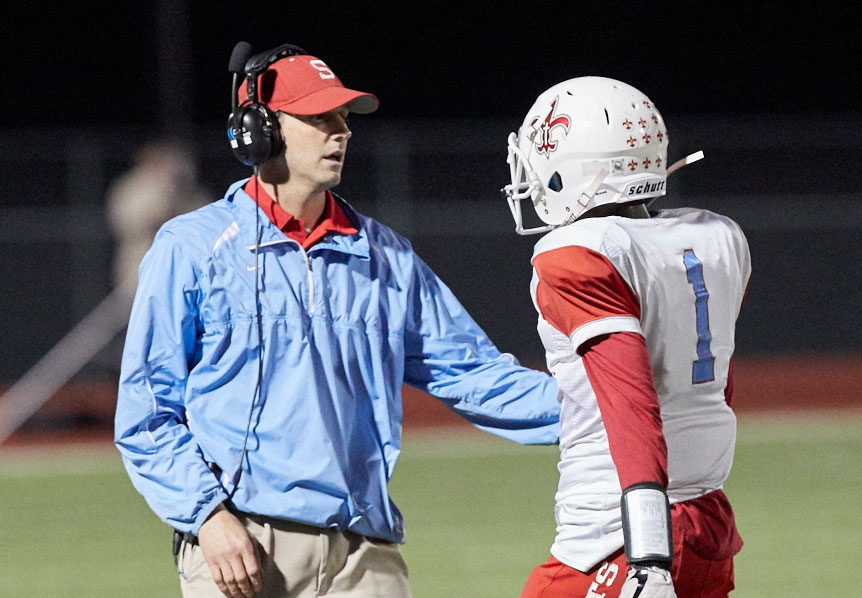 Jason Lovvorn’s wife would tell you it’s miserable around their house the weekend after a loss, which is not unusual for

football coaches’ homes. But, the head coach at First Baptist Academy in Dallas says while the losses may sting, he has a better understanding of his overall goals these days.

“I am intensely competitive — love to win, hate to lose. But now I do a better job of prioritizing my players’ success over my success,” says Lovvorn, who was hired at First Baptist in 2009 at the age of 23. “Winning games is just as important to me as it always has been, but it is more fun when the focus is on helping others be successful.”

As Lovvorn and his staff develop players to succeed at the next step in their lives, let’s be clear, they’re winning a lot of games along the way.

In 2012, Lovvorn helped the school secure its first playoff win in 28 years. From there, First Baptist Academy has won four district championships and a state title in 2013.

“Going 14‐0 and winning the state championship with a group that was so instrumental in turning around our football program was special,” Lovvorn recalls. “I am thankful for those players early on who believed in what we were doing before even seeing the wins. They established a culture of hard work that has made us successful.”

For Lovvorn, he’s dedicated his life to Faith Baptist, which is his alma mater. During his playing days, he was a two‐year starting quarterback who amassed 4,500 yards and threw 45 touchdown passes before moving on to Baylor University, then concluding his college career at Howard Payne University. Beyond being named head coach at such a young age, he earned the title of head of school when he was just 28.

Having the role of coach and the top administrator makes Lovvorn, who was named to the AFCA’s 35 Under 35 Coaches Leadership Institute, the face and leader of First Baptist Academy. The wins, the championships and student development under his watchful eye are benefits of the job, but being a leader also comes with substantial responsibility. Not everyone is going to fit into your system or buy into your approach of how to run a program or school. He says one of the hardest parts of both jobs is when an individual must be removed from the organization.

“Whether it is kicking a player off a team, expelling a student or terminating an individual’s employment, these are tough decisions that come with being in charge,” Lovvorn explains. “When making this kind of difficult decision, it is essential to evaluate and weigh two primary questions: What is best for the individual, and what is best for the organization?

His leadership also has been tested in the last year as COVID‐19 continues its glacial progress. Lovvorn sees this as a chance to teach students to embrace opportunities and appreciate the daily things everyone tends to take for granted. Plus, prior to COVID‐19, he always stressed how discipline translates to success on the field. Now, it’s even more important.

“We have been extremely strict with our COVID‐19 policies as a school and a football program. Our plan is to minimize exposure to the extent that when someone tests positive, we do not have to quarantine large groups at a time. They have responded remarkably well to everything that has been asked of them,” Lovvorn says.

Despite the challenges of COVID‐19 and the tough decisions he has to make as an administrator and coach, Lovvorn knows he’s one of the lucky ones who gets to do what he loves every day of his life.

“From building relationships and being part of a player’s physical and spiritual development to building a championship program and breaking down film and game planning, I love what it means to be a football coach,” Lovvorn says. “I am thankful that God has called me to coach, and I get to do something that I love every day while positively impacting people’s lives.”