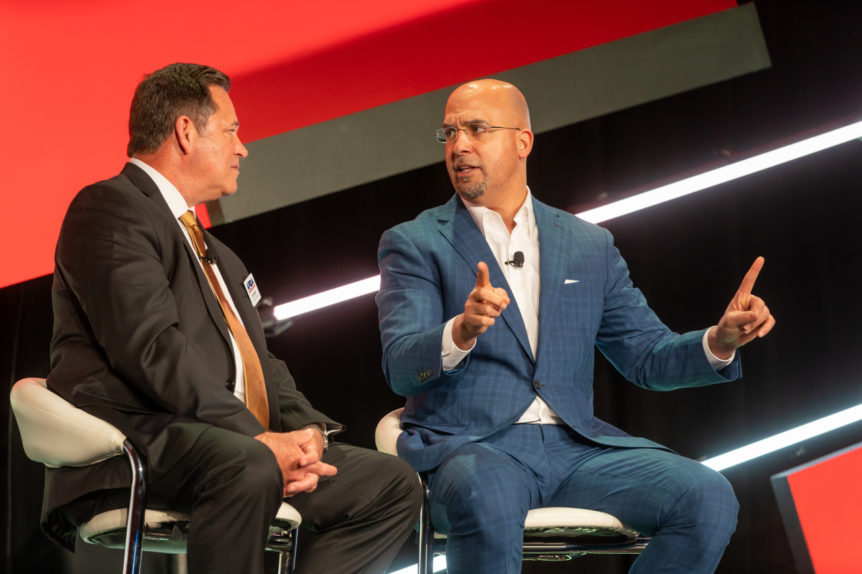 James Franklin sat down with the AFCA’s Executive Director, Todd Berry at the 2020 AFCA Convention in a Q&A formatted General Session where coaches in the audience had the opportunity to ask questions. James Franklin recently completed his ninth season as a collegiate head coach and his sixth at Penn State. Since taking over the program, he has led the Nittany Lions to six consecutive bowl game appearances, including the Rose, Fiesta, and Cotton Bowls, as well as a Big Ten Championship. Prior to Penn State, Franklin served as the head coach at Vanderbilt University from 2011-2013 and has a combined 24 years of coaching experience at the collegiate and NFL level.

Berry began the session applauding Franklin’s notable involvement with the AFCA over the course of his coaching career. Franklin has been committed to progressing the game of football through coaching development and mentorship. Coach Franklin discussed his passion for giving back to the profession and providing opportunities for talented young coaches to advance within the industry. Over the course of his career, Franklin has had a significant impact on the AFCA’s 35 Under 35 Coaches’ Leadership Institute, the Graduate Assistant Forum, as well as various other initiatives he has participated in at the 25 conventions he has attended.

Throughout the session, Franklin and Berry discussed a multitude of topics pertaining to various aspects of the industry. One specific topic that stood out was program culture. Franklin stressed that a successful program doesn’t exist unless a head coach has, “A core nucleus of guys.” Coach Franklin mentioned how he has various staff members that have been with him since the beginning of his coaching career.

Simply stated, Franklin said he would not be where he is today without them. In addition to a core group of staff members, Franklin also addressed the importance of core values when stating, “Anyone can identify problems. You get paid to SOLVE problems.” In the video above, Franklin discussed solving the problem of having seven walk-ons on his Vanderbilt team who had never played high school football. As a head coach, it is imperative to have people you can trust and values you believe in to get you through times that test your program.

Franklin being the family man that he is, spoke on balancing the roles of father, husband, and football coach with profound insight and wholeheartedness. In his response, he talked about the necessity to first, and foremost be honest with your spouse or significant other. Specifically, be honest with the fact that being a football coach is not a job, it is a lifestyle. Balance can be interpreted differently from family to family, but the importance lies in looking at what balance really means to you and your family. Once that is established, Franklin emphasized to not stray away from it because then a work-life balance can be more easily sustained.

RELATD ARTICLE: 13 Keys To Success For The Graduate Assistant

Berry and Franklin concluded the session answering questions from the audience on specialization in sports and challenges in the football industry. Franklin preached to the crowd how sports specialization in the high school setting is frowned upon by football coaches. He stated how he wants to recruit athletes who can show as much athleticism as possible. Berry mimicked Franklin’s response and added his judgment stating, “90% of coaches don’t necessarily want their athletes specializing in football alone.” Additionally, Franklin provided his opinions on the current challenges in football; ranging from standardization to fighting for college football, and ultimately believing in the best interest of the game. Tune into the AFCA Educational Library to hear the complete dialogue between Coach Franklin and Todd Berry answering questions from AFCA members, just like you!

To watch Coach Franklin’s General Session speech, along with numerous other videos and content, please log in to your AFCA membership account and search through the AFCA Educational Library.