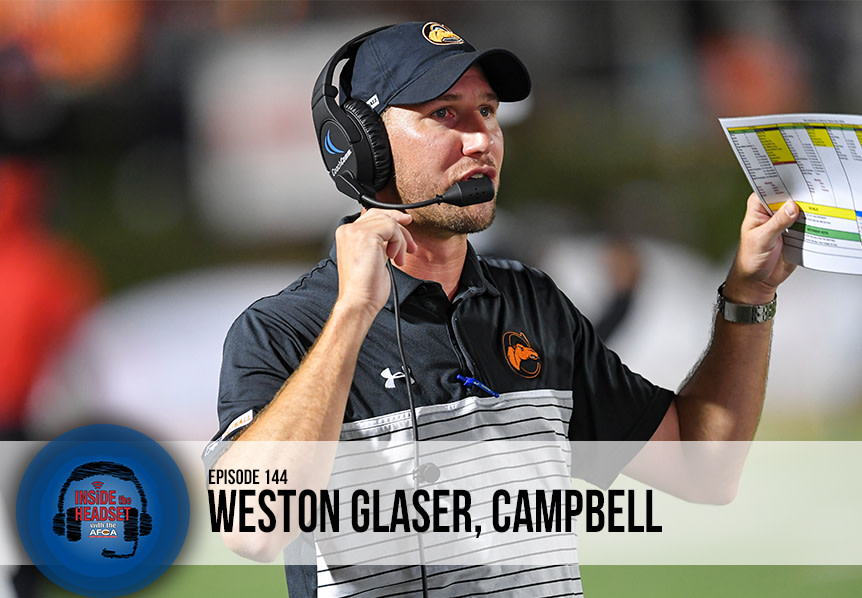 This week on Inside the Headset, we are featuring Campbell University Defensive Coordinator, Weston Glaser. Coach Glaser discusses transitioning from offense to defense, shares his unique experience working with NASCAR, and promotes the importance of learning new perspectives.

Weston Glaser was named Campbell’s defensive coordinator following the 2018 season. Glaser started his coaching career at his alma mater, Sam Houston State where he played quarterback from 2008-09. With Glaser on staff from 2010-13, the Bearkats posted a 31-10 overall record with two Southland Conference championships and back-to-back FCS National Championship game appearances. The Waco, Texas native also made a stop at UTEP from 2013-15. During his time in El Paso, Glaser worked with the Miners’ linebackers and defensive backs. Glaser also spent time at the NFL level, working for the Cleveland Browns scouting department from 2014-15. At the same time, Glaser also worked as an assistant pit crew coach for Hendrick Motorsports of NASCAR Sprint Cup Series and Nationwide Series. He worked predominantly with the pit crews for Jimmie Johnson and Dale Earnhardt, Jr. Prior to joining the Campbell staff, Glaser spent the 2018 Spring as defensive coordinator at Howard Payne University after serving as a defensive quality control coach at Texas A&M, where he worked with the defensive backs.

RELATED CONTENT: Inside The Headset: Enhancing the Experience of College Football [PODCAST]