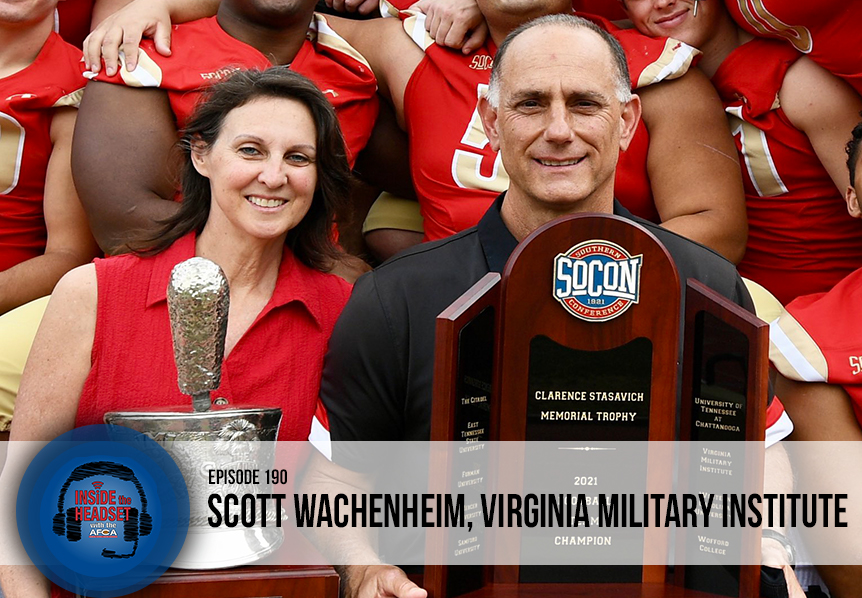 This week on Inside the Headset, we are featuring Virginia Military Institute’s (VMI) Head Coach, Scott Wachenheim. Coach Wachenheim highlights the unique challenges of coaching during the pandemic, shares the importance of recruiting players that fit your program, and gives tips on how to turn a struggling football program around.

Scott Wachenheim recently completed his sixth season as the Head Coach of VMI. This past season, Coach Wachenheim led the team to a 6-2 overall record and a Southern Conference Championship for the first time since 1977. Coach Wachenheim has brought excitement and success to a program that has not experienced much of it since the 1970s.

Prior to VMI, Coach Wachenheim spent five seasons at the University of Virginia where he primarily coached the offensive line. Wachenheim also has NFL coaching experience under his belt as he spent one season as the tight ends coach with the Washington Football Team. Coach Wachenheim graduated from the Air Force Academy with a bachelor’s degree in Civil Engineering and was a four-year starter from 1980-83. He earned first-team All-WAC and honorable mention All-America honors his senior year. Wachenheim began his coaching career at Air Force in 1984 when he served as offensive coordinator of the Air Force Academy junior varsity squad before embarking on his active duty commitment.