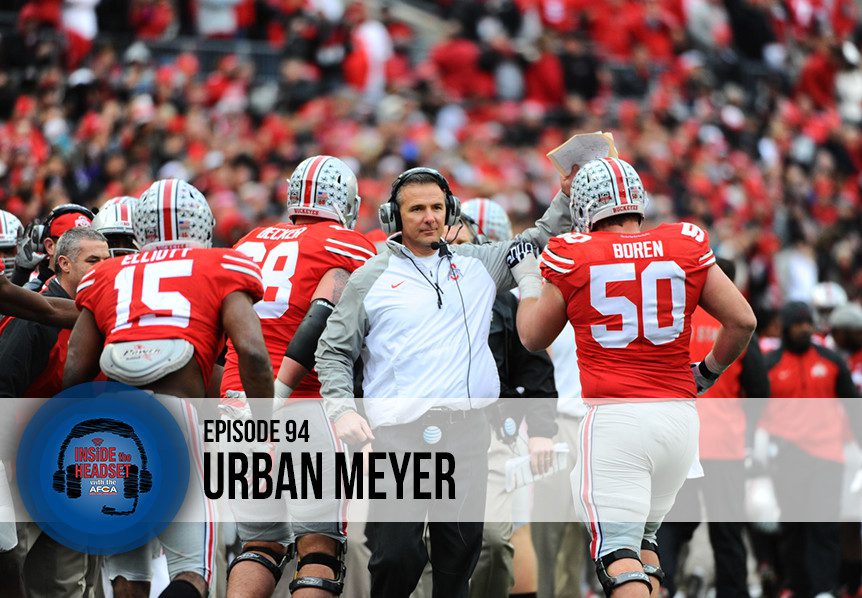 This week on Inside the Headset we’re joined by three-time national champion Head Coach Urban Meyer. We discuss his coaching career, the “Real Life Wednesdays” program he instituted with his teams, and what he would change about college football.

Coach Meyer’s career began as an assistant at St. Xavier HS (OH) working with the defensive backs in 1985. He went on to be a graduate assistant at Ohio State for two years (1986-1987) before joining the staff at Illinois State to work with the outside linebackers (1988) and later the quarterbacks and receivers (1989). Coach Meyer also served as the wide receivers coach at Colorado State (1990-1995) and Notre Dame (1996-2000). Meyer’s first head coaching position was at Bowling Green (2001-2002). After another two tremendous seasons leading Utah’s program (2003-2004), he was named head coach at Florida (2005-2010) and led the Gators to National Championship victories in 2006 and 2008. Meyer sat out the 2011 football season to focus on his family and personal health, and he worked as an analyst for ESPN during that time. He was named Ohio State’s head coach following the 2011 season, and he led the Buckeyes to a National Championship victory in 2014. Meyer retired following the 2018 season, and he currently serves as an Assistant Athletics Director for OSU and analyst for Fox Sports.