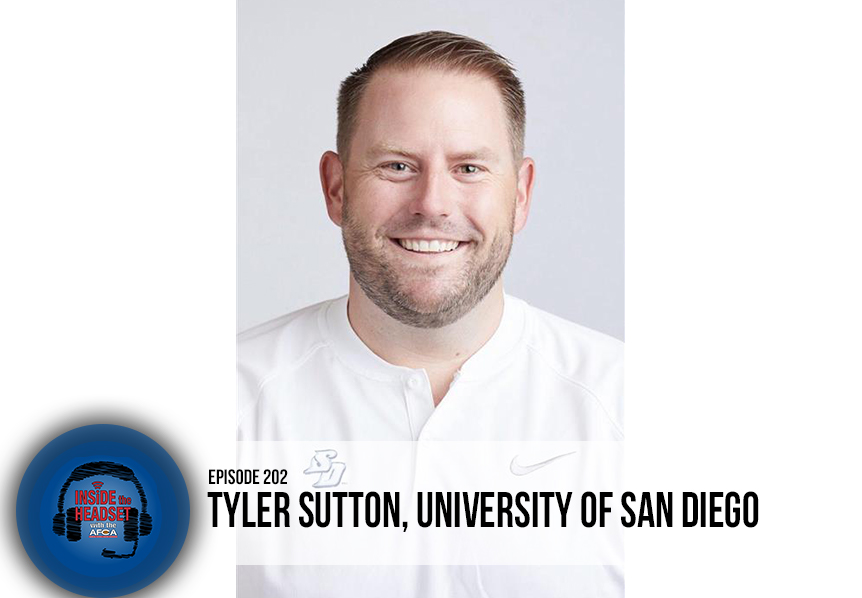 This week on Inside the Headset, we are featuring University of San Diego’s Offensive Coordinator and Running Backs Coach, Tyler Sutton. Coach Sutton highlights his early coaching experience as a graduate assistant, shares advice on how to become an effective coordinator, and explains his philosophy for coaching running backs.

Tyler Sutton enters his ninth season as an assistant coach with San Diego in 2021 and his second as the offensive coordinator. Sutton has risen through San Diego’s coaching ranks over the last eight seasons after joining the Toreros in 2013 as a volunteer offensive assistant before being promoted to assistant coach for the 2014 season. He started coaching the running backs before taking on the special teams coordinator role in 2018. He also served as the team’s recruiting coordinator during his tenure. In his time with USD, Sutton has been a part of six consecutive seasons of nine or more wins, seven conference championships, five FCS Playoff appearances, and two FCS playoff wins.

Prior to coaching in San Diego, Sutton spent the 2011 and 2012 seasons as a graduate assistant coach at his alma mater, the University of Redlands. He served as the Bulldogs’ defensive line coach and added special teams coordinator responsibilities for the 2012 season. Sutton began his coaching career at Granite Hills High School in San Diego County. Coach Sutton played football at the University of Redlands for four seasons and received All-Conference honors his senior year.