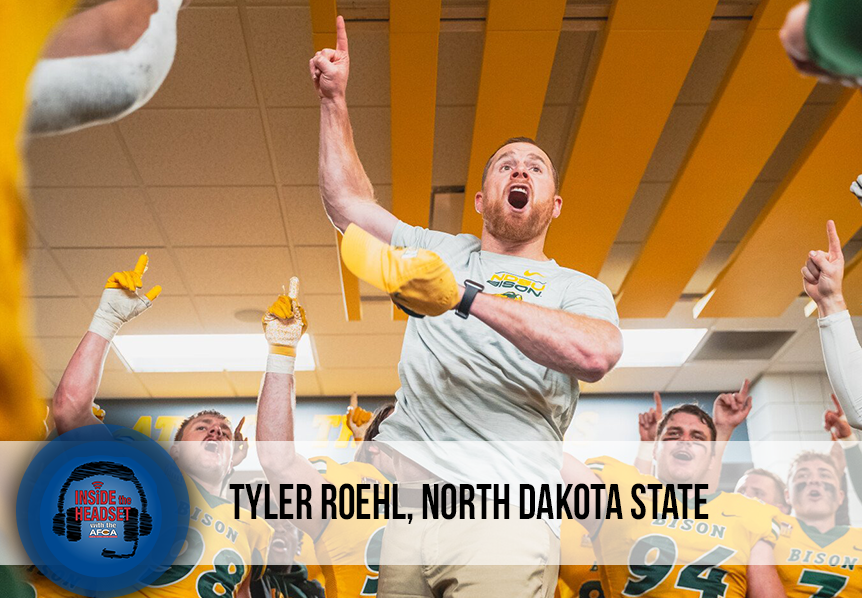 This week on Inside the Headset, we are featuring North Dakota State’s, Offensive Coordinator, Tyler Roehl. Coach Rhoel goes in-depth about his coaching philosophy, gives insight into the Crew Chiefs, and talks about life after football.

Tyler Roehl is a former All-American running back turned coach at his alma mater, North Dakota State. Roehl now serves as the Bison’s Offensive Coordinator and Tight End and Fullbacks coach. Roehl is no stranger to success. Team accomplishments while Roehl has been a Bison include the following: Great West Football Conference championship, 7 national championships, and eight Missouri Valley Football Conference titles.

Roehl’s tight ends and fullbacks set a school record of 4,601 rushing yards. The “Crew Chiefs” also contributed 51 caught passes for 677 yards, 17 of the team’s 29 receiving touchdowns in 2019. In 2021 the Bison’s rushing offense was ranked number 2 in the FCS.

Roehl also signed as an undrafted free agent to the Seattle Seahawks in 2009 and later coached for two seasons at Moorhead High School before returning to North Dakota State.