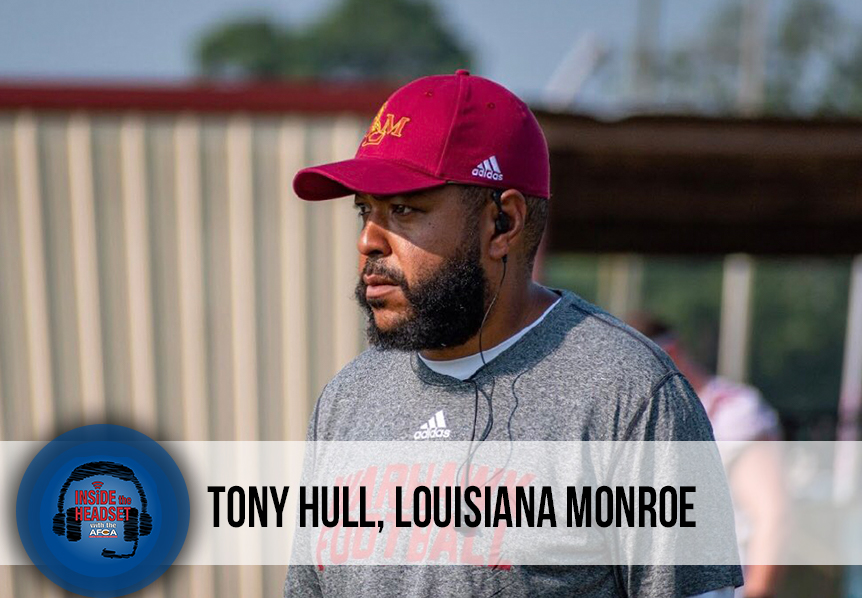 This week on Inside the Headset, we are featuring the University of Louisiana Monroe’s running backs coach Tony Hull. In this episode, Coach Hull talks about coaching in his home state, transitioning from working as an engineer at NASA to coaching, and shares how he puts players in a position to be successful.

Tony Hull, one of the most respected coaches in the state of Louisiana, is entering his second season at The University of Louisiana Monroe and his first season as the team’s running backs coach. Hulls first year with the Warhawks he served as the outside receivers coach. Hull returned home to Louisiana after serving for four years as the associate head coach and running backs coach at Kansas (2016-19) and as the co-offensive coordinator and inside receivers coach at Hawai’i in 2020. From New Orleans, Louisiana, Hull coached Pooka Williams Jr., now with the Cincinnati Bengals, to consecutive 1,000-yard rushing seasons in 2018 and 2019, a feat accomplished only once before in Kansas football history.

Hull joined the collegiate coaching ranks after a distinguished coaching career in the Louisiana high school ranks. In nine seasons as the head coach and offensive coordinator of Warren Easton High School in New Orleans, Hull led the stagnant program into a contender. He arrived at Warren Easton in 2007, the school’s first season playing football following Hurricane Katrina, and guided the Eagles to playoffs in seven of his nine seasons. His resume included a state championship game appearance in 2014 and a state semifinals showing in 2015. Hull developed the Eagles’ players on the field as he mentored 45 players who went on to earn Division I football scholarships. Six of those players earned a nod in ESPN’s Top-300 lists, while one of his athletes was named the 2014 Gatorade Player of the Year and Mr. Louisiana Football.