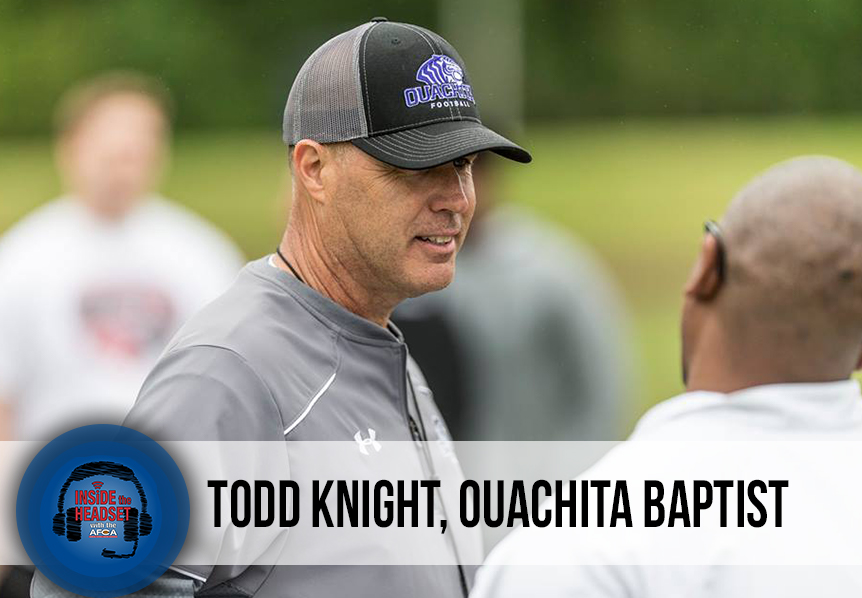 This week on Inside the Headset, we are featuring Ouachita Baptist Head Coach, Todd Knight. Coach Knight takes us on a deep dive into his program philosophy, highlights the importance of making practice count, and shares his personal relationship working with the AFCA.

After 21 seasons – and 22 years – as head coach at Ouachita, Todd Knight is the longest-standing college head football coach in Arkansas. Knight has established Ouachita as an elite program among all Division II institutions. A proven leader, he guides the Ouachita football program with integrity and passion.  In the 2019 season, Coach Knight took the Tigers to the Division II playoffs after leading them to an undefeated regular season at 11-0.  The 2019 season was Ouachita’s third undefeated regular season and the third straight GAC Championship.   The Tigers hosted a DII playoff game for the third time since 2014. In the conference’s inaugural 2011 campaign, Knight led the Tigers to the Great American Conference championship, Ouachita’s first conference title in over 25 years. The Tigers claimed the conference crown again in 2014, 2017, 2018 and 2019. Knight was named GAC Coach of the Year in all five championship seasons. He  was also named Region three Coach of the year in 2014, 2018 and 2019.

Knight boasts five Great American Conference Championships and 132 All-Great American Conference players in just nine years. The Ouachita football program is the only college football program in the state of Arkansas with twelve consecutive winning seasons, cracking the American Football Coaches Association (AFCA) Top 25 in ten of those twelve seasons. Prior to Ouachita Baptist, Knight spent time at Delta State and UTEP. Knight was named to the AFCA Board of Trustees following the conclusion of the 2012 football season, adding to his list of accolades. He has also served on the NCAA Rules Committee.