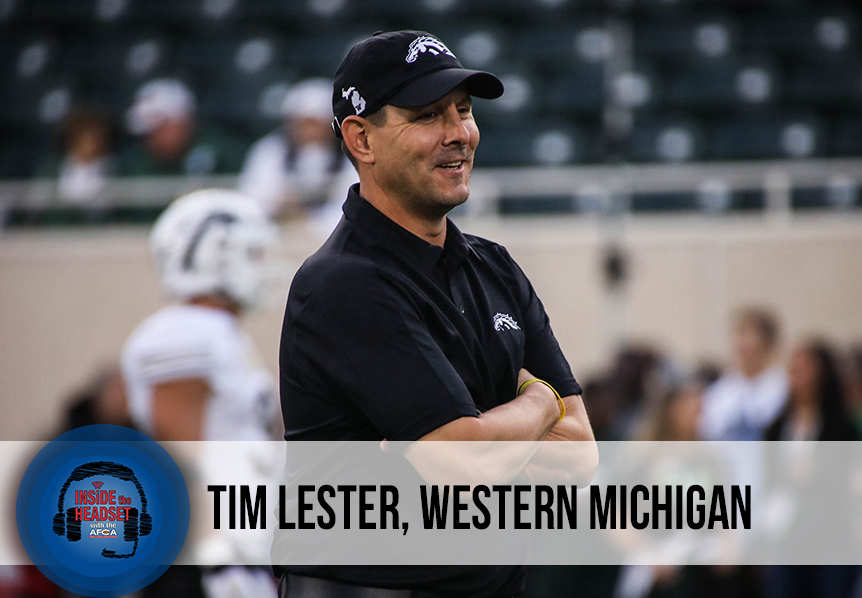 This week on Inside the Headset, we are featuring Western Michigan’s Head Coach, Tim Lester. In this episode, Coach Lester shares his personal experience coaching at his alma mater, highlights how he seeks out young coaching talent in college football, and details what it’s like preparing for weekday games in the Mid-American Conference.

Tim Lester is entering his sixth season as the head coach at Western Michigan. Lester has risen through the coaching ranks after completing a Hall of Fame playing career at Western Michigan. He was a four-year starter at quarterback at WMU from 1996-99, leading the Broncos to a Mid-American Conference championship appearance his senior season. In five years leading the Broncos, Lester has led the team to four winning seasons and three bowl appearances. In addition to the teams on-field success, Lester has coached 69 Academic All-MAC selections which ranks second most in the league during his tenure. Lester also made a stop as an assistant coach at his alma mater during the 2005 and 2006 seasons.

Prior to taking the head coaching position at Western Michigan Lester was the quarterbacks coach at Purdue in 2016, mentoring sophomore signal-caller David Blough to 25 touchdown passes and 3,352 yards, averaging more than 279 yards passing per game. Lester served as Syracuse’s quarterbacks coach from 2013 to 2015 and doubled as offensive coordinator in 2014 and 2015. Prior to working at Syracuse, Lester was the head coach at Division III Elmhurst (Illinois) College from 2008 to 2012. Over five seasons, he posted a 33-19 record for a .635 winning percentage, second highest in school history. In his final season in 2012, he led the Bluejays to a 10-2 record and a College Conference of Illinois and Wisconsin (CCIW) championship as well as Elmhurst’s first NCAA playoff appearance. Lester was named the CCIW Coach of the Year that season. Lester also served as an assistant at North Central College (2007) and Elmhurst (2002-03). He was the head coach at Division II Saint Joseph’s College in 2004, receiving Independent Football Alliance Coach of the Year honors.