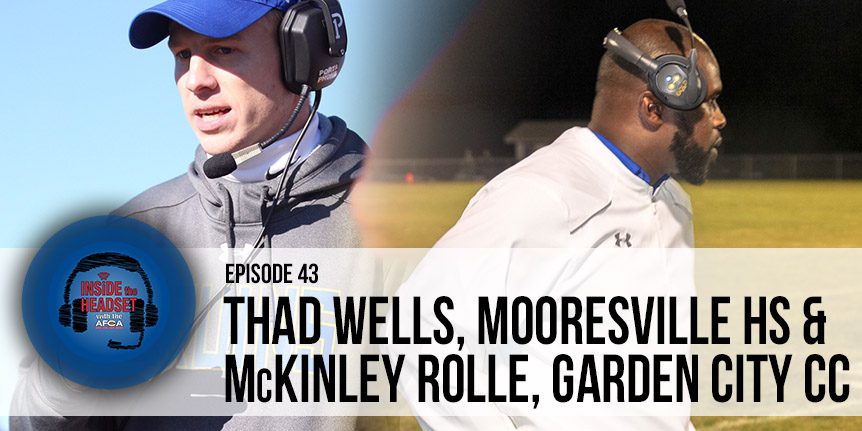 On this episode of Inside the Headset, we speak with Thad Wells, Mooresville (N.C.) HS head coach, and McKinley Rolle, linebackers coach for Garden City (Kan.) Community College. In the first segment with Coach Thad Wells, we discuss the importance of creating morning routines, how he incorporates new ideas into his coaching philosophy, and preparing players for life. In our second segment with Coach Rolle, we cover his time at Wildwood (Fla.) Middle High School, where he led a remarkable turnaround for the program in 2017.

Coach Thad Wells’ career began in 2007 as a middle school coach in Virginia. He went to Radford (Va.) HS as an assistant coach (2008-2009) prior to joining the staff at Richlands (Va.) HS for the 2010 season. He returned to Radford for the 2011 season before being named the offensive coordinator for Richlands in 2012. After spending the 2013 season as the offensive coordinator for Virginia (Va.) HS, Wells landed his first head coaching position at Colleton Prep Academy in South Carolina (2014). In 2015, he became the head coach at Blacksburg (Va.) HS, where he led his team to a state championship in 2016. This offseason, Coach Wells was named head coach of Mooresville HS.

Coach Rolle began his career as the head coach of Lacanto HS in Florida (2011-2013). He joined the staff at Ocala Trinity Catholic (Fla.) HS as an assistant for the 2014 season before moving to Lake Minneola (Fla.) HS in 2015. Rolle then accepted a position at Umatilla (Fla.) HS as the assistant head coach and defensive coordinator for the 2016 season. In 2017, he was named head coach for Wildwood Middle High School, and he led a remarkable turnaround – a 9-0 regular season and playoff berth. This past offseason, Rolle accepted a position coaching linebackers for Garden City Community College.