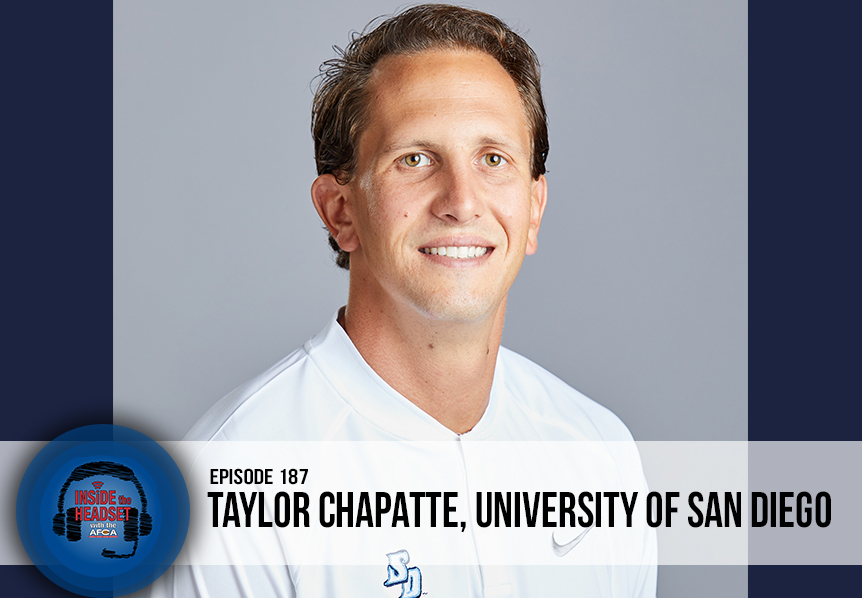 This week on Inside the Headset, we are featuring San Diego’s Passing Game Coordinator and Quarterbacks Coach, Taylor Chapatte. Chapatte discusses how to build a winning culture, highlights the unique differences of coaching at the FCS and Division III level, and shares his personal involvement with the AFCA.

Taylor Chapatte is entering his fourth season with San Diego and second as the passing game coordinator/quarterbacks coach. In his first two years, he was the wide receivers coach. Chapatte joined USD after spending three seasons at the University of Puget Sound, where he coached the wide receivers (2015-16), quarterbacks (2017) and served as the recruiting coordinator for all three years from 2015-17. In addition to his recruiting and position responsibilities, he was the play caller and pass game coordinator in 2016 and 2017. He played a key role in helping lead the team to its most conference wins in school history during 2015.

Prior to his stop at Puget Sound, Chapatte was at the University of Redlands for three years (August 2012-December 2014) as the wide receivers coach, co-special teams coordinator and video coordinator.