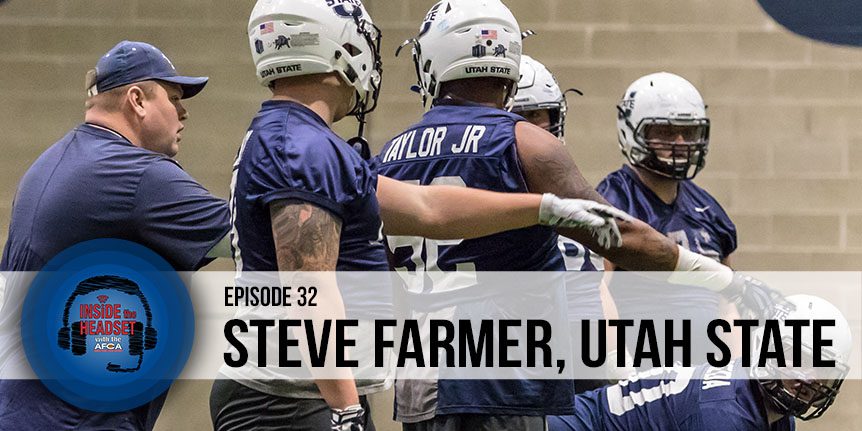 On this episode of Inside the Headset, we are joined by Steve Farmer, offensive line coach for Utah State University. Coach Farmer details the way he approaches organization and game-planning as he talks through each day of a typical game week.

Coach Farmer’s career began at Illinois State in 1999, where he worked with the defensive tackles in his first season before switching to tight ends in 2000. Farmer went on to coach the offensive line for Eastern Illinois (2001-2002) and Eastern Michigan (2003) before joining the staff at Louisiana-Monroe (2004-2008). He became the offensive coordinator towards the end of his time at ULM, then took the same position at Illinois State in 2009, before returning to ULM as the offensive coordinator from 2010-2015. Farmer joined Utah State for the 2016 season.

In our second segment, we are joined by the AFCA’s Coordinator of Foundation and Special Events Genee Ordones to discuss our upcoming AFCF® CEO Coach of the Year® dinner. In an effort to bring recognition to the outstanding qualities of leadership found in America’s corporate world, the American Football Coaches Foundation® Board of Directors created the CEO Coach of the Year Award in 2006. The award honors a corporate CEO who best exemplifies the outstanding leadership qualities also found in the greatest coaches in the game of football. This is the highest honor bestowed by the AFCF. This year’s recipient is Tom Fanning, Chairman, President, and CEO of Southern Company.