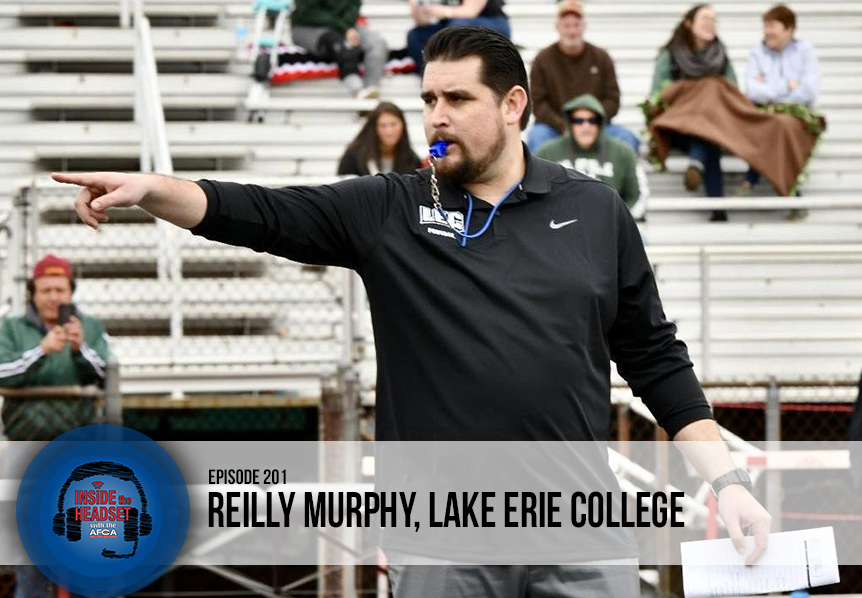 This week on Inside the Headset, we are featuring Lake Erie College Head Coach, Reilly Murphy. Coach Murphy discusses his different experiences coaching at various collegiate levels, provides insight on how to turn a struggling program around, and highlights the culture of accountability he has created within his team.

Reilly Murphy is entering his third season as the Head Football Coach at Lake Erie College.  Murphy came to Lake Erie College after serving as the offensive coordinator for fellow Division II member Fayetteville State University. While leading the offensive side of the ball, the Broncos ranked among the top offenses in the country with an average of 32.33 points per game while rushing for 216 yards per contest, 26th in Division II. Fayetteville State was also in contention for the NCAA playoffs.

Murphy’s coaching career is diverse as he has coordinated offenses at private, public, and historically black colleges and universities. He has previously served as the offensive coordinator of Dixie State University. Before that he was the assistant head coach and offensive coordinator at Western New Mexico University. Murphy has also coached at Bethel College, Notre Dame College, and Grossmont College. During his collegiate career, Murphy attended Grossmont where he played quarterback and led the Griffins to a national championship in 2005. He was an Academic All-American and was honored with the Joe Roth Memorial Award given annually to a California Junior College football player who best exemplifies characteristics of leadership, humility, and class. He was then granted a scholarship to play at Indiana State where he was a two-year starter and named the Gateway Conference’s Newcomer of the Year in 2006.