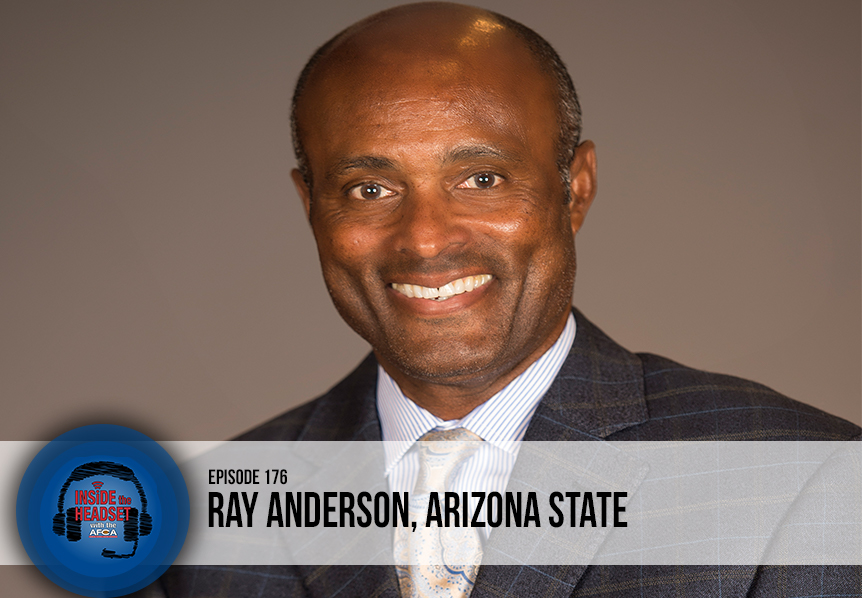 This week on Inside the Headset, we are featuring Arizona State’s Vice President for University Athletics and Athletic Director Ray Anderson. In his session from the 2021 AFCA Virtual Clinic, Ray Anderson highlights some intricacies of the hiring process, shares his requirements for selecting the best applicant, and discusses the significance of loyalty in the coaching profession.

Ray Anderson was named Arizona State University’s Vice President for University Athletics and Athletics Director in 2014. Highly influential in the world of collegiate athletics, Anderson is a board member of the National Football Foundation’s College Football Hall of Fame, Pac-12 Athletic Director Chairman, a member of the ITA Board of Directors, on ASU’s Advisory Council, as well as the ASU Sports Law & Business Program’s Board of Directors. In recent years, Anderson was also a member of the NCAA Football Oversight Committee, Chair of the new Ad Hoc NCAA Football Competition Committee, and the Green Sports Alliance Advisory Board.

Prior to taking the helm at ASU, Anderson was making his impact felt with the NFL as executive vice president of football operations since August 2006, and previously as the executive vice president and chief administrative officer of the Atlanta Falcons for four years. During the week of Super Bowl XLIX in 2015, he was presented with both the Paul J. Tagliabue Award and John Wooten Lifetime Achievement Award for his outstanding leadership with a desire to improving his community.