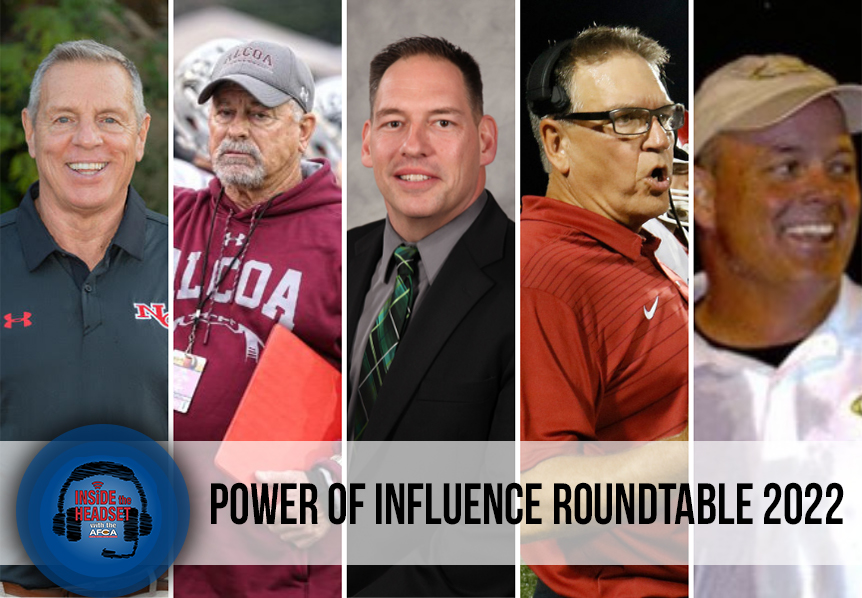 Lou Marinelli has been the head coach for the New Canaan Rams for 40 seasons and has a record of 349-103-6. If you include his other stops at Mamaroneck (N.Y.) High School and Yorktown (N.Y.) High School, his overall record stands at 368-110-7. After lettering in football at Springfield College, Marinelli began his coaching career at Mamaroneck in 1976. He moved to Boston College as an assistant coach for two years before returning to the high school ranks in 1979 at Yorktown. After two seasons, Marinelli began his New Canaan run in 1981. After going 4-5 in his first season, he brought the Rams the first of 12 state titles in 1982. New Canaan’s other state titles came in 1993, 2001-02, 2006-09, and 2013-16. The winningest head coach in Connecticut high school football history, Marinelli’s trophy case is full of awards that he has won over the years, including the Fairfield County Interscholastic Athletic Conference (FCIAC) Coach of the Year several times, National Football Foundation Coach of the Year, Walter Camp Football Foundation’s Connecticut Coach of the Year, Connecticut High School Coaches Association Coach of the Year, the Legendary Coach Award by MSG Network, and National Football League Coach of the Year in 2008, to name a few. Marinelli has been inducted into the Connecticut High School Hall of Fame, FCIAC Hall of Fame, Fairfield County Sports Hall of Fame, and the Springfield College Athletic Hall of Fame.

Gary Rankin recently completed his 16th and final season as the head coach at Alcoa High School where he led the Tornadoes to 13 state titles. Coach Rankin was named the head coach of Boyd Buchanan High school in February 2022. Rankin began his coaching career at Warren County (Tenn.) High School as an assistant coach. In 1982, he earned his first head coaching position at Smith County (Tenn.) High School and won 58 games in his eight years as a head coach. Rankin then spent 16 years as the head coach at Riverdale (Tenn.) High School, where he won four state championships and finished with a record of 194-25.  In his 40 years as a head coach, he is Tennessee High School’s all-time wins leader with a record of 468-78. Rankin also has 16 state championships, which is a Tennessee Secondary School Athletic Association (TSSAA) record. Since Rankin has coached at Alcoa, the team has been to the state championship game all but two years. He has added a long list of accolades, including Knox News Lifetime Achievement Award, coached 13 Tennessee Mr. Football Award winners, one Gatorade Player of the Year, East Tennessee CAREacter Star Coach of the Year award, 2009 Tennessee Titans Coach of the Week, and countless other Coach of the Year awards. Rankin was inducted into the TSSAA Hall of Fame in 2011.

Jake Gilbert, who earned his second straight AFCA Power of Influence Regional honor, completed his 11th season as head coach at Westfield High School by leading the Rocks to a 12-2 record and a second straight appearance in the Indiana High School 6A state championship game. That was Westfield’s fourth appearance in the state championship game under Gilbert. In 2016, he guided Westfield to the school’s first-ever state championship. Gilbert has won several Coach of the Year honors including Indiana Football Coaches Association Coach of the Year in 2013 and 2016 and Fellowship of Christian Athletes (FCA) Indiana Coach of the Year in 2017. He has been an FCA sponsor since 2012 and created a Freshman Mentor Program and Life Ready Initiative at Westfield. Gilbert has hosted Special Olympic football clinics, raised money to tackle childhood cancer, led a mission trip to Haiti, and helps support the Indiana Blood Center. He also serves on the Westfield City Council and is president of the Wellbeing Coalition of Westfield.

Bill Blankenship joins Coach Gilbert as a two-time Regional POI winner. He finished his fifth season at Owasso High School by leading the Rams to an 8-4 overall record and an appearance in the Class 6A playoffs. Since arriving in 2017 as head coach, Blankenship has led Owasso to two state championships and two semi-final appearances. Prior to Owasso, Blankenship was the head coach at Fayetteville (Ark.) High School in 2016, guiding the Bulldogs to a Class 7A state title with a 12-1 record. He spent nine years as a college coach at Tulsa and Memphis. From 2011-2014, he was the head coach at Tulsa, leading the Golden Hurricanes to two bowl games and a Conference USA title in 2012. Blankenship earned his Oklahoma Coaches Association Hall of Fame induction for what he achieved at Union High School in Tulsa. In his 14 seasons as head coach, Union won 154 games, made seven state championship game appearances, and won the 6A state championship three times. Blankenship is very involved with the Oklahoma Coaches Association Board and Oklahoma Football Coaches Association and has served on the Board of Directors for the Oklahoma Fellowship of Christian Athletes. He currently serves on the Board of Directors for Coaches Outreach, based in Dallas, Texas.

Tim Brennan makes it three back-to-back winners of the AFCA Regional Power of Influence Award. He has racked up on overall record of 240-84 in his 31 years as a head coach, with the last 26 coming at Bishop Kelly High School in Boise, Idaho. He has led the Knights to six state championships, 11 league championships and four undefeated seasons. Brennan has won numerous awards over his career including six Idaho State Coach of the Year honors and the Hugh Brady Award in 2018 for outstanding service and dedication to the Idaho State Coaches Association and the youth of Idaho. He was recently honored with the 2021 National Double-Goal Award, given by the Positive Coaching Alliance, being one of 25 High School or Youth Coaches honored in the nation. Brennan has served as vice president and president of the Idaho State Coaches Association and has been a board member of the Idaho Third District Coaches Association for 33 years.