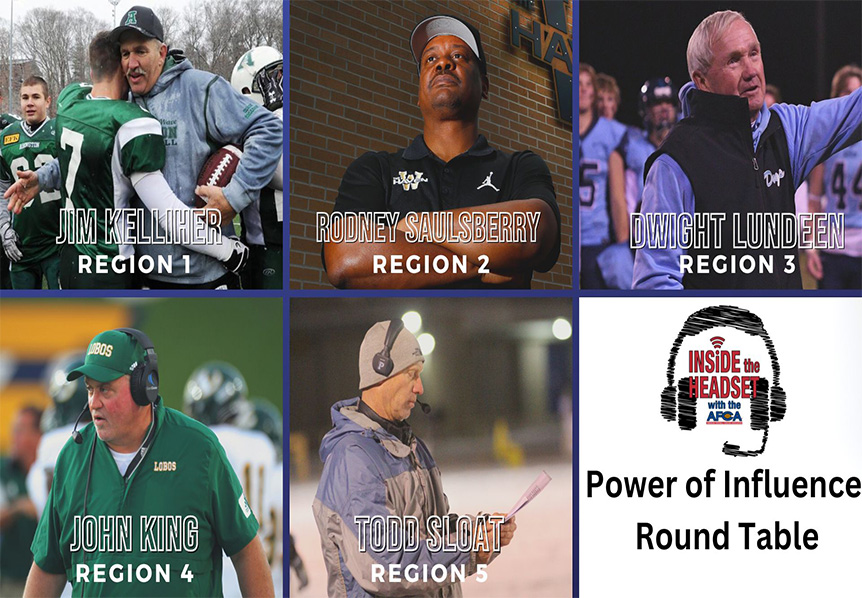 This week on Inside the Headset, we are featuring our 2022 Regional Power of Influence Award winners in a roundtable discussion. The coaches discuss their journey, some of the mentors who have had an impact upon them, and some pillars of their football program.

Jim Kelliher has been the head coach at Abington High School for 49 years and currently sits fourth for career victories in Massachusetts history with 305. He has guided the Green Wave to three Eastern Massachusetts State titles in Division 5 (2002), Division 3 (2005) and Division 4 (2012) and two overall state championships in Division 5 (2014) and Division 4 (2019). Kelliher graduated from Abington in 1966 and played his college football at the University of Massachusetts. He returned to Abington as an assistant coach for three years before being named head coach in 1974.

Rodney Saulsberry Sr. is in his 25th season at Whitehaven High School and 19th as a head coach. He has an overall record of 180-48 with two Tennessee 6A state titles in 2012 and 2016, the first championships in program history. Over 200 of Saulsberry’s former players have gone on to play college football, and 15 of them have become coaches. He has served on the board of the Tennessee Football Coaches Association and served on the Rules Committee for the Tennessee Secondary School Athletic Association. Saulsberry has been a speaker at various football clinics around the country, including the 2013 AFCA Convention. In 2020, he co-founded the Minority Coaches Association of Tennessee, which helps high school, college and professional coaches in Tennessee foster job opportunities and hosts clinics for continuing education. Saulsberry has earned many awards over his time as head coach, such as a two-time Tennessee Titans Coach of the Week, a Tennessee Titans/Shelby Metro Coach of the Year award winner in 2012 and 2016, three-time Regional Coach of the Year and winner of the Rex Dockery Award from the Memphis Chapter of the National Football Foundation and College Hall of Fame.

John King is in his 19th year as head coach at Longview High School. He currently has the Lobos in the semifinals of the Texas 5A state playoffs with a 14-0 record. His overall record sits at 211-43 with a 6A state championship in 2018. King is a past president of the Texas High School Coaches Association and has served on the THSCA Board of Directors. He has served on several committees for the THSCA as well as Treasurer of the East Texas Coaches Association. King was inducted into the East Texas Coaches Association Hall of Honor in 2019 and was named Texas Sportswriter Association 6A Coach of the Year, along with Longview News Journal and American State Bank Coach of the Year in 2018. He has won 15 District Coach of the Year honors in his 19 seasons.

Todd Sloat has been coaching football for 23 years, with the last 21 coming at Fall River High School. His overall record in eight years as a head coach sits at 78-16 with one California 7AA state championship and six Northern Section titles. Sloat earned California Coach of the Year honors in 2021 and six other Coach of the Year honors in 2006, 2007, 2008, 2017, 2018 and 2021. He stepped down as head coach after the 2021 season and works as assistant coach with Fall River, helping the Bulldogs to a 12-0 record and the Northern Section championship.

0:50 Meaning of Power of Influence Selection

18:05 Creating a Community within Your Town & Team