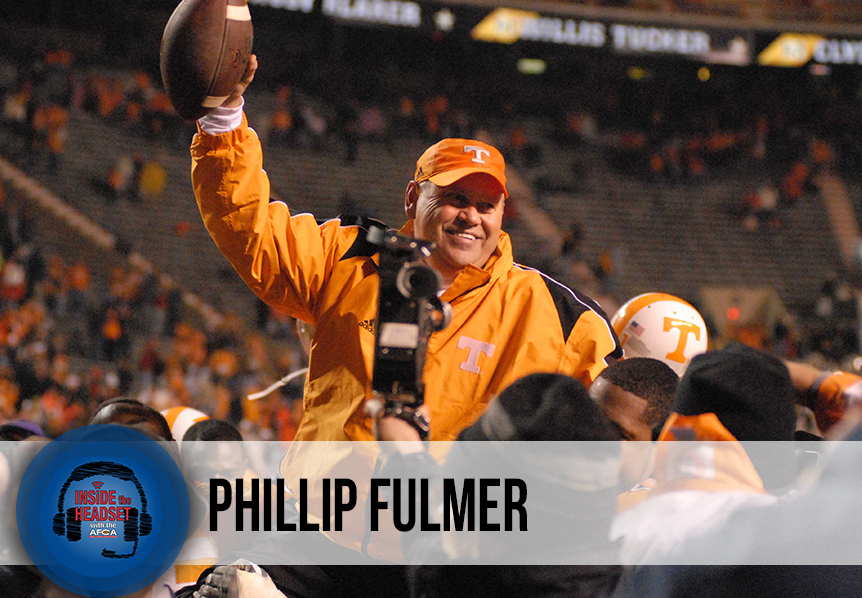 This week on Inside the Headset, we are featuring College Football Hall of Fame Head Coach, Phillip Fulmer. Coach Fulmer reflects on his legendary career at the University of Tennessee, discusses why it is important to embrace change and shares advice for young coaches attending the AFCA Convention.

Phillip Fulmer is a former longtime Head Coach of the Tennessee Volunteers (1992-2008). The winner of the 1998 AFCA National Coach of the Year, Phillip Fulmer achieved 137 wins in his first 15 campaigns, tying for the fourth-most in a 15-year span in college football history. Fulmer owned two SEC championships, a piece of seven SEC East Division titles, an impressive 5-0 record when playing the nation’s No. 1-ranked team, an 88-19 home record, and nine ten-win seasons. Fulmer’s teams appeared in two BCS games, winning the first national title in the school’s history with a victory over Florida State in the 1999 Fiesta Bowl. Nineteen players earned first-team All-America honors under Fulmer, and 70 Volunteers were named first-team All-SEC during his tenure.

Prior to taking over as the head coach of the Volunteers, Fulmer worked as the offensive line coach and offensive coordinator with Tennessee from 1980-1992. After Fulmer retired from the game of football in 2008, he came back to Tennessee in 2017 to serve as the Athletic Director for five years. A member of the board of directors for Alzheimer’s Tennessee, Inc., Fulmer is active with the Boys and Girls Club, Team Focus, and Child and Family Services.