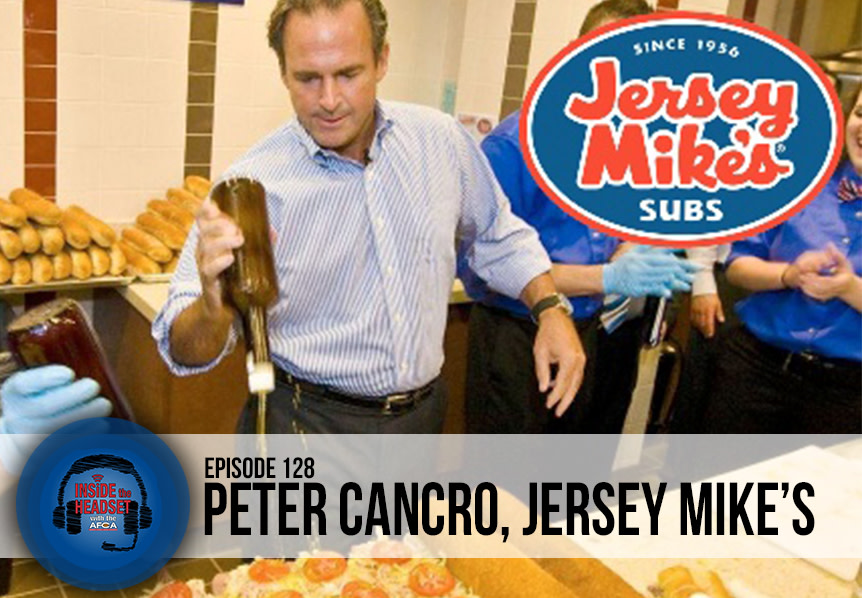 This week on Inside the Headset, we are featuring Jersey Mike’s Subs co-founder and CEO, Peter Cancro. Cancro discusses how his youth football coach helped him buy his first sub shop, the similarities between football and business, as well as the importance of giving back and impacting others.

In 1971, Peter Cancro was a high school student in Point Pleasant, New Jersey. He began working at Mike’s Subs at the age of 14.  When Peter was a senior in high school, he overheard the owner of Mike’s Subs discussing selling the business. As an ambitious 17-year-old kid, Peter approached his football coach, who was also a banker, and asked if he could help him buy the shop. His football coach, Rod Smith came through for Peter and backed his loan. At the tender age of 17 – before he was legally able to slice a sub – Peter Cancro became the owner and proprietor of Mike’s Subs.

Shortly after buying Mike’s, he opened more local outlets and expanded upon the phenomenon of Mike’s Subs. In the mid-eighties, Peter began to realize people would come in at the end of ‘summering’ in Jersey and get several giant subs wrapped for travel, to carry back to their homes across the country. This got Peter thinking, and he started researching the possibilities of franchising. In 1987, 29-year-old Peter began franchising, however, he changed the name from Mike’s Subs to Jersey Mike’s Subs capturing the authenticity of where the sub sandwich was born.

Today, in his 45th year owning the business, Cancro oversees more than 2,000 locations. Despite the title, Peter still jumps behind the counter to demonstrate his passion for the product and the customer.