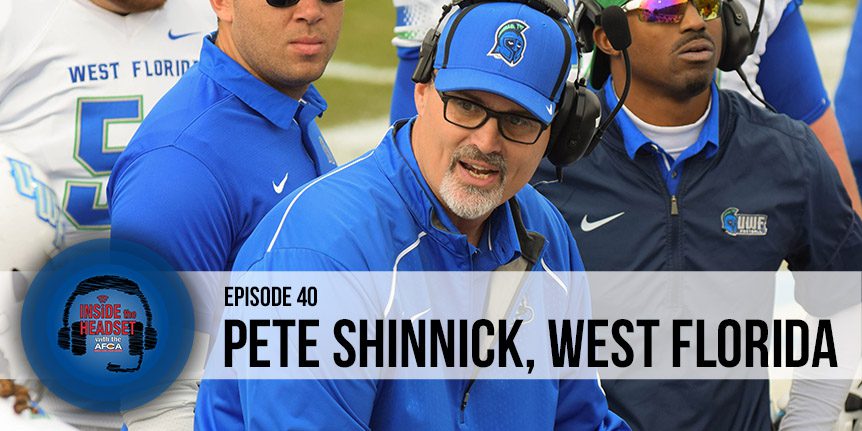 On this episode of Inside the Headset, we are joined by Pete Shinnick, head football coach at the University of West Florida, to discuss building a football program from scratch, creating a culture with a “PG” mentality, and growing up on an NFL sideline.

Coach Shinnick got his start in coaching working with the offensive line at Richmond in 1988. He then served as a graduate assistant for Arkansas (1989) and Clemson (1990-1991) before becoming the recruiting coordinator for Oregon State (1992-1993). Shinnick coached the offensive line at Northern Michigan (1994), served as the offensive coordinator for St. Cloud State (1995-1997), and coached offensive line for Humboldt State (1998) prior to becoming a first-time head coach at Azusa Pacific (1999-2005). In 2005, Shinnick helped to resurrect the football program at UNC-Pembroke, which had been discontinued in the 1950s, and led them to a playoff appearance in his third season. Coach Shinnick accepted the top spot at West Florida in 2014 to build the program prior to their inaugural season in 2016. He led the Argos to a National Championship appearance in the 2017 season.

After assistant coaches broke down Argo Jacks for a few weeks, @PeteShinnick took the for the most #Arete start to practice of the year! pic.twitter.com/du1MGevgn2