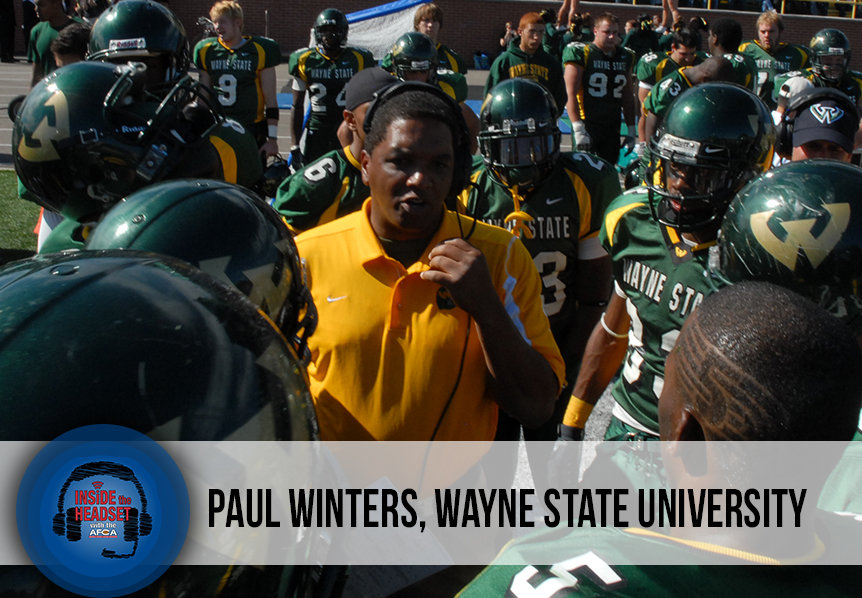 This week on Inside the Headset, we are featuring Wayne State University Head Coach, Paul Winters. In this episode, Coach Winters highlights the various factors that go into selecting a coaching job, shares his thoughts on the evolving nature of college football, and details his personal involvement with the AFCA.

Paul Winters is entering his 19th season as the Wayne State University head football coach this upcoming football season. Winters is the school leader in coaching victories with 93 and is a three-time GLIAC Coach of the Year award winner (2006, 2008 and 2019). His 2011 squad set the school record for overall wins (12) and road wins (8), while winning four consecutive road playoff games to reach the national title contest. After guiding the winningest team in school history in 2011, he was honored for his efforts with the AFCA NCAA Division II National Coach of the Year award. Since 2004, Coach Winters has coached 197 All-GLIAC award winners as well as 515 Academic All-GLIAC honorees.

Prior to his appointment at WSU, Winters was the offensive coordinator and running backs coach at his alma mater the University of Akron (1995-2003). After the 2000 season, and for the second time, Winters was nominated for the Broyles Award, a national honor recognizing the nation’s top Division I-A assistant coach. In addition, he was chosen as the Assistant Coach of the Year by the Northeastern Ohio Chapter of the National Football Foundation from among 13 universities and colleges in the region. Before returning to Akron following the 1994 campaign, Winters was an assistant football coach at the University of Wisconsin for two seasons (1990-91). Prior to UW, he was on the coaching staff at the University of Toledo for four seasons (1986-89). A former member of the AFCA Division II Board of Coaches, Winters served on the NCAA Regional Ranking Committee as well as the NCAA Rules Committee.  Winters is entering his fifth year on the AFCA Board of Trustees after being selected in January of 2017.