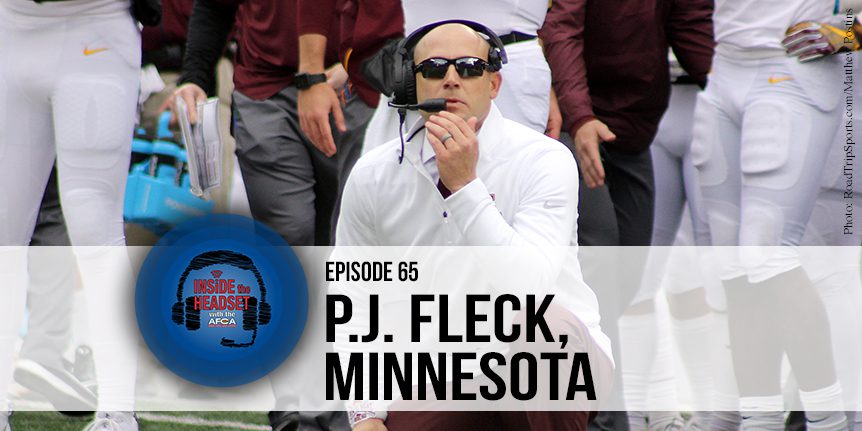 This week on Inside the Headset, we are featuring P.J. Fleck’s General Session from the 2017 AFCA Convention in Nashville. Addressing the audience shortly after accepting the head coaching position at the University of Minnesota, Coach Fleck shared his coaching philosophy and the importance of developing a strong program culture, as well as explaining the meaning behind the “Row the Boat” mantra.

Coach Fleck’s career began as a graduate assistant for Ohio State in 2006, where he worked with the tight ends and the special teams. From there, he was hired to a full-time position at Northern Illinois, his alma mater, coaching the wide receivers (2007-2009) and serving as the recruiting coordinator. Fleck went on to coach the receivers at Rutgers (2010-2011) before moving to the NFL and coaching the wideouts for the Tampa Bay Buccaneers (2012). In 2013, he accepted the head coaching position at Western Michigan. After going 1-11 in his first season leading the Broncos, the team went 13-0 before losing to Wisconsin in the Cotton Bowl in the 2016 season. Fleck was named head coach of the Minnesota Golden Gophers prior to the 2017 season.