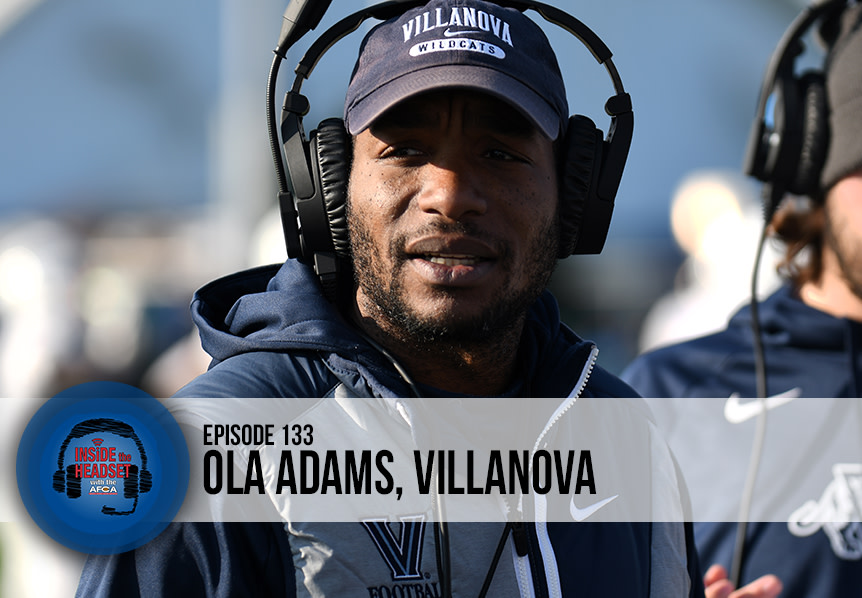 This week on Inside the Headset we are featuring Villanova University Defensive Coordinator, Ola Adams. Coach Adams discusses the importance of being flexible as a coach, his favorite defensive schemes, as well as the significance of pursuing career development opportunities.

Ola Adams began his fifth year with the Wildcats in 2019, and his first as the team’s Defensive Coordinator. After working with the Wildcat running backs his first two years, Adams was the program’s Special Teams Coordinator and cornerbacks coach the past two years. Adams came to Villanova from Columbia University where he was the wide receivers coach in 2014. Prior to his year at Columbia, Adams was the Assistant Head Coach and Defensive Coordinator at Cortland State (2011-2013). During his three years at Cortland, the Red Dragons tallied a 24-9 overall record and earned an NCAA playoff bid in 2012. In three seasons, his defense ranked top 33 nationally in 17 separate categories. Prior to spending one season (2010) as the secondary coach at Glenville State College, Adams had his first stint at Cortland as the defensive backs coach in 2009. He began his coaching career as the assistant defensive backs coach at Concord University in 2008.