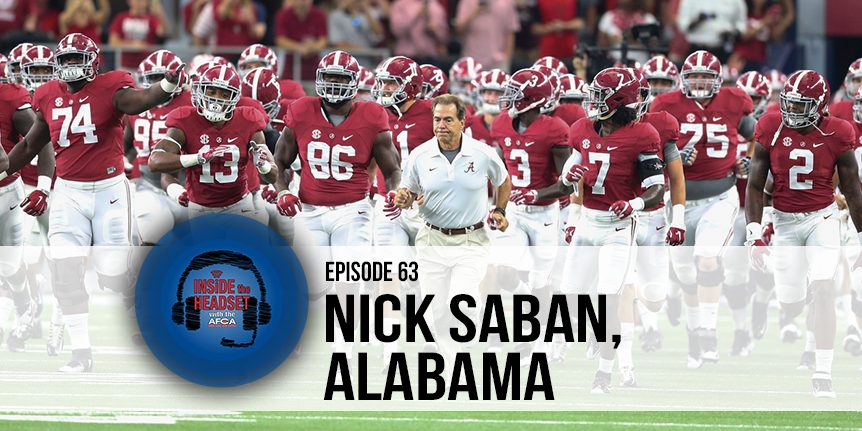 Starting this week on Inside the Headset, through the month of December, we will feature a speech from past conventions starting with Nick Saban from the 2014 AFCA Convention in Indianapolis. Coach Saban delivered a passionate speech about coaching today’s athletes and pulled back the curtain on his program at Alabama.

Coach Saban’s career began as a graduate assistant at Kent State (1973-1974) before he was brought on full-time to work with the linebackers (1975-1976). From there, he coached outside linebackers at Syracuse (1977), then defensive backs at West Virginia (1978-1979), Ohio State (1980-1981), and Navy (1982). Coach Nick Saban was the defensive coordinator and coached defensive backs at Michigan State (1983-1987) before heading to the pros. During his first stint in the NFL, he coached defensive backs for the Houston Oilers (1988-1989). In 1990, Coach Nick Saban accepted his first head coaching position at Toledo. He returned to the NFL to serve as the defensive coordinator for the Cleveland Browns under Bill Belichick (1991-1994). Coach Nick Saban rejoined the Michigan State program in 1995, this time in the top spot, where he remained until accepting the head coaching position at LSU in 2000. While at LSU, he led the Tigers to a pair of SEC championships and the 2003 national championship. He left LSU to lead the Miami Dolphins for two seasons (2005-2006) before returning to the college ranks to take over the Alabama program in 2007. Since then, Coach Nick Saban has led the Crimson Tide to five national championships (2009, 2011, 2012, 2015, 2017). He and his wife Terry are the co-founders of Nick’s Kids, a non-profit dedicated to raising awareness and resources for deserving organizations throughout the state of Alabama and the Southeast.