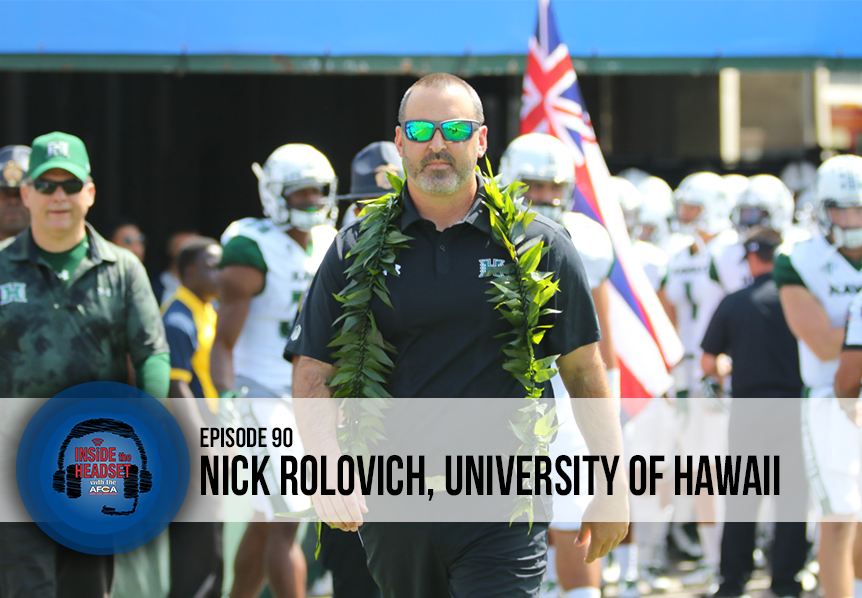 This week on Inside the Headset we speak with Nick Rolovich, Head Coach for the University of Hawaii. We discuss his coaching philosophy, bringing the run-and-shoot offense back to the Rainbow Warriors, and the unique mindset he and his staff use to prepare their players for travel.

Coach Rolovich’s career began while he was still playing professional football. After graduating from Hawaii, he had experiences in NFL mini-camps, NFL Europe, and the Arena Football League over the next seven years. In NFL Europe’s offseason in 2002, he served as an assistant coach at San Marin HS (CA), and he later was a student assistant at Hawaii in 2003 and 2004. His first full-time position was working as the quarterbacks coach at City College of San Francisco (2006-2007), the same JUCO where he played quarterback. Coach Rolovich returned to Hawaii in 2008 as the quarterbacks coach and was promoted to offensive coordinator in 2010. From there, he joined Nevada’s staff as the offensive coordinator and quarterbacks coach (2012-2015). In 2016, Rolovich was named Head Coach at Hawaii.