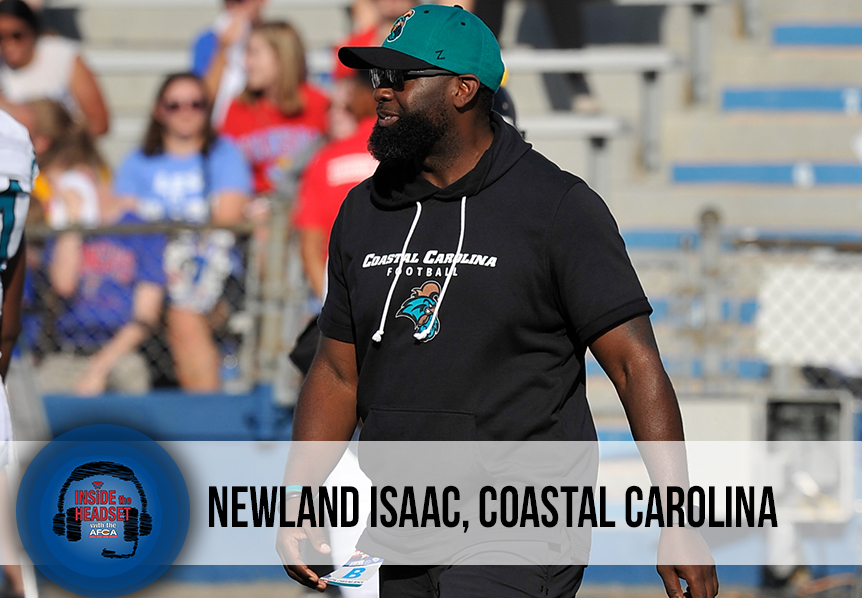 This week on Inside the Headset, we are featuring Coastal Carolina’s Co-Offensive Coordinator and Running Backs Coach, Newland Isaac. In this episode Coach Isaac takes us through his personal coaching journey, shares how to build a team culture that goes beyond the field, and dives into his personal offensive philosophy.

Newland Isaac recently completed his 13th year as a college coach with the last four coming at Coastal Carolina. Coach Isaac led the Chanticleers’ to the No. 7 scoring (40.4 ppg), No. 6 rushing (231.3 ypg), and No. 6 total offense (493.1 ypg) in the country in 2021. The Chanticleers ended the 2021 season with a win over Northern Illinois in the Cure Bowl. This success helped Isaac earn the AFCA 2021 FBS Assistant Coach of the Year award.  In 2020, Coach Isaac lead the Chanticleers to a Sun Belt Conference Title on the way to an 11-1 overall record. Prior to Coastal, Isaac spent the 2017 season as the assistant head coach and offensive coordinator at Albany State where he helped the Golden Rams finish first in the SIAC in scoring, passing offense, and red-zone offense while ranking second in both rushing and total offense.

Prior to his time at Albany, Isaac worked on coach Chadwell’s staff at his alma mater Charleston Southern, serving as the running backs coach for four seasons. During his time there, Isaac helped the Buccaneers produce one of the nation’s top rushing attacks in his final two seasons at CSU. The Bucs won Big South championships in 2015 and 2016 while also earning NCAA playoff berths each season. Off the field Coach Isaac is very involved in the community. Isaac leads a group of selected student-athletes who read, mentor, and discuss important life matters to children at a local elementary school, volunteers with FCA, Tim Tebow’s “Night to Shine” Prom, Caring for Kindergartners, Black History Month program, pumpkin drives, and Christmas events. Isaac was also selected to participate in the 2018 NCAA-NFL Coaches Academy.