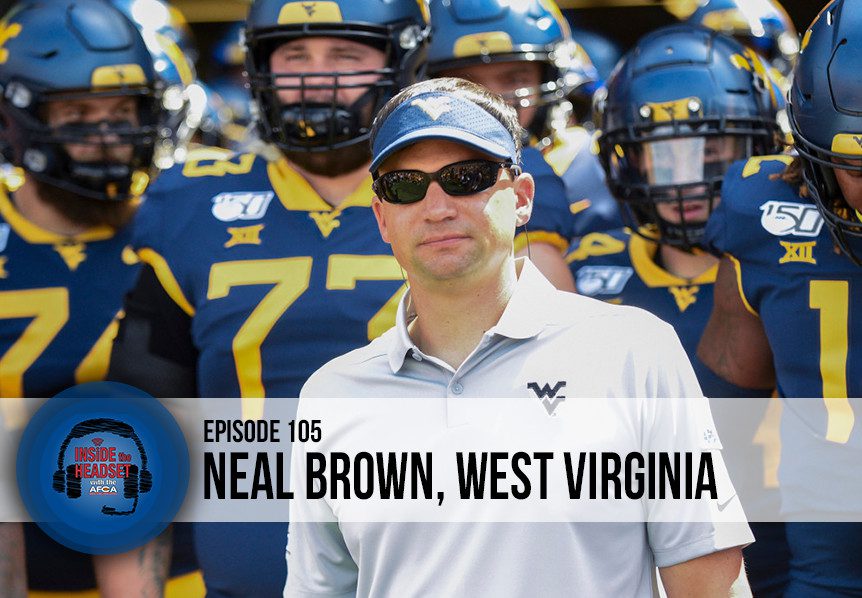 This week on Inside the Headset we speak with Neal Brown, Head Coach for West Virginia University, and in the second segment, we’re joined by Reggie Bush, college football analyst for FOX Sports. With Coach Brown, we discuss the process of turning around the Troy football program, as well as the importance of creating a family atmosphere with a team. Later, with Reggie Bush, we discuss the impact his coaches had on his career, and a story from the 2006 BCS National Championship.

Coach Brown’s career began as a tight ends and assistant offensive line coach at the University of Massachusetts (2003). He went on to coach the quarterbacks and receivers at Sacred Heart (2004), and the receivers at Delaware (2005), before joining the staff at Troy in 2006. After working with the receivers for two seasons, Brown was promoted to offensive coordinator in 2008 and also worked with the quarterbacks. In 2010, Coach Brown moved to Texas Tech where he was the offensive coordinator, and he was later the OC at Kentucky (2013-2014). In 2015, he returned to Troy–this time as head coach–and he led the program to 3 straight 10+ win seasons (2016-2018). Neal Brown was named Head Coach of the Mountaineers’ football program in 2019.

Reggie Bush currently serves as a college football studio analyst for FOX Sports and is a contributor to FS1 daily studio shows. Bush starred as a running back at USC (2003-2005), winning the Pac-10 Player of the Year award twice along with being a two-time consensus All-American (2004, 2005). After being selected with the second overall pick in the 2006 NFL Draft by the New Orleans Saints, he went on to play 11 seasons in the NFL for five teams (New Orleans Saints, Miami Dolphins, Detroit Lions, San Francisco 49ers, and Buffalo Bills). Away from the field, Bush impacts the community through the 619 Charitable Fund.