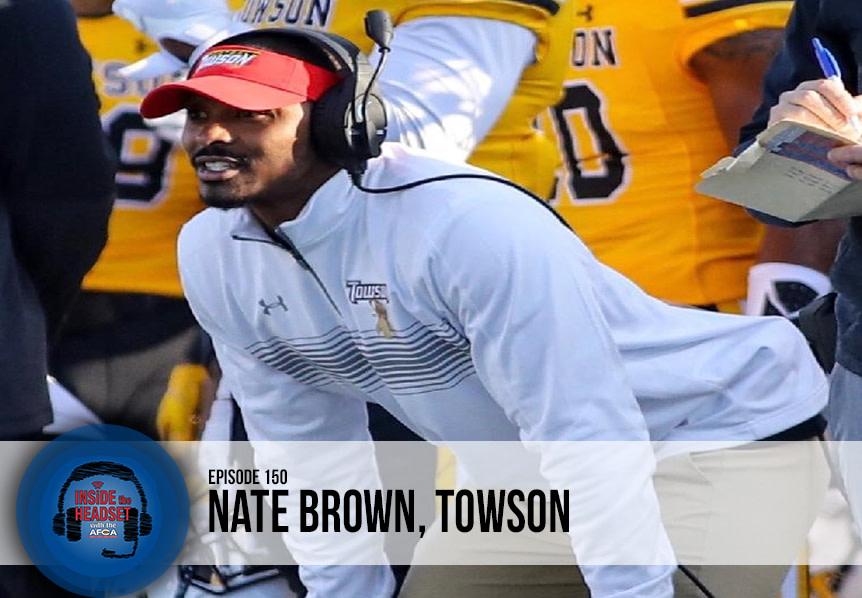 This week on Inside the Headset, we are featuring Towson University Cornerbacks Coach, Nate Brown. Coach Brown talks about coaching multiple positions, explains the importance of instilling confidence, and discusses the significance of developing genuine relationships.

Nate Brown enters his second season on the Towson football staff in 2020 as the cornerbacks coach. In 2019, the secondary helped Towson finish third in the CAA in scoring defense with 23.5 points allowed per game. Brown spent the previous three seasons at North Texas in the same role.  In 2018, UNT was tied for fifth in Division I with 18 interceptions, including at least four by three different Mean Green. The 2016 season saw UNT collect 14 interceptions, including nine from the cornerback corps, while also allowing 8.7 fewer points than the previous year.

Coach Brown was at Louisiana-Monroe is 2015. Prior to his return to ULM, he coached the 2014 season at Grambling State University. In 2013, Brown served at Millsaps College, where he coached three all-conference players, as the wide receivers coach, passing game coordinator, and punt return coordinator. Brown was at ULM, his alma mater, as a graduate assistant coach in 2012. As a player, Brown was a four-year letter winner in the secondary at Louisiana-Monroe, and was a Third Team All-Sun Belt defensive back, finishing his career with 150 tackles.