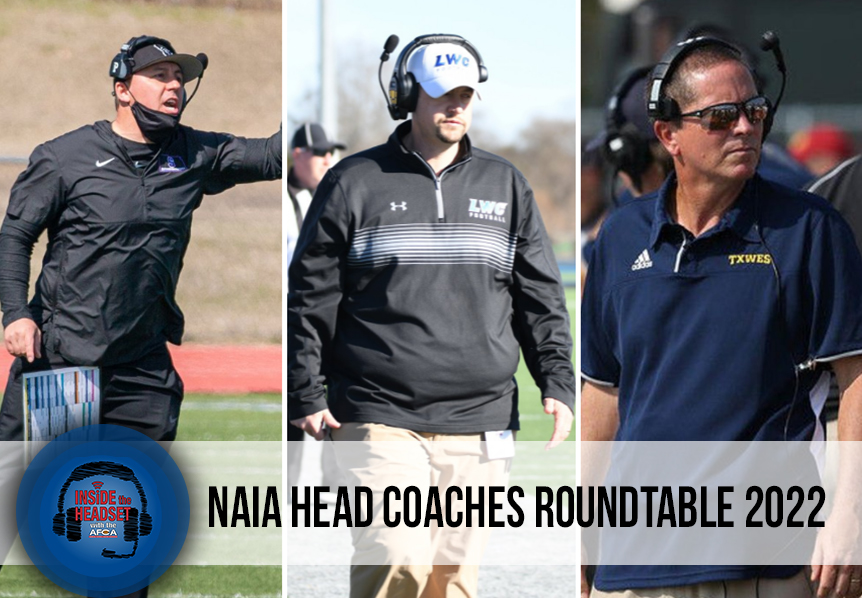 This week on Inside the Headset, we are featuring the 2021 AFCA NAIA Regional Coaches of the year. These coaches include Lindsey Wilson College Coach Chris Oliver, Southwestern College Coach Brad Griffin and Texas Wesleyan University Coach Joe Prud’homme.

Chris Oliver recently completed his 12th and final season as the head coach of the Blue Raider football program. This past spring Coach Oliver lead his team to an undefeated 11-0 record and took home the first NAIA National Championship in program history. Coach Oliver has been the head coach at Lindsey Wilson since the inception of the football program in 2010. Over the past eight seasons the Blue Raiders have made the playoffs seven times and have won multiple Mid-South Conference division titles under Coach Olivers direction. Prior to Lindsey Wilson, Oliver spent five seasons as an assistant coach at Ohio Dominican.

Brad Griffin will be entering his eighth season at the helm of the Southwestern Moundbuilders in 2022. This past season Coach Griffin led his team to a 9-2 overall record while winning a share of the KCAC Conference regular season title and earning an invite to the NAIA playoffs. During the 2020 season, Griffin led the Moundbuilders to their first national ranking since 1999. Prior to taking the reins at Southwestern, Griffin spent 11 seasons at William Penn University in Oskaloosa, Iowa where he served as the Defensive Coordinator while working with the Linebackers.

Joe Prud’homme is entering into his sixth season as head coach of Texas Wesleyan after being tasked with restarting the dormant program in February of 2016. The Rams returned to the gridiron in 2017 after a 76-year hiatus, and in 2018 Prud’homme led the program to its first on-field victory since 1945. The 2021 season saw the Rams complete their first winning season since starting up the program as they went 7-3 during the season. Prior to Texas Wesleyan, Prud’homme compiled an extremely successful coaching career over 27 seasons in the Texas High School ranks. He came to the Rams after 24 seasons at Nolan Catholic High School where he won seven state championships.